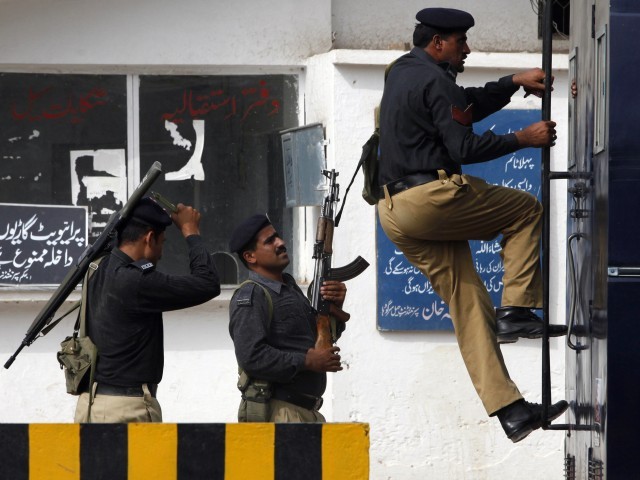 If the police takes requisite action there is every likelihood that crime rates will fall. PHOTO: REUTERS

A few days ago, I received frantic calls from some people from my village in Kamber-Shahdadkot district, informing me of an attack on the village by bandits.

I was told that not only were the police absent from the village, the SHO was also unwilling to lodge a case against the criminals.

A few victims even travelled to Karachi to meet the Sindh home minister but, despite their best efforts, they were unable to get an appointment, while their complaints with the IGP, home department and CM complaint cell are yet to receive any response from our so-called democratic government.

Incidents of kidnapping for ransom are on the rise in Sindh, especially in Karachi, where there is a street crime galore. No action is taken against gangs and mafias operating in different areas until and unless a ‘VVIP’ – people sitting in power corridors and state agencies – fall prey to their activities.

A recent example of this double standard (if you may call it that) is when a few personnel of law enforcement agencies in Sultanabad were robbed.

The city’s police and law enforcement forces swung into action, became hyperactive and within an hour and a half they mounted raids to apprehend the criminals.

Similarly, people of Dalmia (Gulshan Town) have been complaining for years against Kalu Current – a notorious dacoit and smuggler of the area, who had also been a suspect in many rape cases.

What followed was a cleanup operation and within a few hours Kalu Current, along with five accomplices, was killed by a local paramilitary unit.

If police and law enforcement agencies take similar initiatives for common citizens, there is every likelihood that crime rates will fall and our streets will become safer.

Although the police always fall back on the excuse of not having enough resources or manpower to take action, one fails to understand why this pretext only applies to the lesser mortals.