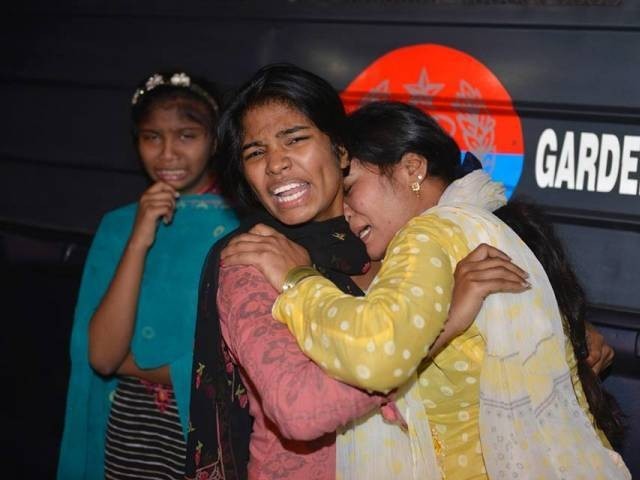 Women mourn the death of relatives after a bomb blast in Lahore on March 27, 2016. PHOTO: AFP

In a broken down house in some sleepy part of Lahore, a man woke up knowing it was the very last time he was ever doing so. Perhaps he watched the sun rise one final time, perhaps overwhelmed by its beauty for a few seconds he doubted himself. Perhaps he wondered how many people will miss him, perhaps he looked forward to what he was promised after death, perhaps he was just tired.

We don’t know anything about him, not his identity nor his dreams, ambitions, fears and above all his demons. We don’t know who he left behind; a family to grieve for him, a wife to miss him, a lover to long for him.

All we know is that that man left home that day with the express purpose of killing children and women, of destroying homes and irrevocably wrecking countless lives and of giving up his life for this purpose.

It is easy to condemn such a man as a monster; his act was nothing short of monstrous. But without condoning or condemning, without writing him off as a Grimm-esque villain, for a second, imagine the tormented workings of a mind like that? It is deranged and unhinged, a constantly dark place.

What can fuel such overpowering hate, such bitter vehemence against children; the purest amongst us? What a scary place his mind must be, what constant horrors must he have gone through to be driven to this, what tragedies he must have suffered. This man, as much as we hate him right now, was as much a victim as he was a foe.

But in times of grieving and chaos like these, we need someone to blame. If not him, then who?

Religious extremism is an easy answer. After all, those who took responsibility of the attack confirmed that the targets were Christians. After all, religion is used as a tool to mind wash otherwise reasonably law-abiding young men and turn them into beasts. But Islam condemns the killing of women and children.

“What can men do in the face of such reckless hate?”

How do you stop a man who wants to kill children so much he is willing to die for it? There was neither rhyme nor reason to this, no warning; this could not have been stopped.

Maybe those faceless men who, in greed and lust, use such men for their own goals? Yes, but they are men unidentified and unknown. Vague shadows just outside the periphery of our collective visions; there is neither conviction nor satisfaction in pointing fingers at shadows.

It is comforting to direct our anger at the government and the terrorists alike — merchants of pattern and anarchy both. To blame religion, hunger, poverty, ignorance and illiteracy; but without knowing the man who did this, we cannot find definitive answers. And with him, we lost our only chance of closure; whatever of it is available atop a pile of 72 innocent corpses.