“The dirtiest sewer, starvation or even death would’ve been preferred over working for these pimps” 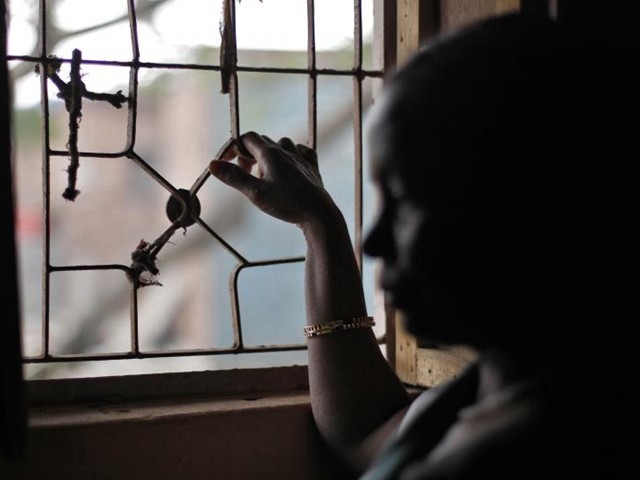 Due to the lack of rehabilitation offered to unfortunate souls like these, a large variety of them end up becoming criminals at some point. PHOTO: REUTERS

Human trafficking, prostitution, drug making/buying/selling have now become universal social issues. Each year 1.2 million children are trafficked around the world, 100,000 children are forced into prostitution and moved from one street corner to the other and numerous children are lured into the emerging drug business.

During a conversation I had with Amal*, a human trafficking victim, I was left appalled by the details she provided me with.

Amal was kidnapped at the tender age of 13 from the factory near her village. She described the incident in the following words;

“It wasn’t like they show it in the movies, there was neither chaos nor any noise. Someone covered my mouth and the next thing I remember was being in a truck full of men who had their faces covered. I couldn’t even breathe and it was so stuffy. In the darkness of the night, all I could see were the glistening eyes of these vicious men.”

Referring to the times she had to spend giving up her body to strangers, she said,

“The dirtiest sewer, starvation or even death would’ve been preferred over working for these pimps who traded our innocent souls and bodies for wads of cash.”

Shedding light on the unfortunate incidents she had to face while trying to escape, she told us,

“The police had caught my friends and me in various unsuccessful fleeing attempts. People in government positions used us for their pleasure several times and we were thrown into prison without reason on several occasions.”

Amal had seen some of the darkest days any child her age could’ve even imagined seeing during that span of three years she was being trafficked.

“I’ve been to prison over six times and been raped countless times. I don’t understand why and how they don’t look at us as victims. Why don’t they ever think about their daughters when they look at us? We are quarter their age. Why does their conscience suddenly die when they look at us?”

After all these girls, and Amal, have been through, do they really deserve to have a criminal record associated with their name?

The future of victims

After their unfortunate involvement in these crimes, a large part of their ruthless journey is spent trying to escape or trying to look for various ways to earn a living in a more appropriate, legal manner. It is understood that during this journey many commit crimes oblivious to the consequences and for some, being able to escape from the horrendous situation is more important than being sent to prison.

In order to escape the hell these victims find themselves in, some stumble across the opportunity to commit petty crimes, including trying to steal food or money. Some start substance abuse in order to numb their minds against the emotional scars they were inflicted with. Most times, substance abuse becomes an indirect prerequisite for street prostitutes and drug sellers.

However, the main question here is, should we really hold either of these crimes against them? Do we think they have a choice in committing these crimes? What’s more upsetting is the fact that it’s always the girls that are caught during raids and sent to prison rather than the owners.

Instead of rehabilitating the victims, society further labels these victims as ‘hoes’ and ‘sluts’. Therefore, their emotional torture doesn’t stop once they’ve been freed from the clutches of their abductors.

Surviving victims don’t have any other option other than staying put in their current situation. Due to the history of crime attached to their names, they are shunned by their families, have difficulty finding jobs, their siblings and children become ineligible for marriage and they remain black listed in society for an indefinite time period.

Due to the lack of rehabilitation offered to unfortunate souls like these, a large number of them end up becoming criminals.

According to psychology, major factors of youth involvement in crimes are poor parental discipline and supervision, family conflict, community disorganisation and vast opportunities to commit crimes. As the literacy rate is at an alarming low – especially in the lower class, amongst boys and girls – crime is the easiest path to follow. Society is filled with conniving criminals who are ready to promise innocent children love, attention, safety and fulfilment of their wishes.

The responsibility of the government

Shouldn’t it be the government’s responsibility to provide safe platforms for these children?

The government should provide quality education, build rehabilitation centres and have counselling during their prison terms. If this can be done, these innocent victims may have another chance at life again.

It all boils down to a collective effort by society and the government to address alarming issues such as these.

* Names have been changed to protect the identity of the victims

The author is currently studying Psychology at Szabist and plans of becoming a successful clinical psychologist aiming to eradicate child sexual abuse from the society.

Are Pakistani brides actually ready to pay up to Rs66,000 for one night’s wedding makeup?