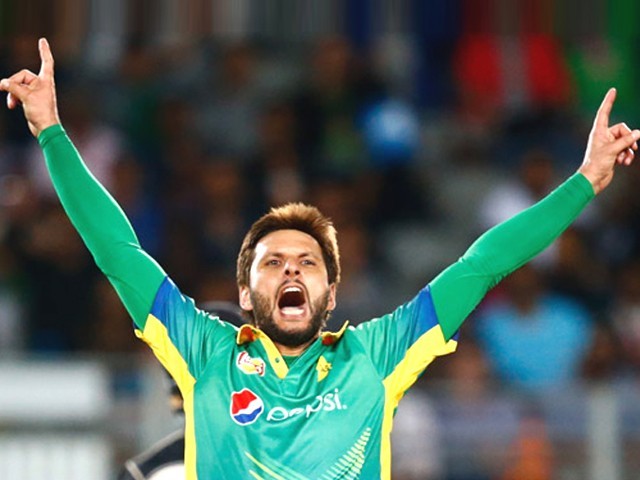 Do we talk about the man who when swings at the cricket ball, a whole nation holds its breath willing the ball to sail over the boundary line?
Photo: AFP

Do we talk about the man who with his trademark star man pose instils hope into a nation?
Photo: AFP

The list of questions are endless and the answers even longer.

Simply put, Afridi is an enigma that can’t be explained, an enigma that defies all logic and belief. If you look at his stats, they will seem ordinary or even pathetic to some, especially when you compare it to the fact that he has been playing for 21 years, so what makes him so revered? What makes him one of the most popular men in the country?

It’s because of his personality; everywhere you go Afridi follows you, switch on the TV and he is starring in a TV commercial, go to a store to buy a bottle of Pepsi, his face is on the bottles and while you are driving around the city, his face will be on one billboard or another. The more important question though is, who placed him on this pedestal and how did he reach this stature?

Strip away everything from the man, the stats, logic and reason. What you have at the end is an entertainer and a man who gives this country hope. Each time he comes out to bat, you know he’s going to swing at each ball like a possessed man. Regardless of the outcome, everyone cheers him on because they identify with him, this is the person they want to be, the flashy arrogance, the devil may care attitude and the freedom to be himself. They see the ball as the pent up problems in their lives and they picture themselves in Afridi’s place smashing their problems out of the park. They love the escape Afridi provides them from real life, even if it is for a few seconds.

Afridi is also highly respected and loved because of his memorable performances against the age old enemy, India. Who can forget the two sixes against Ravi Chandran Ashwin? The four sixes against Harbhajan Singh, the smashing century in the 99 series and his Asia cup performance against Bangladesh?

Afridi has been central in some of the finest moments in history of Pakistan cricket history. He played the innings of his life during the 2009 World T20 in the semi-final and the final, as our nation reeled from a horrific attack on the Sri Lankan national team in Lahore.

How can we forget his Asia cup performance against Bangladesh?
Photo: AFP

Our national team gave us a glimmer of hope in the darkness by lifting the trophy and there, right in the centre, stood Afridi, hitting the winning runs and making the star man pose. This memory will be etched in the brains of every cricket loving Pakistani for a long time to come.

Afridi’s initial years in the team

When Afridi burst on to the scene with his mind boggling century, it was in the midst of a cricketing revolution started by Sri Lanka during the ’96 World Cup. Power hitters were in demand. Australia had Adam Gilchrist, India had Virender Sehwag, Sri Lanka had Sanath Jayasuriya, New Zealand had Scott Styris and Pakistan, well Pakistan was filled to the brim with them, from Saeed Anwar to Afridi to Imran Nazir to Abdul Razzaq.

Afridi is the last of that generation, the last man standing and the last dinosaur, so to speak in a harsh and evolved world. The vestiges of our long gone childhood will be over, nothing but the memories of Afridi, Waqar Younis, Wasim Akram, Inzamamul Haq, Saeed Anwar and Shoaib Akhtar will remain.

The vestiges of our long gone childhood will be over, nothing but the memories of Afridi, Waqar Younis, Wasim Akram, Inzamamul Haq, Saeed Anwar and Shoaib Akhtar will remain.
Photo: AFP

The torch has now been passed onto AB de Villiers, Kane Williamson, Virat Kohli and so on; the young guns will carry the torch now.

Afridi has inspired a whole generation to play cricket and arguably a whole nation in Afghanistan, for better or worse he has been the light that called out to people to try their hand at cricket. Everyone, whilst playing or watching cricket, has dreamt about being Afridi.

When he plays his last match today, a legend spanning over two generations will say goodbye to us. Cricket will never see another Afridi again, a man who swung between sheer lunacy and sheer brilliance. When he comes out to bat today and swings his bat to hit the ball, it may seem as if nothing has changed, but after today’s match, the cricketing world will forever be changed.

Cricket will never see another Afridi again, a man who swung between sheer lunacy and sheer brilliance.
Photo: AFP

The age of Afridi has come to an end.