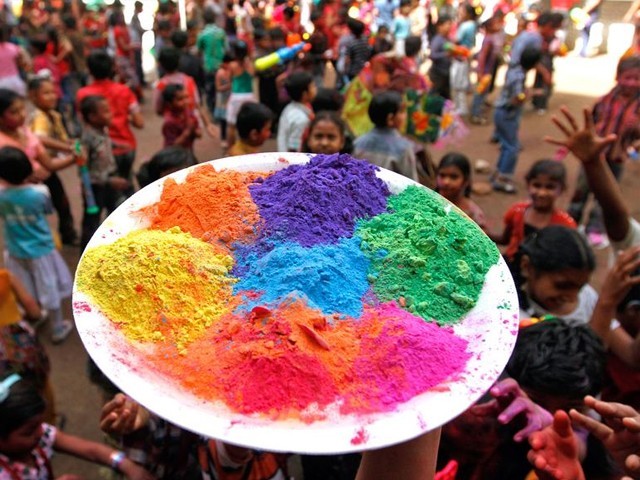 It is impossible to separate the two cultures, meshed into one another, owing to their peaceful coexistence for centuries in the subcontinent. PHOTO: REUTERS

Phagwa, more commonly known as Holi, celebrated on the full moon day of Phalgun (the 12th month of the Hindu calendar), is a festival that heralds the arrival of spring. Celebrated with colours, it is a symbolic expression of the changing of temperatures and the blossoming fields of green.

My childhood memories are consumed with numerous instances from Holi. Living in a predominantly Hindu neighbourhood in Delhi, and belonging to one of the few Muslim families, we were surrounded by bright, colourful faces on the day of Holi.

The enthusiastic crowd did not hesitate to smear my parents with colour the second they stepped out, making them blend in with them and their equally vibrant surroundings. Eventually, my siblings and I joined the celebrations as well. I realised that when everyone is engaged in a joyous spirit, it’s difficult to identify anyone.

And that is why, Holi, as I envision it, is the perfect way to witness the spirit of universal brotherhood beyond colour, creed, caste or social status.

If taken in its true spirits, Holi was never meant to be a religious festival, singled out by a certain faith. Though, like other religious festivals, it is symbolic of a legend – the story of Holika Dahan and her triumph over evil.

However, the context of its celebration is said to have evolved to the legend of Krishna and Radha.

Krishna, as a young boy, used to complain to his mother, Yashoda, about having a dark complexion, while his beloved Radha was fair.

The conversation between a complaining son and his doting mother is narrated beautifully in a famous folk song:

“Why am I dark, while Radha is so fair?”

“The kohl-eyed lady has swept you with her magic.

And one day, to console Krishna, she teasingly said,

“What’s in a colour? Go and smear Radha’s face with any colour you like.”

And Krishna, out of love for Radha, smeared her with red gulaal (powdered colour).

And there commenced the playing of colours and gopis between Krishna and Radha along with their friends. Their romance with playing Holi has been immortalised in many miniature paintings. Krishna and Radha playing Holi with their Gopis.

This has a touch of Mughal art. Another painting of Krishna and Radha enjoying the colours of Holi with their Gopis.

Mughal Emperors admired Holi as well, for its association with colour and romance. They were so fond of it, that they brought the practice of playing Holi to their courts and palaces.

Akbar is no exception, considering his secular and tolerant stance towards other religions and his marriage to a Hindu queen, Jodha Bai.

Jahangir, the romantic art connoisseur is documented to have played Holi with his queen, Nur Jahan, in his palace and called it Eid-e-Gulabi. One can imagine the ecstatic aura that must have taken place in the palace by red gulaal, rose petals and rose water sprinkled all over during the royal play.

Auranzeb’s stance on the colours of Holi came as a surprise to me.

Lane Poole, in his book, Aurangzíb and the Decay of the Mughal Empire wrote,

“During his time there used to be several groups of Holi singers who besides reciting libertine lyrics also indulged in salaciousness, accompanied by various musical instruments.”

Bahadur Shah Zafar’s verses on Holi are now sung as a part of the Phaag (folk songs of Holi). One of the most sung verses are:

(Why drench me with color spray,)

Now my prince, I will swear at you)

(After long have I’ve got my hands on you, how will I let you go?

Today is Holi, and perfect time to catch hold of you) This is Mughal Emperor Jehangir playing Holi in his palace.

Sufi poets too eulogised Radha and Krishna’s romance in Holi, while expressing their love for their revered Sufi saints or even God.

It is Shah Niyaz’s Hori Ho Rahi hai that is immortalised by Abida Parveen.

Colour has become of Hazrat Ali (AS) and Hasan (AS), Hussain (AS) are playing.

People are calling others from all over,

What unique and clever players (Hasan and Hussain) that they coloured the entire world.

Niyaz (the poet) sprinkles bowlfuls of colour all around,

The same colour that comes out of thousands of pichkaaris ( spray guns)).

(I shall play Holi, beginning with the name of Allah.

The name of Prophet is enveloped with light,

He only makes us play with colours, who annihilates with Allah)

Amir Khusrow relates to Holi in fascinating ways. Khusrow refers, not just to the colour or the play, but to the birth place of Krishna (Mathura) in the famous Aaj Rung Hai:

(In summary: I saw Gokul, Mathura (birth place of Krishna) and even East to West I roamed, but I did not find anyone with a colour like yours. My heart is enamoured by your colour, hence colour me in your shade, my master.)

Another lesser known verse I came across is,

(I shall play Holi as Khaaja has come to my home,

Blessed is my fortune, O’ friend,

As Khaaja has come to my courtyard.)

There are various other examples. What one concludes from all this information is that, no matter what, it is impossible to separate the two cultures, meshed into one another, owing to their peaceful coexistence for centuries in the subcontinent. These celebrations of culture are all about love and have no place for hate and discrimination.

So let’s celebrate this Holi with an open mind, and more importantly, an open heart!