Kashmir Day holiday is fine but you have an issue with Holi? 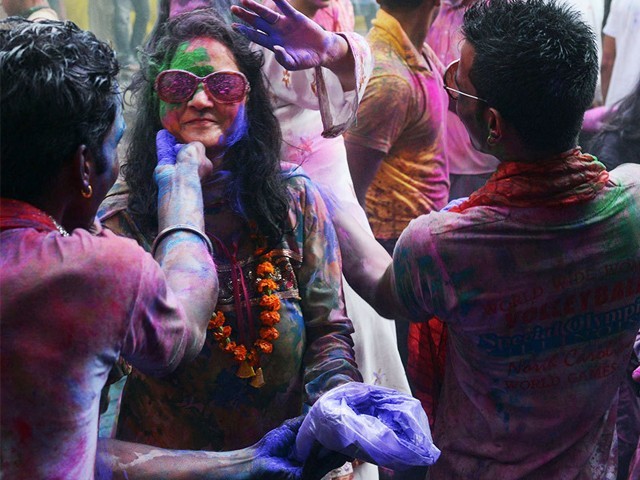 It is high time that as citizens of the land of the pure, understand this and accept our people everywhere, who belong to various religions. PHOTO: AFP

Nothing brings out excessive patriotism in Pakistanis like blatant jingoism and bigotry.

The Pakistani government recently agreed to allow the Hindu festival of Holi and the Christian observance of Easter as public holidays. This, however, did not sit well with our patriotic, bleed-green Pakistanis who took to social media to portray their “rage”.

In short, all hell broke loose. I, for one, do not understand the reason behind this uproar. The decision seems absolutely justified as people belonging to minority groups should be able to observe and celebrate their religious events, just like Muslims do.

Why is it so hard to accept this?

Many people I came across were of the view that if Hindus have to celebrate Holi, they should simply take the day off.

Why make it so for everyone?

Well, my question to them is this, would they be compensated for the day off if it’s not a federal holiday?

Would their employers (who probably belong to the same religion as the majority) be as accommodating to their religious ceremonies, without an official notice?

No, they wouldn’t be.

If they were, there wouldn’t have been a need to pass such a notification by the government. And this just highlights our hypocrisy as a society. Aren’t we the same people who rejoiced and reveled when the mayor of New York announced Eid as a public holiday in his city?

Where was our uproar then? As for those using the excuse of “an added holiday” which would “affect their work”, I ask them, where is their concern when the government announces holidays for Kashmir Day, Defence Day or Resolution Day? Where are their pitchforks when holidays for mourning, due to strike, on a politicians death or birth day, due to cricket matches or religious days of Sufi saints are announced? For that matter, where is their uproar when we get three or four days instead of two off on the occasions of Eid and Muharram?

Oh Pakistani, hypocrisy be thy name!

It boggles my mind to see that something so basic a right is being debated upon by our “pious Muslim” brothers who wouldn’t bat an eye before disowning the white on their nation’s flag. And ironically, these are the same people who chant the chorus of “we are all one” after claims of racial cleansing and targeted killing are made by minority members.

I believe that the root cause of this hypocrisy is the ideology of Pakistan. When people, from a very early age, are fed the idea that Pakistan came into being only because of religious differences and for fighting “infidels”, how do we expect them to be welcoming and accommodative of minority members in their area, city or country?

This step should have been applauded. It should have been taken as a victory by Pakistanis against those who call this country a nation full of bigots, who label Pakistan as an intolerant state. This should have become a matter of pride over the fact that we are following the footsteps of Prophet Muhammad (PBUH) who always preached freedom of religion to all minority groups. Yet we remain ignorant and proved, once again, that we are nothing but a band of mindless dogmatists who are incapable of tolerance.

Getting a holiday on Holi or Easter will not change your religion. Wishing someone “Happy Holi” or “Happy Easter” will not make you non-Muslim. Respecting other religions will not strip you of your own. It is high time that as citizens of the land of the pure, understand this and accept our people everywhere, who belong to various religions.

And to all my Hindu brothers and sisters, here’s to hoping that you have a wonderful, festive day.

She is a History major at the University of Karachi, who is specializing in contemporary history and is mainly interested in the study of culture and gender.

Would surrogacy ever be accepted in Pakistan?