I love the UN, but it is failing 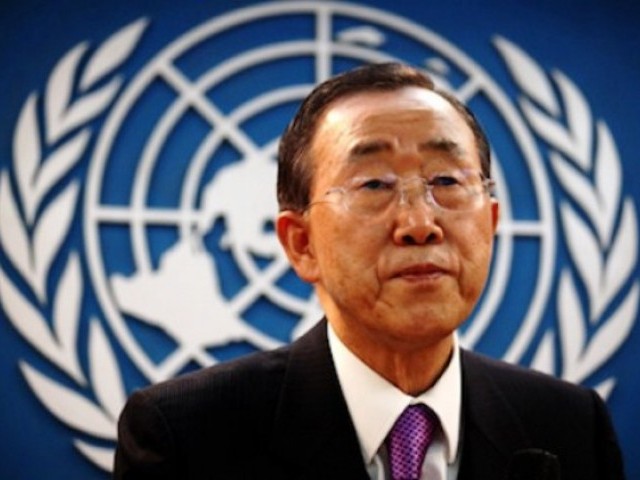 Secretary General Ban Ki-moon is a man of great integrity, and the United Nations is filled with smart, brave and selfless people. Unfortunately, far too many others lack the moral aptitude and professional abilities to serve. PHOTO: AFP

I have worked for the United Nations for most of the last three decades. I was a human rights officer in Haiti in the 1990s and served in the former Yugoslavia during the Srebrenica genocide. I helped lead the response to the Indian Ocean tsunami and the Haitian earthquake, planned the mission to eliminate Syrian chemical weapons, and most recently led the Ebola mission in West Africa. I care deeply for the principles the United Nations is designed to uphold.

And that’s why I have decided to leave.

The world faces a range of terrifying crises, from the threat of climate change to terrorist breeding grounds in places like Syria, Iraq and Somalia. The United Nations is uniquely placed to meet these challenges, and it is doing invaluable work, like protecting civilians and delivering humanitarian aid in South Sudan and elsewhere. But in terms of its overall mission, thanks to colossal mismanagement, the United Nations is failing.

Six years ago, I became an assistant secretary general, posted to the headquarters in New York. I was no stranger to red tape, but I was unprepared for the blur of Orwellian admonitions and Carrollian logic that govern the place. If you locked a team of evil geniuses in a laboratory, they could not design a bureaucracy so maddeningly complex, requiring so much effort but in the end incapable of delivering the intended result. The system is a black hole into which disappear countless tax dollars and human aspirations, never to be seen again.

The first major problem is a sclerotic personnel system. The United Nations needs to be able to attract and quickly deploy the world’s best talent. And yet, it takes on average 213 days to recruit someone. In January, to the horror of many, the Department of Management imposed a new recruitment system that is likely to increase the delay to over a year.

During the Ebola epidemic, I was desperate to get qualified people on the ground, and yet I was told that a staff member working in South Sudan could not travel to our headquarters in Accra, Ghana, until she received a new medical clearance. We were fighting a disease that killed many thousands and risked spinning out of control and yet we spent weeks waiting for a healthy colleague to get her forms processed.

Too often, the only way to speed things up is to break the rules. That’s what I did in Accra when I hired an anthropologist as an independent contractor. She turned out to be worth her weight in gold. Unsafe burial practices were responsible for about half of new Ebola cases in some areas. We had to understand these traditions before we could persuade people to change them. As far as I know, no United Nations mission had ever had an anthropologist on staff before; shortly after I left the mission, she was let go.

The heads of billion-dollar peace operations, with enormous responsibilities for ending wars, are not able to hire their immediate staff, or to reassign non-performers away from critical roles. It is a sign of how perversely twisted the bureaucracy is that personnel decisions are considered more dangerous than the responsibility to lead a mission on which the fate of a country depends.

One result of this dysfunction is minimal accountability. There is today a chief of staff in a large peacekeeping mission who is manifestly incompetent. Many have tried to get rid of him, but short of a serious crime, it is virtually impossible to fire someone in the United Nations. In the past six years, I am not aware of a single international field staff member’s being fired, or even sanctioned, for poor performance.

The second serious problem is that too many decisions are driven by political expediency instead of by the values of the United Nations or the facts on the ground.

Peacekeeping forces often lumber along for years without clear goals or exit plans, crowding out governments, diverting attention from deeper socioeconomic problems and costing billions of dollars. My first peacekeeping mission was in Cambodia in 1992. We left after less than two years. Now it’s a rare exception when a mission lasts fewer than 10.

Look at Haiti: There has been no armed conflict for more than a decade, and yet a United Nations force of more than 4,500 remains. Meanwhile, we are failing at what should be our most important task: assisting in the creation of stable, democratic institutions. Elections have been postponed amid allegations of fraud, and the interim prime minister has said that,

“The country is facing serious social and economic difficulties.”

The military deployment makes no contribution at all to solving these problems.

Our most grievous blunder is in Mali.

In early 2013, the United Nations decided to send 10,000 soldiers and police officers to Mali in response to a terrorist takeover of parts of the north. Inexplicably, we sent a force that was unprepared for counterterrorism and explicitly told not to engage in it. More than 80 per cent of the force’s resources are spent on logistics and self-protection. Already 56 people in the United Nations contingent have been killed, and more are certain to die. The United Nations in Mali is day by day marching deeper into its first quagmire.

But the thing that has upset me most is what the United Nations has done in the Central African Republic. When we took over peacekeeping responsibilities from the African Union there in 2014, we had the choice of which troops to accept. Without appropriate debate, and for cynical political reasons, a decision was made to include soldiers from the Democratic Republic of Congo and from the Republic of Congo, despite reports of serious human rights violations by these soldiers. Since then, troops from these countries have engaged in a persistent pattern of rape and abuse of the people — often young girls — the United Nations was sent there to protect.

Last year, peacekeepers from the Republic of Congo arrested a group of civilians, with no legal basis whatsoever, and beat them so badly that one died in custody and the other shortly after in a hospital. In response there was hardly a murmur, and certainly no outrage, from the responsible officials in New York.

As the abuse cases piled up, impassioned pleas were made to send the troops home. These were ignored, and more cases of child rape came to light. Last month, we finally kicked out the Democratic Republic of Congo soldiers, but the ones from the Republic of Congo remain.

In 1988, my first job with the United Nations was as a human rights officer in Cambodian refugee camps along the Thai-Cambodian border, investigating rapes and murders of the poor and helpless. Never could I have imagined that I would one day have to deal with members of my own organisation committing the same crimes or, worse, senior officials tolerating them for reasons of cynical expediency.

In the run-up to the election of a new secretary general this year, it is essential that governments, and especially the permanent members of the Security Council, think carefully about what they want out of the United Nations. The organisation is a Remington typewriter in a smartphone world. If it is going to advance the causes of peace, human rights, development and the climate, it needs a leader genuinely committed to reform.

The bureaucracy needs to work for the missions; not the other way around. The starting point should be the overhaul of our personnel system. We need an outside panel to examine the system and recommend changes. Second, all administrative expenses should be capped at a fixed percentage of operations costs. Third, decisions on budget allocations should be removed from the Department of Management and placed in the hands of an independent controller reporting to the secretary general. Finally, we need rigorous performance audits of all parts of headquarters operations.

Secretary General Ban Ki-moon is a man of great integrity, and the United Nations is filled with smart, brave and selfless people. Unfortunately, far too many others lack the moral aptitude and professional abilities to serve. We need a United Nations led by people for whom “doing the right thing” is normal and expected.