Kapoor & Sons: Your own dysfunctional family 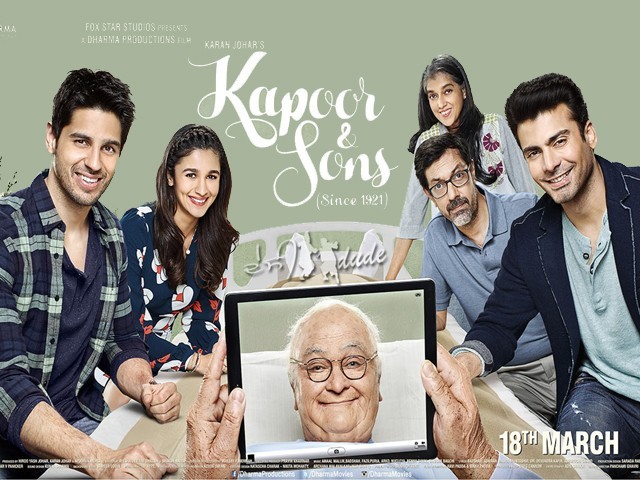 Despite Alia Bhatt’s introduction as a potential trigger to the ticking time bomb that is the edgy Kapoor siblings’ relation, the film steers clear of the Kuch Kuch Hota Hai (1998) and Kal Ho Naa Ho (2003) variety of regressive storytelling.

All right, now here is a definitive list of all the people who under no circumstances can miss out on the chance to watch Kapoor & Sons while they can. If you are tired of living your life under the weight of all the expectations that come your way for acting to fulfil the ‘faultless child’ tag that you are burdened with and need to break free from the shackles of being eternally considered responsible. If living forever under the shadow of a successful sibling, always thought off as second best and immature has worn you out. If constant bickering about anything and everything, right down from a leaked pipe all the way up to the serious business of household finances, is slowly eating up your already gone sour relationship. And finally, if you are a weed-smoking, porn-watching octogenarian who is acting as the glue for a family slowly crumbling under the load of anger and resentment, then you better stop whatever the hell it is that you are doing right now and go grab yourself a ticket, because nothing can be as bizarrely therapeutic as watching the latest release from Dharma productions, Kapoor & Sons.

It’s not just what has been noted above that will help all of you out there in a similar predicament to empathise with in the film. The fact every member of the Kapoor clan has additional skeletons in their respective closets is what makes this dysfunctional family such a curatively riveting watch.

As for the rest of you, I bet you all have personal demons of your own that Kapoor & Sons can surely help exorcise.

On the face of it, it is a relatively simple drama. Kapoor & Sons is the story of a mercurial Punjabi khaandaan (family) where the ever squabbling pair of ageing parents (Rajat and Ratna) have two sons, Rahul and Arjun who are not on the best of terms with each other. With such strained relationship dynamics this ought to be a recipe for dinner table disaster. But fear not, things aren’t coming to a head any meal-time soon since the brothers are living entirely separate lives in London and New Jersey.

The perfect elder one, Rahul, is a bestselling novelist based in London. While the younger one, Arjun, is a struggling writer and a drifter, currently working as a bartender in New Jersey. One fine day, the quirky grandfather (Rishi Kapoor) whose favourite prank is playing dead, actually suffers a heart attack and the separated siblings are summoned back home to be by his side and all familial hell breaks loose. What follows is a household that’s teetering on the brink. Seething with bitterness, yet busy with the daily chores of life – like all dysfunctional families – the Kapoor clan too is always just one dinner-time talk away from reconciliation, but yet at the same time, also just one small act away from completely unravelling into total disintegration. But there is still one person who is obliviously enjoying the reunion: daddu. Now having experienced death at close quarters with the attack, the eccentric patriarch of the family has a simple final wish. A family photograph! But amidst all the Kapoor madness, this straightforward desire turns out to be anything but. This could be the account of any family anywhere and that is what makes Kapoor & Sons special. The drama is a bitter-sweet slice of your own life. It could have been Sardar & Sons or even Khan & Sons. Heck! ‘Put your own family name’ & Sons, could very well have been the title of the movie, for each of you would find your life parallel to the narrative of the movie at some indeterminate point.

The tale is fascinatingly engaging despite being rooted in the everyday. You might even describe the plot as wafer-thin but what sets it apart from others is the command that Shakun Batra, the director has on the art of storytelling.

Watching the trailer you could be forgiven for confusing Kapoor & Sons as yet another archaic love troika from the stables of Karan Johar. Despite Alia Bhatt’s introduction as a potential trigger to the ticking time bomb that is the edgy Kapoor siblings’ relation, the film steers clear of the Kuch Kuch Hota Hai (1998) and Kal Ho Naa Ho (2003) variety of regressive storytelling. Alia plays her hyper, ditzy, blonde girl act yet again and along with Sidharth Malhotra, the duo is the weakest of the lot in terms of acting. It actually might be a little harsh to bracket Siddharth with Alia, mainly because he was saddled with a one-toned character and would have performed a lot better had his younger-brother character been crafted in a layered manner.

But there were no such characterisation issues with the elder sibling, Fawad Khan who owns the movie with his nuanced performance. His range of complex emotions is a total show-stealer and without giving too much away, hats off to him for displaying some real artistic cojones, playing a complex multi-layer character that no other leading Bollywood actor would have dared touched with a barge pole.

Rajat Kapoor and Ratna Pathak Shah play the almost alienated couple with much ease. The pair manages to showcase love and resentment in a marriage so well, that they will remind you of your own parents. Rishi Kapoor with all the prosthetic work, as the slightly naughty, partly grumpy and completely hedonistic grandfather, lusting after Mandakini in a wet sari from Ram Teri Ganga Maili (1985), is the cherry atop this captivating familial cake. The choice of setting, the town of Coonoor is a spectacular idea and the cinematography does the hill station full justice by capturing the freshness with frames where you can, well, almost smell the greenery.

Dialogues are as un-Bollywoodish as you can imagine with a lot of subtext and nothing silly, forced or fake about the lines.

Speaking of lines, there is one in Leo Tolstoy’s Anna Karenina regarding families.

“All happy families are alike, each unhappy family is unhappy in its own way.”

The dysfunctional Kapoor clan’s version of unhappiness has given us an absorbing, heartfelt and curative family drama that might help see our own imperfect families in a better light.