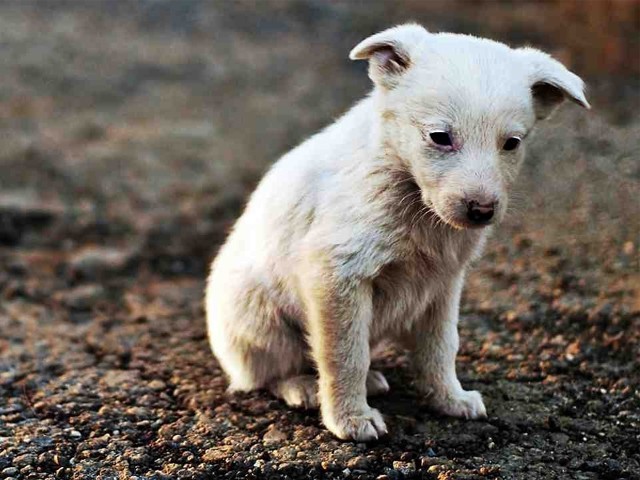 While the rest of the populace preaches progress, equality and humanity we can't even teach ourselves the basics of living a moral and ethical life? This is a classic example of reversal of roles which is irony at its best. Human beings acting like animals. PHOTO: YOUTUBE

I’ve been a quiet spectator of the brutal killings of stray dogs in Karachi for a very long time and despite the fact that it has enraged me time and time again, I’ve kept quiet only to realise that it is in times like these when you acknowledge the wrongdoing happening before you. You either become a silent observer boiling with rage on the inside or you try to make a difference despite the possibility that your efforts may prove to be futile.

I have recently come across several Facebook posts talking about stray dogs being shot point-blank by Cantonment Board Clifton (CBC). I kept quiet even though my insides hurt by the graphic details given on the internet. Right after that, I came across yet another case which completely repulsed me. I knew some measure of work had to be done to spread awareness, at the very least.

I got in touch with the person whose post I had come across to enquire for further details. Emaan Mahmud, a Liberal Arts teacher at the Indus Valley School of Art and Architecture, was extremely cooperative and supportive, and told me the entire story. As she walked out of her house to find out what was going on, she was informed by her domestic help that CBC had gone off on their shooting spree again. One dog was found dead while another was thoroughly injured, hiding under the thorns writhing in pain. Without wasting any time she called the Ayesha Chundrigar Foundation (ACF) for help and, along with the assistance of the foundation and her workers, she managed to get the dog into safe hands. The dog is currently under the care of the ACF recovering from the three bullet wounds on his right shoulder.

This is just one case amongst the hundreds that happen every single day.

We’ve heard of several other forms of tortures that these strays go through. They’re often picked up, sedated and taken to remote places like Doh Darya and left there. Furthermore, time and time again they’re also castrated and left in utter pain. When complaints are lodged, CBC completely refuses to take blame. Because of their lack of assuming responsibility, many stray puppies are found every day because their mothers are killed. Not to mention the kind of trauma the dogs have to suffer even if they’re mere spectators of such incidents.

The lack of empathy our officials have enrages me. While the rest of the populace preaches progress, equality and humanity we can’t even teach ourselves the basics of living a moral and ethical life? This is a classic example of reversal of roles which is irony at its best. Human beings acting like animals.

The reason for killing these strays is that they’ve drastically increased in number; they’re spreading diseases and have become excessively violent. To begin with, if the government has enough funds to build a Disneyland in Lahore, how about investing in something that’s actually worthwhile? Like nurturing these strays? Fine, take them down if they’re seriously unwell but instead of shooting them point-blank, why isn’t medication use to reduce their pain? Bury them after in a respectable way instead of shooting them in front of their pups and then leaving them there to die? Why not help fund the very few initiatives we have for these helpless animals like the Ayesha Chundrigar Foundation? It doesn’t take a rocket scientist to understand that these acts are, in reality, completely heinous. The conductors of these acts will never understand how it feels to be this vulnerable and to be taken advantage of that vulnerability. This is a plea to stop this. There is a way to do everything. We’ve never fully understood that. It’s humiliating, to say the least.

The author is an aspiring journalist, currently an International Relations undergrad with a love for animals.