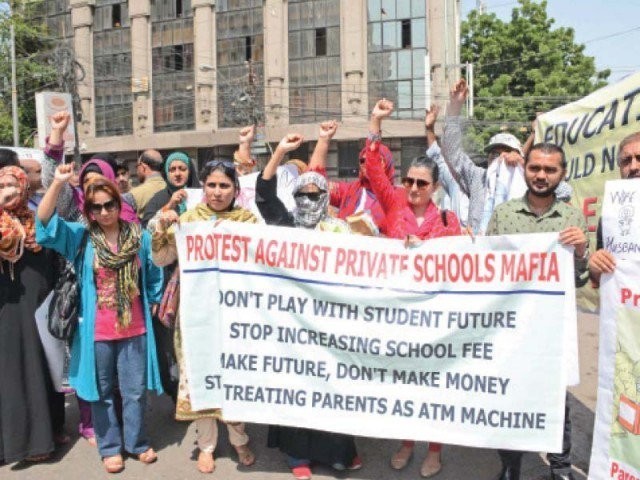 A protest was held outside Karachi Press Club where parents and other individuals spoke out against the raising of school fees in private schools. PHOTO: ONLINE

Back in September 2015, the parents of students studying in the top elite schools of Pakistan created an outcry over the unwarranted increase in school tuition fees. No one could have guessed the extent of effect the parents’ grievances would have on the elite private school systems.

The fee chalaans for the year 2015-16 incited an uproar, prompting them to protest and provoke the authorities to devise a system that can regulate the fee structures of these schools. They claimed that the ‘private school mafia’ – a term coined during the protest – treat them as ATM machines with an unjustified 18 per cent to 20 per cent tuition fee increase every year. Private Educational Institutions Regulatory Authority (PEIRA) was blamed for not doing anything to stop the excessive increase in fees for the year 2015-16.

The protest set the wheels in motion for the Punjab Private Educational Institutions (Promotion and Regulation) (Amendment) Bill 2015, which became a law on February 26. The new law, which has jolted the elite private schools in Punjab out of their escalating financial bliss, revokes the fee hike for the current financial year (2015-16) and limits any future increases to a maximum of five per cent after government approval. It also limits the amount of admission deposit from being more than the monthly tuition fee. A fine up to Rs2 million will be ensued to schools not complying with the law.

In response, outraged, All-Pakistan Private Schools Federation (APPSF) and the Pakistan Education Council (PEC), in a joint press conference, registered their protest against the ‘draconian new laws that seek to strangulate, not regulate, private schools’ by shutting down schools associated with them in Punjab on March 8 and 9.

In addition, some school administrations also sent letters to parents ‘notifying’ them about the impact this law would have on their children’s education if they do not condemn and protest against the law. The letters threatened to suspend all extra-curricular activities, increase class sizes and to cut back on various facilities provided by the school if the law was implemented.

As a former teacher, I am aware of the expenses of a private school system that eventually translates into a 10 per cent to 15 per cent fee hike annually. But don’t they all, elite and non-elite, insist that their sole purpose behind the conception of their schools is to provide quality education, the kind of education that our public educational authorities are unable to provide to the future generation?

Why then, one wonders, would they flat out refuse to provide that ‘quality’ education to their students for two days, after a bill which restricts them to do so within a reasonable financial budget is passed.

Why can’t these schools at least try to adhere by this law for a year before registering their protest?

Where are all the incessant promises of providing the best education possible?

Why does only a sky-scraping fee structure translate into ‘quality education’?

Too soon ended the farce of providing a public service in the guise of a business investment. The new bill may also discourage any future investment in the education sector.

However, business or public service, it is inarguably true that these mainstream private schools are providing the quality of education and child development that our public educational sector has failed to deliver. They do invest, quite dearly, in new teaching techniques, resources and student development programs even if, given their fee structure, these are only accessible to the upper class and the ever-aspiring middle class.

“Given the real rate of inflation and the rising cost of providing extraordinary security measures, it is not possible for private schools to operate with such stifling constraints,” says APPSF and PEC in a joint statement.

“Private-school rentals typically increase by a minimum of 18 to 20 per cent per annum… while salaries and other overheads increase by at least 15 per cent a year… Today, private schools educate approximately 60 per cent of the school-going (population) in Punjab and shoulder a large part of the government’s legal, moral, and constitutional responsibility.”

In hindsight, the uproar created by private schools over the impending threat of survival, if the law is not receded, seems justified. The elite circle of schools has raised their expenses, along with their standard of education, to a level that is difficult to turn back from. And who could blame them?

It was the sham of government schools that allowed these private school systems with outrageous fee structure to foster in our big cities over the years. For the last 20 years, they were given a free hand at providing the educational environment that parent’s desired, while the public education sector remains, to-date, a disgrace. If the authorities deem the law justified and accuse the private school sector of being unreasonable, then why don’t they show them how it’s done? Why don’t they dive into the muck of their own education system and provide the quality of education within their constricted budget? Perhaps, this will be reason enough for the government to finally increase the budget for education in the country.

The government is now struggling to tame the monster it created over the last 20 years. The upper and upper-middle class should not be excused either for nurturing this monster that eats away the biggest part of their income. Yes, they do work hard to buy good quality education for their children in order to improve their future prospects along with a desire to claim an elite status for their children. And in doing so, they have given unrestricted control to private school owners.

What remains to be seen now is if the law upholds or crumbles under the pleas and threats of the private school sector and if the future of a child will continue to depend on the fee a school can extort from its parents. And to see how the ‘quality’ of education offered by these private schools alter if this law is indeed upheld.

The author is a former English language teacher who is currently working as a freelance content writer/blogger.