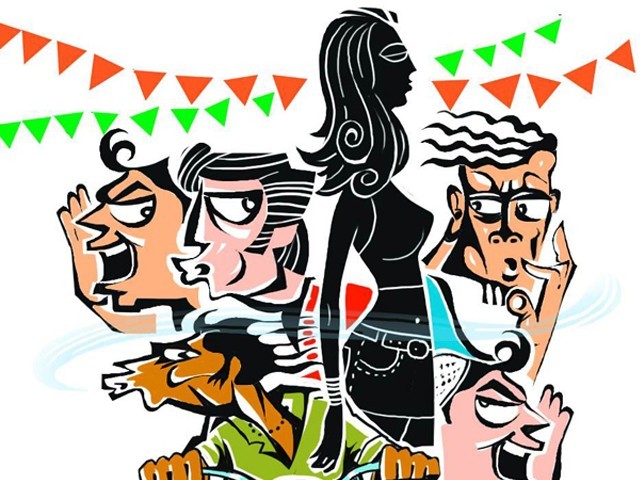 So many pairs of eyes were ogling me, some pretended that they were not staring if I made any eye contact and some were simply dheet (shameless). PHOTO: DNA INDIA

The four and a half months I spent in Turkey as an exchange student were the best part of my life. But after a while of living there, I had already started to miss my family and friends and couldn’t wait to be back with my loved ones in the country where my home existed. But there was something I had forgotten about my home country.

The day I was flying back to Pakistan, while waiting at the Istanbul Airport’s lounge, I realised what I had forgotten and what was awaiting me in Karachi. The excitement of returning home slowly began to fade when the thought of seeing so many Pakistanis after such a long time dawned on me, because with Pakistanis comes an uncomfortable and constant leering by men.

During my time in Turkey, I travelled a lot, and that too all, alone but not once was I uncomfortable or scared. Sitting and waiting at the Istanbul airport, surrounded with the people of my country, with whom I can relate, gave me a feeling of insecurity. Uncles and boys were staring at me. Not just me but other girls too. It was very uncomfortable for me, may be because I was no longer used to people looking at me without blinking. I got up and rushed to the washroom to escape the gawking eyes.

That wasn’t the end of it.

The real show began when, at the Karachi airport, I was waiting for my luggage to arrive. I was the only girl there without any family member or friend by her side. So many pairs of eyes were ogling me, some pretended that they were not staring if I made any eye contact and some were simply dheet (shameless).

I still shudder to recall a boy in that red, body-hugging, silk shirt. He would come in front of me every now and then, and make me cringe with his piercingly sharp stares. I wanted to cry and just run away from the situation.

As soon as I collected my luggage, I scurried outside the airport mindlessly assuming that I was headed towards safety. Little did I know that the stares would increase drastically! There were new characters in my living nightmare. From ‘gutka’ boys to toothless uncles, all had their eyes on me. Their sexual frustration was very evident on their faces. I felt disgusted to the extent that I prayed,

(I hope the earth opens up and swallows all of them whole!)

Yes, I was so terribly seething with anger that I wanted the end of their existence from this planet.

This wasn’t a first, nor was I alien to this hobby of sexually frustrated Pakistani men. I have experienced this from a very young age. It’s not just me but every other girl in this country who has this complain and is disturbed by this behaviour.

If a girl is waiting for her bus or van, people passing in cars not only stare but even honk to grab her attention. In fact, a girl in Lahore recently posted a status on Facebook about the exact same thing. She said when she gave the boys in the car no attention, despite them calling out to her and honking at her, they purposely sped up and hit her bicycle, causing her to fall off and receive injuries.

Similarly, in market places it is very common among men to catcall and sometimes whisper Masha’Allah leaving a woman flustered and feeling harassed. And the addas (fixed spots) that drivers have, where each and every step of the girls passing by is observed, inspected and discussed. It is not that only men deprived of education are into this distasteful hobby, but this activity is also popular amongst the literate. Last week, while waiting with friends at university, we were ‘checked out’ by the boys sitting behind us. One of them would say something that would make other two look at us and pass a remark or two about us.

This issue is highly disturbing. Being in my own country, it is unfair that I don’t feel free and safe. These rubbernecking eyes refuse to look away until a girl creates a scene or screams,

(What is your problem?)

Why has it become a challenge for a girl to move without hundreds of eyes on her? Why is the infuriating phrase, “bachi check kar” (check out that chick) not considered offensive anymore?

Whenever, I see men leering at women, I have a strong desire to poke my fingers into his eye balls and scream,

“STOP STARING AT US, YOU CREEP!”

Of all this, what makes me the angriest is when wives or mothers sit right next to these men, their husbands or sons, pretending to be completely oblivious of the ogling spree they are going on. They sit indifferent to their men gaping at other females with drooling faces.

The men of this society have become so shameless that things like, “Kya masla hai” (What is your problem?), “Ghar mein maa behan nahi hain?” (Haven’t you got mothers or sisters at home?) and “Kya dekh rahay ho?” (What are you staring at?), do not affect them anymore. But I am quite sure that if the women who accompany them grab their collars or they are given public beatings by the police, it would definitely teach them a lesson. Perhaps, that is the only way to beat the frustration out of these creepy men.

Call-to-action: Have you or anyone you know been a victim of harassment? Share your story with us! Email your experience to us, in a blog-post, at, [email protected]

The author is an undergraduate media student at the Institute of Business Management, Karachi. She tweets as @amna_zamani (twitter.com/amna_zamani)