I was not allowed to enter Memon Mosque in Karachi, because I am a woman 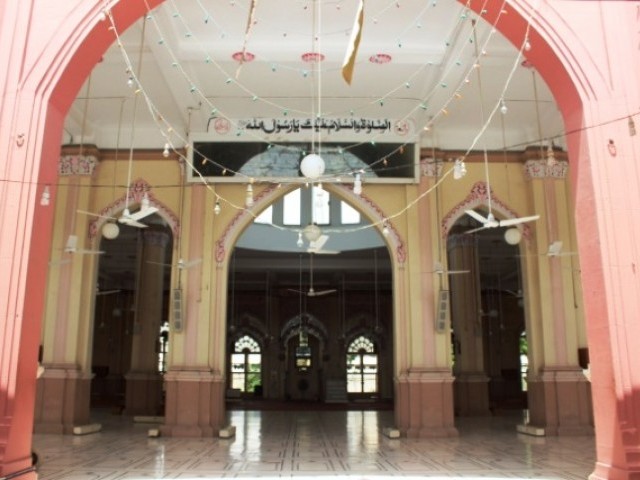 The man who stopped me from proceeding towards the inside of the mosque was a caretaker of the vicinity, as we discovered. It was as shocking for him to see me enter a mosque, as it was for me being stopped from entering. PHOTO: HAMMAD SHAKIL

A beautiful combination of chaos and serenity: yes, you are now in the most picturesque area of Karachi. An extension of Saddar town escalates towards the lighthouse, a grandiose Memon Mosque situated along the way. I had always seen this huge structure of reds while passing my route to college. I found myself thoroughly intrigued by the long bearded men who would come out of the high floral grilled gate in flocks of white kurtas and shalwars rolled up.

A knack for photography has always had me attracted towards architecture that has history attached to it. One fine summer afternoon, following the hues of yellows with our cameras, we decided to visit the mosque for its well-known symmetrical domes and arches. A group of young adults comprising of eight boys and two girls, decently dressed to respect the sanctity of the place, entered Memon Mosque.

Our spirit of adventure and the thirst for discovery was at its peak, when suddenly we were interrupted by an elderly man, perhaps in his late fifties, speaking of religion as he owned it. The man approached me as I was the one moving ahead of my friends,

“Who let these girls inside?”

I was taken aback, shocked to my core.

“Why, yes, we were let in by the gates our male counterparts were let in from,” I replied.

“Bibi, you are not allowed in here. Can I talk to an elder male member who supervised you inside?”

Meanwhile my friends had paced towards the maulvi and a male friend interjected,

“Maulvi sahab, we are just students and here for a project. If there is a jamaat going on inside, we will leave. But we saw the masjid empty and thought there’s no harm in entering.”

The man who stopped me from proceeding towards the inside of the mosque was a caretaker of the vicinity, as we discovered. It was as shocking for him to see me enter a mosque, as shocking as it was for me being stopped from entering.

“You are not understanding, child,” he referred my friend, “women are not always in a condition to enter pure premises. It is a place for namaz, hence it requires purity.”

As much as it hurt for me to reply, I realised that I would have to speak up.

What offended me wasn’t only the use of a woman’s so-called ‘impurity’ as an excuse to dismiss their right as a Muslim, it’s how the same pious men seem to forget that women pray inside Masjid-e-Nabwi too. The ignorance of such men is astounding. It’s equally sad that women in Pakistan have no public space whatsoever, let alone congregational praying places where they are fully welcomed.

This is one of those times that I, as a feminist have imagined, coming face to face with. This is the moment when the power of a male religious man tries to suppress my rights as a woman, infantilise me, and yet I respond unharmed.

“Sure, maulvi sahib, we will go to the wudu khana (place to perform ablution) and perform our ablutions before we enter the prayer area. That would guarantee our purity in the eyes of God.”

All of a sudden his eyes had made me lose all respect for him and the place. With his look of disapproval, it was hard for me to distinguish between his lust for misogyny and the struggle he was undergoing for the belittling of women.

“It is useless to argue with girls like you. Please keep the girls from entering.”

He signalled the guards towards me and my female friend, meanwhile our male friends had wandered off inside the prayer area and these are some of the pictures they clicked, as part of our collection based on the heritage of Karachi.

My day ended in a confused state of being. I could question my male friends as to why they entered when the maulvi sahab had asked us to refrain from entering. I could question the maulvi, that just because I bleed seven days every month and bear excruciating pains, I wouldn’t be allowed in a sacred place of worship? I could ask God, why he gave men so much power so as to let them undermine women? I could ask myself, am I still the ‘other’ sex?

I could, but I can’t, because a girl with so many questions can only be an outcast in our public spaces.

The author is a Journalism student who loves taking pictures of unnoticed scenarios. She tweets as @manalkhan07 (twitter.com/manalkhan07)