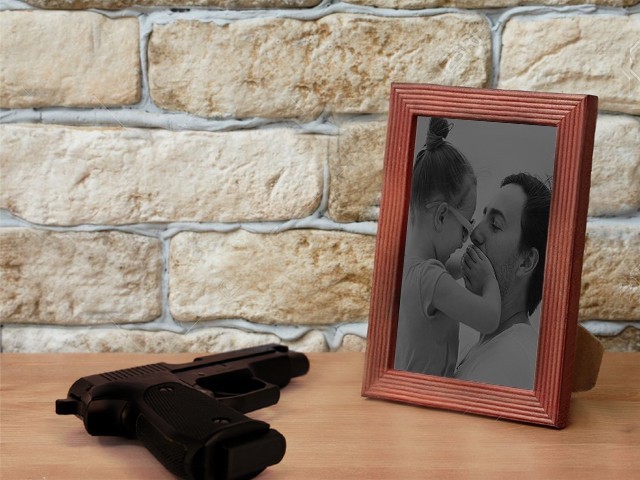 She asked Muneezah if the men of the force had brought anything else. She pointed to a gun that was on the table.

Muneezah gaped at him. Her brain tried to process this information. No words were spoken. Suddenly, her mother chuckled while eating her rice. The chuckle turned into high pitched laughter. Muneezah and her father stared at her while she guffawed for several minutes. Drawing a long breath, she said,

“Jaffer! You are not man enough to fight in a real army. Don’t you know that by now?”

Jaffer drew his chair back, threw the napkin on the table and stormed out. Muneezah started to say something but her mother cut her off,

“Shut up! Clean this all up before you sleep!”

It had been weeks since her husband had left.

Their neighbourhood was being patrolled by Palestinian soldiers constantly, who had made the area temporarily safe, but they were all to be shifted to an underground site to ensure safety. They had packed their belongings. Ammarah had tried talking to Muneezah, but her daughter had turned down all her attempts to make peace.

She couldn’t worry too much about that right now.

Her mind was occupied with thoughts of her husband.

She walked around the room in a state of anguish mingled with nostalgia. Her mind was in total chaos.

Was she frightened that he was going to die?

How could she be?

For years she had prayed for him to die in agony, every single day.

He was meant to protect them and he had stood hidden under the sink while those bastards defiled her mother. He had spent the rest of his life trying to repent that by supporting her but could that ever be enough? He had married her and moved to Gaza, set up a living there, provided her with every comfort, yet all she could see in him was cowardice; the spineless piece of s*** who let that happen to her mother that night and didn’t intervene to stop that horrifying obscenity from taking place.

But he had saved her.

Sometimes she liked him for that.

Sometimes she adored him for being a saviour and for being the reason she was alive.

Sometimes she was thankful to him for giving her Muneezah.

And sometimes she cursed him for getting her pregnant.

Of course she never said these things out loud. The only things she allowed herself to say were the ones that hurt him. That was all she knew now; how to inflict pain.

Why wouldn’t she? She had seen things that no one could survive.

After leaving the house that day, Jaffer had taken her by the hand and led her through the back of the Sabra campsite. The whole passageway was lined with corpses, limbs and other body parts. She kept praying she would not be witness to any belonging to her father or brothers.

The sound of a siren startled them, and Jaffer pulled her down behind the wall. She had crouched low only to find herself in front of a pile of bodies. That broken arm belonged to her brother. There was no mistaking that. She could have recognised that gemstone on his finger anywhere. Jaffer had pulled her away before she had time to even ponder over the limb.

But even though they had seen and experienced horrors, she never denied he had given her good times as well.

Lost in her bitter sweet thoughts, Ammarah didn’t hear the doorbell. She didn’t hear Muneezah loudly calling out to her. She was shaken out of her reverie when finally her own bedroom door was opened. Muneezah rushed in crying,

Ammarah heard this as if from a long distance.

She took Muneezah by the arm and began to head downstairs. She was reminded again of her terrible past; climbing down the stairs to see the horror that awaited her. She walked up straight to brown box in which they had brought her husband. She looked around the living room trying to figure out why the box was so small. Muneezah’s sobs filled the room as she dragged on behind her mother.

“Did you open it?” Ammarah asked, turning around to look at her.

Muneezah shook her head. They lifted the box and put it on the floor. It was larger than a jewelry box and smaller than a coffin but it was heavy nonetheless. Muneezah covered her eyes dreading the sight but Ammarah thought she had seen worse. She picked up the lid and peered inside. It was hard to believe a grown man’s body could fit into a box of that size. The element of surprise was the only emotion that she felt. Afraid that Muneezah might see it, she put the lid back quickly. She asked Muneezah if the men of the force had brought anything else. She pointed to a gun that was on the table.

Time dragged on as the mother and daughter sat together huddled in the room, the box and gun in front of them. Gunshot sounds, explosions and screams painted quite a clear picture of the street outside, so they stayed in. Just then, a loud engine noise purred up outside their door. Several male voices could be heard. Ammarah instructed Muneezah to go hide and stay out of sight. Muneezah protested a little but seeing the look on her mother’s face, she ran up to her room.

Ammarah put the box under the sink, while doing that she couldn’t help but chuckle; ironically, she had put her husband where he belonged.

She knew exactly what she was going to do. Ammarah hid behind the door. As soon as the men broke in, Ammarah attacked them with a bat. She knocked out two men before the rest managed to seize her and make her sit on all fours while they circled her and laughed mockingly.

“What a foxy old hag you are, woman! Let’s see what’s under that skirt!”

The words numbed her mind. She couldn’t hear anything but her own heartbeat and a woman’s screams as if from a distance. Just as the first man put his hands on her, several gunshots were fired and the men around collapsed one by one like ragged dolls. She kept staring at them in complete disarray. After several minutes, she turned to see Muneezah at the end of the stairs with a gun in her hand, breathing heavily.

Ammarah struggled to her feet and reached Muneezah, took the gun from her shaking hands and for the first time in years, hugged her. Wrapping her arms around her daughter, she kissed her. Every inch of her face frantically.

“You probably get this courage from your father.”

Keeping her precious daughter wrapped in her arms, Ammarah stood there and finally set the past free.