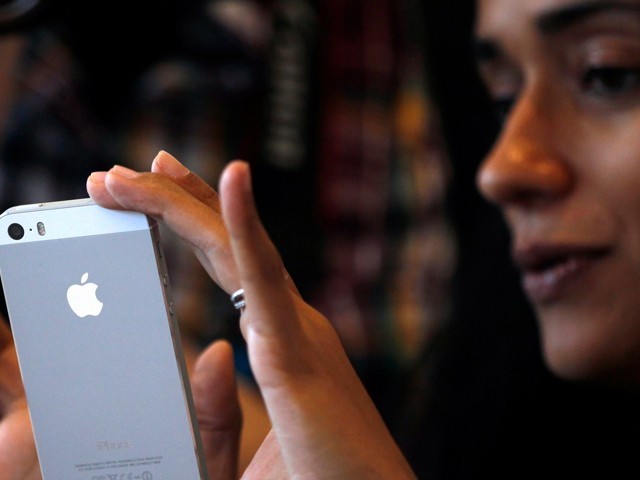 Once you click with someone, you can schedule a meeting and if the meeting goes well, then the rest they say is history. PHOTO: REUTERS

Growing up in a city as beautiful as Islamabad, can sometimes be a challenge. You run to the store to buy a bottle of milk, with your hair tied up in a bun, wearing flip flops and you bump into the cutest guy from your class. You get me? The struggle to find privacy is real.

Introduce the multi-million dollar dating app Tinder to this scenario and imagine the consequences. Here you were looking for the love of your life swiping away that you suddenly saw your Phupi ka beta! (Aunt’s son) Imagine the horror!

But what’s more horrific is when certain people feel entitled to harass others with the help of technology. A friend of mine who uses Tinder went through this recently. An acquaintance ran into her profile on Tinder, took a screenshot and posted it on her Facebook profile with the intention of embarrassing her publically.

Apparently she was being humorous.

Is it me or do we lack a sense of humour?

When I first heard of apps such as Tinder, I can’t deny that I felt disturbed, sceptical and judgmental. But soon, I found out that many of my single friends were using it. This was in a city in a faraway land.

A male friend told me that an acquaintance of his had used Tinder in Lahore and he scheduled a meeting with a girl, but the day before, his phone got stolen. Oh Lord! Why must fate bring such twists? But what struck me was what he said after this,

“Would you believe it? There were girls from STHS (a pseudonym I am using for some perceived elitist higher education institutes he named) on there. I mean imagine!”

At the moment I did not quite know how to respond. I was surprised. But later as I went home, I began to think why it was such a big deal for girls, from a certain privileged socio-economic class to use that app. The feminist in me had to once again wake up, he wasn’t surprised why his own male friend was commenting in such a way.

Of course! A man is usually in pursuit of a woman and a woman is a passive being who will either say yes or no. A yes if it’s a marriage proposal, a no if it’s an offer to get to know each other.

Anyway, before I deviate further, I want to bring you back to my original point. In essence, apps such as Tinder are not much different from the system of arranged marriages. If you disregard the hook up culture, which you should because we reside in the Islamic Republic of Pakistan, Tinder could be a great way to meet people with the intention of marrying them.

So you have the traditional matchmaker – usually a lady in her 50s – not necessarily qualified in human psychology, who assumes the moral obligation to tell women that they must reform their bodies and minds to be as beautiful and submissive as possible since larkay walay yehi chahtay hain (that’s what the man’s side demands).

When the man and his mom shortlist a few women, they go and visit their houses meet the woman and her parents. They are treated to amazing delights and some good tea and then head home. The second stage is to further shortlist the women to maybe maximum two, and let the man and woman meet each other. This can vary according to the views of each family, although families nowadays are open to the couple meeting alone in a public space. They can get to know each other in an environment that is not seething the pressure level that the Pakistani batting line up faces on the pitch in front of the Indian side.

If the meeting goes well and they hit it off well, then you know the rest. If it does not, then never mind, you can forget all about it, go back to your parents and start from the beginning.

You are exposed to a bunch of profiles in your geographical area of singles and you swipe right if you like someone, left if you don’t. You have a match when the other person has also swiped right. Now you can start messaging each other. Of course you can match with more than one person, and you can have multiple conversations. Once you click with someone, you can schedule a meeting and if the meeting goes well, then the rest they say is history.

The filters are pretty much the same; you can set an age range according to your preference, like the way you can tell the matchmaker that you don’t want a girl older than 25, because she cannot ‘mould’ into your lifestyle. You can set the geographical boundaries according to kilometres. Just imagine the comforts of technology. You no longer have to feel ashamed while informing the matchmaker that you do not want to marry in G sector or Rawalpindi and want to consider families who own a house in F sectors. The best part is that you have a bunch of pictures to help you decide before swiping right. If you’re conscious about their weight or height, you can text and ask, or just wait till the actual meeting.

So what’s the difference?

To some folks, the idea that a person is putting herself out there on a dating app sounds desperate. The girl must be fat, ugly, poor or ‘damaged’. The guy, well he’s just hormonal. Maybe they are oblivious to the number of phone calls that matchmakers get from the parents of single women, asking for suitable marriage proposals because their daughter is of age and there is a dearth of suitors. But if a girl swipes right to a guy’s face herself, she’s desperate of course. Why must she ever be an active agent in shaping her own destiny?

I came across a post discussing the issue of Tinder in Pakistan and after the first few comments; the discussion led to issues such as infidelity and adultery. There are a number of sleaze balls out there, but not everyone is looking for extra marital engagements.

Dating apps have undoubtedly taken different parts of the world by storm, particularly the global north. Renowned American comedian and actor Aziz Ansari talks about the advantages and disadvantages caused to the dating landscape by apps such as Tinder in his book Modern Romance. The data collected showed that many meetings did end up in hook ups, but large number of people did meet their future spouse online. According to the research he cites, majority of the couples in future are likely to meet online.

There has been considerable discussion in the west over the stigma surrounding online dating, emphasising that it has produced a generation of commitment-phobes. Since our social landscape is completely different, we could possibly view these apps in a different manner too.

It’s like ‘arranged’ marriage, only the role of the matchmaker is played by a lifeless phone that helps you download this app. What’s better? The phone will not tell you to compromise on the woman’s looks, or the man’s salary etc. You will decide everything yourself.