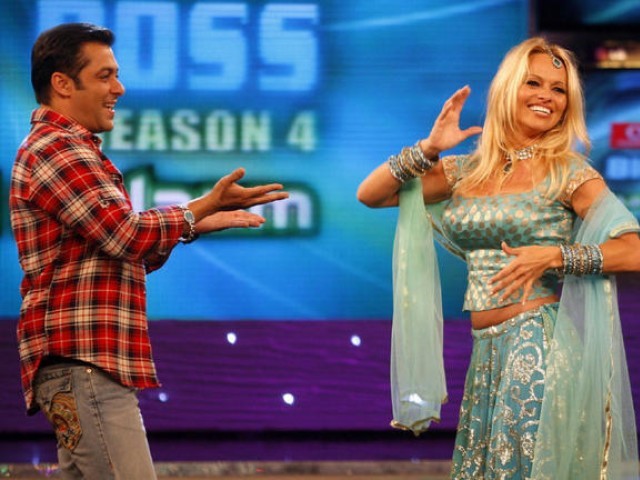 It started for me three weeks ago – while channel hopping looking for something entertaining to watch on television at home, I came across an Indian channel showing an intensely heated argument between some celebrities hailing from popular Star Plus soaps. Hoping for something interesting, I got comfortable on my couch and was drawn into the fourth season of Big Boss.

Whilst undoubtedly slapstick lowbrow entertainment, this show still tends to keep people glued to the screen as it unravels the domestic affairs, romantic flings, feuds and rivalries of the various housemates. It is a real-life soap opera, currently filled with a cast who have much experience of these.

Hollywood celeb and former Baywatch babe, Pamela Anderson, is also playing a guest role on the reality show, she has had to deal with all the other ‘inmates’! Her sultry Shakira-type ‘dhak dhak kare jiya’ dance only adds to the frustration of the ogling men- who have been constantly staring at her – in the house.

Sara Khan aka Sadhna from the Indian soap ‘Sapna Baabul Ka Bidaai’, Shweta Tiwari aka Prerna from ‘Kasauti Zindagi Ki’ and our very own Pakistani Veena Malik are the damsels in distress these days.

Due credit must be given to the ‘item’ giving distress signals – or should I say screaming signals! Enter the big bad wolf – a hefty and huffed up Dolly Bindra, who was keen to huff and puff these three little smug piggies all the way back home.

On several occasions in the reality show, Dolly Bindra – or ‘Dolly Bomb’ as she has been dubbed by her housemates – had behaved in a manner best described as un-ladylike, threatening her housemates by yelling out crude and vicious remarks. She accused Sara Khan of feeding her stale roti and serving substandard food even though Dolly herself was not serving eggs to her co-star Manoj for breakfast! Her presence and behavior became very much the focus. Even Big Boss host Salman Khan cracked a joke that he’d received a text from a man saying he was scared to enter his kitchen in case Dolly was there patrolling over the food!

It is human nature that if a person is rude to another, then that other would obviously become cautious around them. In this same way most of the housemates felt threatened with Dolly’s behaviour. She has also been referred to as the desi Jade Goody due to her sharp tongue! Dolly’s aggression only portrayed her inferiority complex to the co-stars as she has often become the third wheel.

However, perhaps we can learn something here too. Dolly was removed from the house, after she clashed with Samir Soni and they both indulged in some rule-breaking. She denied she had done anything wrong until presented with a series of clips, leaving her apparently stunned at her own words and actions – yet a few days later she was allowed to return to the house. This time, willing to offer apologies and a degree of humility. She has even been made captain of the house in a popular vote by the other housemates.

People who act as Dolly did initially are a spectacle.  They promote a rude and indecent society, destroy channels of communication with their behaviour and cause misunderstandings. While this sort of behaviour undoubtedly makes good – if cheap and undemanding – television it does not make good people. Hopefully, the newly repentant Dolly can demonstrate how showing others a degree of respect and courtesy can go a lot further.

A freelance journalist who has studied journalism from the University of Middlesex in England. She is currently working on the opinion pages of The Express Tribune.