The ugly truth about Muslims in New York 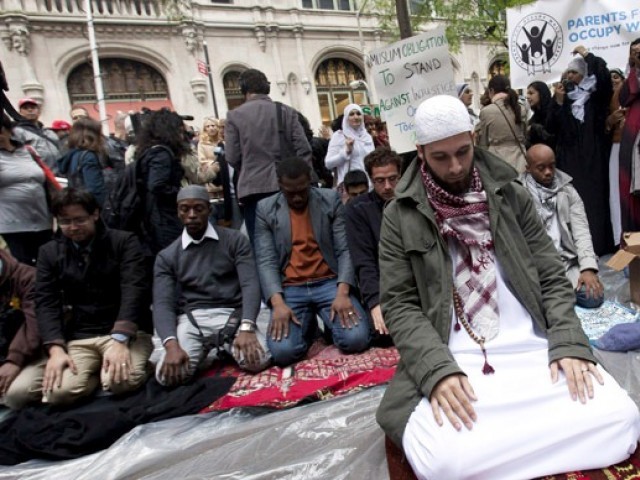 A group of Muslims in New York. PHOTO: REUTERS/Andrew Kelly

Recently, when I took the subway in New York my heart skipped a beat when I saw a poster that showed the Empire State Building on one side and on the other it said, in bold print,

“The ugly truth about Muslims”.

Below this, in fine print it continued,

My expression changed from shock to a wide smile. New York’s subway stations are flooded with “The Muslims Are Coming” advertisements designed to shock and thereby catch the attention of millions of commuters. Other posters indicate that Muslim-invented coffee, algebra and toothbrushes. One says Muslims invented the concept of a hospital and another goes on to say, in a humorous way, that Muslims invented Justin Timberlake. The advertisements are the creative effort of a group of American-Muslim comedians to fight the stereotype of Muslims as terrorists, illiterates, and people who have made no contribution to modern day science. I saw the docu-comedy film The Muslims Are Coming when it premiered in New York City in 2013. It showed a group of Muslim comedians performing stand-up comedy across the country, making jokes about Muslims. It was the first time many Americans had personally met a Muslim and it changed their perception of Muslims and Islam. Now the same group of performers are trying to fight the ever worsening rants about Muslims with hilarious ads designed to make average Americans think beyond ugly stereotypes.

Unfortunately, Islamophobia exists in the current political environment. Surveillance of Muslims, attacks on mosques, verbal and sometime physical abuse towards Muslims does happen. This bigotry is wide-spread in the United States. A popular liberal comedian, Bill Maher, has criticised Islam many times and criticised people who try to differentiate between Islam and ISIS. The likely-Republican nominee for president, Donald Trump, has used anti-Muslim rhetoric during his presidential candidacy rallies. Only a few years ago a series of anti-Islam advertisement were shown on public transport vehicles in major cities across the country.

Muslims are fighting this false perception of supporting terrorism at many levels. During the past week, a courageous young man shouted in a Trump rally,

“Not all Muslims are terrorists.”

He was removed from the rally. Since social media campaigns such as #notinmyname have gone viral after terrorist attacks, scholars like Reza Aslan and liberal advocates like Haroon Moghul answer tough questions on national television stations.

I am Muslim, and I stand against any crime/terrorist attack committed by extremists claiming to be Muslim #PrayforParis #notinmyname

This is not Islam and these attackers do not follow the beliefs of any religion. The ideology of terrorists is hate. #paris #notinmyname

On a different front, Islamic art and works showing the peaceful tradition of Sufism are being presented across the US. The Metropolitan Museum of Art has a wing dedicated to Islamic art and the Agha Khan Foundation has opened the first museum in North America to present the cultured image of Islam.

The Muslim presence in society is visible in major cities. A quick Google search yields the names of dozens of mosques and Islamic schools in New York City. Within a one-mile radius of my apartment in Brooklyn, there are at least five mosques, two Islamic schools and many halal grocery stores, supermarkets and restaurants. Thousands of people gather for Eid prayers in parks all across the country. Moreover, Eid is now an official holiday for Muslims living in the New York City Metropolitan area. In 2015, the city council of Hamtramck, part of the Detroit Metropolitan area, became the first majority Muslim city council in the US.

Large numbers of American Muslims are physicians, businessmen, lawyers, academics, and other professionals. They share the same values of family, education and dedication to hard work as other American families. Most Muslims are well integrated in society and have developed human connections that debunk the ugly myths about Islam. In the wake of the Paris and San Bernardino attacks, a few politicians and policy-makers want to tap into public fear and many right-wing media sources are adding fuel to the fire by using propaganda against Islam. This means that law-abiding Muslims living in the US have the responsibility to spread the peaceful narrative of Islam by their words and actions. If we fail to educate people around us about the ever peaceful Islam, these oblivious people will only have the negative and ugly information. The poster campaign in the New York City subway system is a clever and humorous way to create a more accurate understanding of Muslim beliefs and accomplishments.