What’s wrong with ajraks on a national symbol? 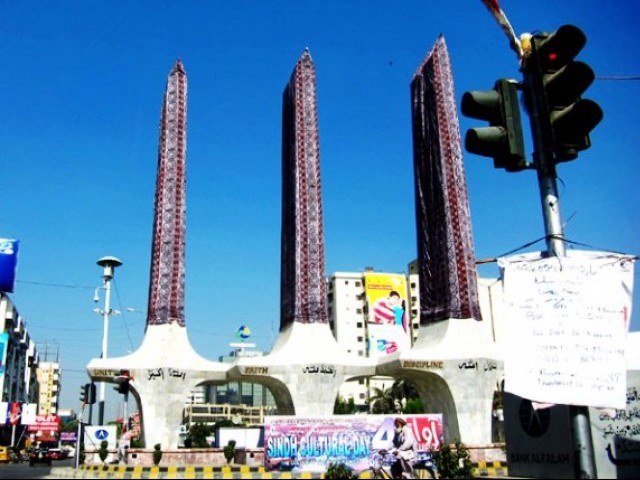 The Teen Talwar in Karachi get a touch of Sindhi flavour. PHOTO: Taimur Sikander/DAWN.COM

The reason is that Sindh celebrates its culture and ‘Ekta’ on December 4-5, respectively. Preparations to celebrate the cultural days are in full swing throughout Sindh as well as abroad where the Sindhi diaspora is living in scores.

It was last year, on December 6 to be specific, that Sindhis celebrated this day. Last year, it had a special focus on the Sindhi topi and was titled Sindhi Topi Day. This year December 4 and 5 were selected for the celebrations (due to the commencement of Muharram immediately after December 6) and were given the label of the Cultural and Ekta Day; there are plans underway to celebrate this day every year on a  national level. This year, even the Sindh government has made an announcement to celebrate the days officially and several programs have also been arranged in this view.

Sindhi channels have started dedicating hours of their transmissions to cover events being organised in line with these celebrations and making new songs praising the beauty of Sindh and its traditional symbols. Among these symbols are the ajrak, Sindhi language and the Indus River, also known as the Lion River. Small posters and gigantic billboards have been installed to commemorate the cultural days with great zeal – the Teen Talwar being draped in ajrak is part of the same.

Not everyone is happy

While the initiative has made many happy and instilled pride in their hearts, it has also been called “risky business” by some (take for example Mr Taimur Sikander) as though it could potentially threaten the stability of the country.

Which ‘ethnicity’ celebrates this day?

The day was celebrated with great fervour last year when millions of Sindhis clad in traditional Sindhi attire with ajraks and topis gathered at different platforms and took out mass rallies in Karachi. They danced to melodious tunes like “Jeay Sindh Jeay, Sindh wara jeayan! Sindhi topi, ajrak wara jeayan!”

There was no “risk”, nor did it anger any of the other ethnicities of the country. On the contrary, the respective leadership of some parties of these ethnicities, like Altaf Hussain of MQM and Shahi Syed of ANP, not only supported but actively participated in the celebrations and organised various Sindhi cultural programs from their party platforms. It goes without saying that the pro-establishment political parties had a grand show along with the nationalist parties of Sindh on the occasion. The same goes for this year, too.

Forgive my bias, but to me the write-up under discussion and those who support such views to be very biased. Everyone should celebrate the diversity of cultures that Pakistan hosts since they make strong, not endanger, the existence of the country. Let’s remind the critics that the very creation of Pakistan is based on many ethnicities which make the culture and traditions of the country. These four units when combined make Pakistan –otherwise, Pakistan in itself is nothing.

‘Dressing up a national monument’

When GM Syed first presented the Pakistan Resolution in the Sindh Assembly, it was not taken to represent just Sindhis; rather, it was considered the voice of the Muslims of the country and that of other assemblies, too. Pakistan has this label of being conceived in Sindh – why should it make anybody uncomfortable if the same Sindhi nation is out celebrating its culture, which is part of Pakistani culture.

If we take the Teen Talwar example (representing “Unity, Faith and Decipline”) and other “national” monuments existing in different provinces ununderstandably belonging strictly to the idea of Pakistan, it means they cannot even celebrate and speak about their cultures in their respective assembly buildings which also are the Provincial Assemblies of Pakistan. –This is ridiculous!

There is absolutely no harm in covering the Teen Talwar with ajraks, which is a representation of the centuries-old Indus Valley Civilisation, the land of present Sindh.  Also, ajraks are given to foreign delegates as well on their visit to Pakistan – there it represents the country.

Had he seen the Quaid-e-Azam’s approval of the centuries-old traditional symbol of his birth land (Sindh, that is) decorating embodiments of his pillars of strength for the nation, Minoo Mistry, the architect who designed the Teen Talwar, would surely have approved of the Talwar wearing ajraks.

A social development professional, journalist and freelance writer who studied English Literature and Linguistics. He is interested in Pakistan's socio-cultural and political issues and writes for GlobalVoices and his personal blog, møsaic, and tweets @aamirraz.

Pakistan should mind all of its languages!