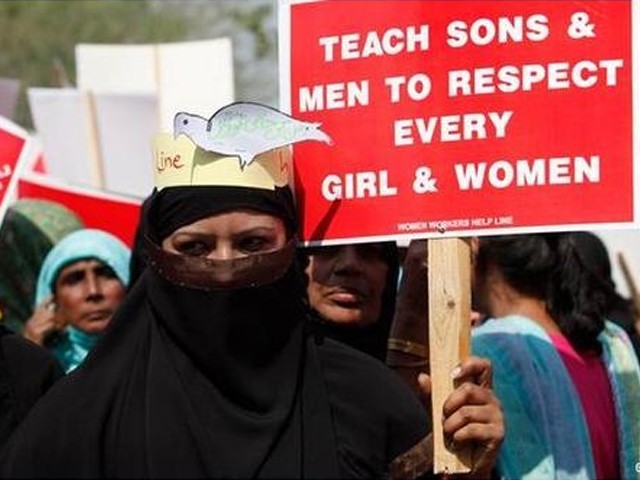 Activists in Lahore holding placards at a rally on International Women's Day. PHOTO:REUTERS

There was a time when women would hide their bruised faces with layers of foundation, fake a smile and accompany the husband to a family dinner 20 minutes after being beaten. They would weep in the bathroom when everyone, including the children, had gone to sleep. They thought they were being good wives, upright mothers and chaste women by letting the hurt fester.

And then, somehow, somewhere, things began to change.

Around 102-years after the first observance of International Women’s Day that took place on March 8 1914, Pakistan’s women are ruffling some feathers. A recent Facebook post of a young woman posting her own photographs of her battered and bruised body parts created ripples on social media, with her life story of an abusive marriage captioning the pictures. We do not know the reality of her story. All we know is that for whatever reason, a woman in Pakistan was able to do that.

Sehra Waheed’s book Silent Submission was a brave but harrowing autobiographical account of her own journey. We are living in times where we know the meaning of the terms domestic violence and abusive relationships.

Rights violations, abuse and domestic violence are back in the headlines. The Prime Minister of Pakistan, Nawaz Sharif, has reportedly vowed to change the law on honour killings after watching Sharmeen Obaid Chinoy’s Oscar winning film. Almost simultaneously, the Provincial Assembly unanimously passed the Punjab Protection of Women Against Violence Bill, a comprehensive and ground breaking initiative from the country’s largest province.

While domestic secrets may have started coming out and people may have started talking about it, is it time for Pakistan to congratulate each other on seeing a way forward regarding rights of women. The real question remains whether the situation on ground is improving?

In terms of legislation, it is encouraging if we consider how the Punjab Assembly unanimously approved the Protection of Women Against Violence Bill, calling for an end to all criminalities against women, such as, domestic violence, acid attacks, rape, psychological and economic abuse, stalking and cyber-crimes. The 31 clauses of the new bill have provisions for complaint registration and penalties for offenders. In addition, a toll-free helpline (UAN number) will be launched to receive direct complaints.

Our laws are all there, this one along with other ones. But will they be implemented?

A simple example is the Sindh Commission on domestic violence that was announced three years ago. If it came to pass, it would help gain justice for victims and survivors of domestic violence. But the red-tapism continues. The commission cannot be formed till the Rules of Business are approved by the chief minister. Once the CM approves them, the Commission can be formed by the Women Development Department. Sindh awaits that happening. This is just another example of how formation of laws and their implementation takes years. The political will still seems missing.

But let us be idealistic for a minute and assume that all laws come into action. The laws will be of no use if women do not step up and use the laws that are in their favour, but for that, a holistic change in attitude will be required. Men have to be brought on board and made to understand that the ideas of manliness they have been fed since childhood may, in fact, be symbols of weakness.

Laws may change, but nothing changes unless gender stereotypes are questioned and re-evaluated.

While these laws and the society’s willingness to talk about issues of abuse and violence against women are encouraging, the ground reality remains that women still feel it is okay to be beaten. Any new laws still make many of our men insecure – men who may sincerely aim to follow the tenets of Islam, but have somehow forgotten that they are the followers of a Prophet (PBUH) who never raised his voice at a woman, let alone raise his hand.

So where, then, does the change in our men begin? Perhaps with our women. Unless the mothers of Pakistan start teaching and conditioning their sons to respect women, real change remains farfetched.

We have zero tolerance policies against so many issues. The first such policy should be against abuse of women in any form. The change in attitude will be the real cause to celebrate. Till then, our celebrations remain incomplete.