Punching like a girl: Boxing no longer a sport just for men 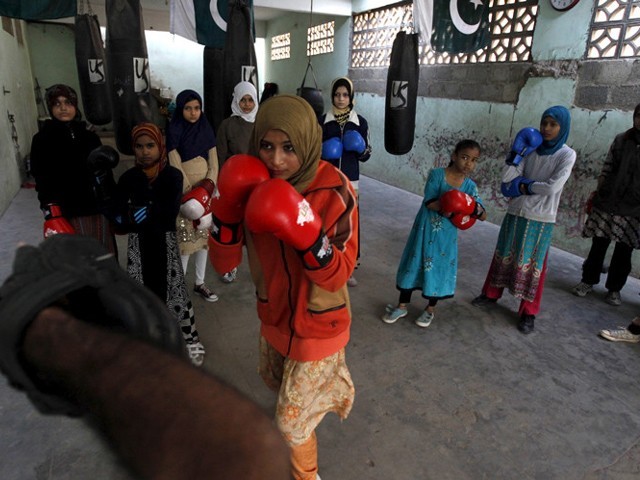 Seventeen-year-old boxer punches padding with her coach while others observe during an exercise session at the first women's boxing coaching camp in Karachi. PHOTO: REUTERS

Being a dedicated fan of the sport for years, the growth and development of boxing in Pakistan always brings me immense joy. So, when I woke up one morning and switched my laptop on for my daily dose of news, I was absolutely buzzed when I stumbled upon the headline,

‘Boxing is in our blood: Pakistani girls fighting for better life through sport.’

A boxing club in Lyari has now started girls-only classes and is competing in local tournaments!

Ever since female amateur boxing was included in the Olympics, women’s boxing has been in the spotlight. Nicola Adams from the United Kingdom and Katie Taylor from the Republic of Ireland became the faces of women’s boxing. However, for South Asian women the most influential figure that emerged was the Flyweight Bronze Medallist Mary Kom from India. It should come as no surprise that the three female boxers to compete from Pakistan in the recent South Asian Games cited Kom as their inspiration. Societal pressure is one of the most obvious challenge for Pakistani women that wish to partake in boxing, as fighting is traditionally reserved for men. What people need to understand is that participating in boxing doesn’t require competing in fights; there is the option of just going through circuits of hitting the bag along with other high intensity cardio workouts, which are a great way to stay in shape.

Then, there is sparring or boxing’s ‘net practice’, supervised by a coach. This is a core component in learning the sport and unlike competitions, participants are equipped with gloves and head gear with thicker padding than those that are worn in actual fights. In these setups, the emphasis is on learning rather than hurting the other person. However, this doesn’t change the fact that two women will indefinitely be punching each other in the face; you don’t ‘play’ boxing, but it certainly mitigates the damage and is a great way to get a glimpse into the feel of the competition.

As far as competing is concerned, amateur boxing (widely known as ‘helmet-boxing’ in Pakistan) is a different breed than its televised professional counterpart; points are given for landing a punch to the face and torso. So, the goal isn’t to land the hardest shot, but to make quick contact and get out of range from a counter. This is why, despite the smaller gloves and head gear, knockouts or even knockdowns aren’t as necessary. The fights are only three rounds, but if the boxer takes one hard shot at the opponent, the referee would step in and stop the fight from escalating due to safety and health reasons.

Boxing is typically a ‘poor man/woman’s’ sport. The one-on-one aspect, along with the nature of combat, attracts those that belong to the bottom rung of the socio-economic ladder in the hopes of changing their lives by literally fighting for a better future. I believe that no physical or emotional challenge that comes with boxing would be too big to surmount for Pakistani women who decide to take up the sport.

However, regardless of the talent and determination, the obstacle that could ‘knockout’ any boxer is funding. Amateur boxing requires government funding so fighters are able to travel the world, host tournaments regularly, get used to different styles and compete on an international platform. Our boxers simply don’t have the training facilities, coaching or the experience to be able to grab medals in top international tournaments. That is why Pakistan only has one Olympic medal for boxing: a Bronze in 1988 by Hussain Shah.

I always encourage people that are looking to get physically active to consider boxing for three reasons:

3.      Confidence and self-esteem from sparring/competing.

The aforementioned reasons along with my ‘western’ upbringing means cancels out any qualms I have about women entering the sport. Whether one wants to spar or compete, putting your body in harm’s way should be a personal decision. As far as going to the gym or taking part in all non-contact high intensity exercises is concerned, I think that is something everyone should get involved in.

I sincerely hope that this club in Lyari is only the beginning to a wide spread participation of women in boxing.

The author is a Canadian of Pakistani heritage with a keen interest in boxing.

A conversation with the Falcon and his coach, Jeff Mayweather

Will Amir “King” Khan be able to knock out Saul “Canelo” Alvarez?