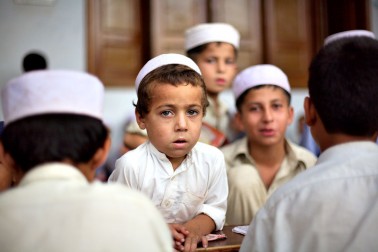 Literalists have always invented Islam depriving it of universalism

Recently released, the Brookings Institute report claims that the real cause of militancy in Pakistan is the public education system, and not religious schools (madrssas) because the majority of Pakistani students attend public school whereas only ten per cent attend madrassas. It states that Pakistani public schools disseminate militancy, hatred, jihad and distort history.

Until 1970, despite bureaucratic and military dictatorships, the Pakistani educational curriculum and textbooks, for example, had included the history of the Maurya and Gupta dynasties of the sub-continent conforming to the secular ideals of Pakistan clearly expressed by Mohammad Ali Jinnah in his speech to the constituent Assembly on 11th August 1947. Mohammad Ali Jinnah said:

“We are starting with the fundamental principle that we are all citizens and equal Citizens of one state … Now I think we should keep that in front of us as our ideal, and you will find that in the course of time Hindus would cease to be Hindus and Muslims would cease to be Muslims, not in the religious sense, because that is the personal faith of each individual but in the sense as citizens of the state. …You may belong to any caste or creed – that has nothing to do with the business of the state.”

Mohammad Ali Jinnah never used the term ‘Ideology of Pakistan’ during the struggle for independence nor after independence. Mohammad Ali Jinnah sternly scolded a prominent leader of Muslim League Raja Sahab Mahmudabad when he wrote to the historian Mohibul Hassan in 1939 that we want the dictatorship of Koranic laws. Sharifuddin Pirzada documented another failed attempt of an Abdul Hameed Kazi to propose a bill to create Pakistan as an Islamic state in All India Muslim League’s 1943 session.

In fact the term “Ideology” was first mentioned in 1962, fifteen years after independence, by a member of Jamat-e-Islami. In his monograph From Jinnah to Zia, Justice Munir writes:

The three rigid religious political parties Jamiat-i-Ulama-i-Hind, the Majlis-i-Ahrar and Jamat-e-Islami were opposed to Muslim league and the demand for an independent Pakistan. In Punjab Majlis-i-Ahrar exploited Islamic ideology to defeat Muslim League in pre-partition election of 1945 calling Muslim League leaders ‘Kafirs’ and opposing their demand for a separate state.

Ironically, the term “Ideology of Pakistan” was also first coined and used by Jamat-e-Islami who were against the creation of Pakistan and they did not participate with the Muslim League in the movement for the independence of Pakistan.

In late 1970’s, after the fall of East Pakistan, the Pakistani educational system began to implement the Islamisation project based on the literalist interpretation of Islam practiced by a very small percentage of the Muslim population. Jamat-e-Islami and other religious political parties championed the Islamisation project. This is a shameful testimonial to the twisted logic of the handful of Muslim literalists.

The unholy alliance of 1980s, between the dictatorial military regime of Pakistan under General Zia-ul-Haq, the unelected literalist religious political party Jamat-e-Islami and American government, cemented Islamisation of all Pakistani institutions including public educational institutions. The national education policy was Islamised in accordance with the narrow literal interpretation of Islam. The national educational curriculum was revised and textbooks were re-written to re-invent Pakistan as a purely religious society only for Muslim citizens.

Syed Abul A’la Maudoodi of Jama’at-e-Islami prescribed that all educational subjects should be taught from the perspective of the literal interpretation of Quran. Maudoodi did not accept the distinction between the religious and the non-religious worldly disciplines of education.

“In the teaching material, no concept of separation between the worldly and the religious be given; rather all the material be presented from the Islamic point of view.” (Curriculum Document, Primary Education, Class K-V, 1995, p. 41.)

The Sustainable Development Policy Institute found four major themes emerging strongly from their analysis of the curricula and textbooks of the three compulsory subjects:

“1. that Pakistan is for Muslims alone;

2. that Islamic teachings, including a compulsory reading and memorisation of Qur’an, are to be included in all the subjects, hence to be forcibly taught to all the students, whatever their faith;

3. that Ideology of Pakistan is to be internalized as faith, and that hate be created against  Hindus and India; and

4. students are to be urged to take the path of Jehad and Shahadat.”

Literalists have always invented Islam depriving it of universalism and divesting its teachings of its historic context. ‘Pakistan ideology’ is also a case of their figment of imagination that has no basis in Pakistani history.

Literalists themselves fail in avoiding contradictions in their own literal interpretation in their attitude and lifestyle. Zakir Naik, an Indian Muslim preacher of these parochial views of unequal human rights for men, women and for people of different faith has recently been restricted from giving a speech in UK and Canada but he is fighting against this verdict on the grounds of freedom of speech and equal human rights. They are not ready to allow equal human rights in their society while shamelessly demanding it from the secular societies.

These literalists simultaneously benefit from all the modern technologies, like getting photographed, using phones, watching television, flying in airplane, using western banking and so on; and criticise them all for being ‘non-Islamic’ and ‘secular’.

Literalists have a very small following because most people find it difficult to live in bad faith with a false consciousness, i.e. believing in one thing and doing its opposite. They have changed already, they should understand and accept it. The idea of a return is impossible; you cannot travel back in history.

Pakistani public education needs to focus on re-designing its curriculum, re-writing and reconstructing teaching material including textbooks and constructing a non-violent, democratic learning environment in the public schools to disseminate tolerant views and employment-oriented education.