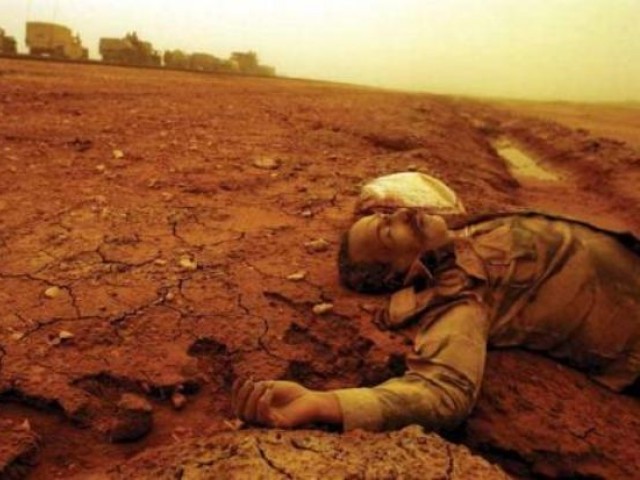 “To photograph people is to violate them…. Just as a camera is a sublimation of a gun, to photograph someone is a sublimated murder.” Photo: P. 97 “On the road to Baghdad, an American convoy passes an Iraqi killed in a fight with marines in March 2003.” The New York Times, March 19, 2008 ORIGINAL: U.S. marine vehicles drove past a dead Iraqi soldier killed in a firefight with U.S. marines early this morning after Iraqi troops laid an ambush for the marines as they headed north to Baghdad from a trench position in central Iraq north of the city of Nasiriya.

Forty years ago, Susan Sontag, in an essay for the New York Review of Books, wrote,

This and other essays backed her argument that photography was “essentially an act of non-intervention” that shared “complicity” in “another person’s pain or misfortune”.

“Did more to increase the public revulsion against the war than a hundred hours of televised barbarities”.

These essays formed On Photography, such nuance earned it the National Book Critics Circle Award in 1977, and it became one of the most important works of literary criticism on photography in the 20th century. The latest addition to this, in a book Noam Chomsky calls “Shattering,” is David Shields’ War Is Beautiful: The New York Times Pictorial Guide to the Glamour of Armed Conflict. To provoke, Shields provides 64 photos taken from The New York Times, 1997-2014, with a brief essay on how Shields dissected thousands of images from front pages. Shields writes:

“Over time I realised these photos glorified war through an unrelenting parade of beautiful images whose function is to sanctify the accompanying descriptions of battle, death, destruction, and displacement.”

“I found my original take corroborated: the governing ethos was unmistakably one that glamorised war and the sacrifices made in the service of war.”

Shields’ epiphanies lead him to accuse Judith Miller and the Times of,

“—intimate participation in the promotion of the war (that) led directly to immeasurable Iraqi death and destruction”.

Does Shields think substantive benefits would come from such a proclamation?

Shields and I have combated ideas for years, leading to the collaboration on a book and film I Think You’re Totally Wrong:  A Quarrel, as well as a curmudgeonly friendship. My understanding of his modus operandi leads me to suspect posturing and intentional irony in displaying the same photos that ‘glamorised’ war to enhance his art, the cover (reminiscent of Rothko) an example. Shields does not deny how photography has contributed to progress, from Mathew Brady’s Civil War black and whites, Walker Stevens’ pictures of the Depression era South, to the contributions of Robert Capa (who died after he stepped on a mine in Vietnam). His focus is only the Times.

A soldier’s camouflaged helmet peeks out of a field of pink and white poppies in Afghanistan, an Israeli tank enters Gaza underneath clouds and dust, a niqabi walks in the rust ochre air on a Baghdad street; a crushed piano sits amidst rubble in Saddam Hussein’s son’s palace.

The most beautiful photos, though, display humanity, Shavali refugees in the ruins of the Russian Embassy in Kabul, street girls in Islamabad, an Israeli woman holding a toddler in one arm and leading another through a blood splattered hallway, a Palestinian holding a dying child in Gaza, a marine doctor in Iraq cradling an infant in pink, and Ali Hadi, a professional body washer, preparing a corpse in Najaf, Iraq, as relatives of the deceased watch. Let’s take a look at the selected photos:

P. 52 “Dust Storm Shuts Down Baghdad: Most Baghdad streets were empty yesterday during a dust storm that many residents described as the worst they had seen in years.”
The New York Times, August 9, 2005
ORIGINAL: A sandstorm is filling the air over Baghdad with very fine powdery dust. A woman is crossing the street in Baghdad’s Karada neighborhood.

P. 55 “Shamali refugees have been living in the ruins of the Soviet Embassy in Kabul for several years.”
The New York Times, January 7, 2002
ORIGINAL: KABUL, Afg.—Jan. 6, 2002—AFGHAN-DESTRUCTION—The people of the Shamali Plain, which stretches north from Kabul to the mouth of the Pansjhir Valley, proudly resisted the Taliban for years, and they paid an extraordinarily high price. Some of the methodical savagery had an ethnic cast. Most of the Shamali people were Tajiks, who showed little inclination to be subjugated by the Pashtun Taliban. Today, their region shows little but destruction. Shamali refugees in the ruins of the
Soviet Embassy in Kabul last week, where they have been living for several years.

P. 77 “A Favorite Didn’t Win a Nobel: A chemical weapons watchdog won the Nobel Peace Prize on Friday, although one favorite had been a young Pakistani advocate for the education of girls like these near Islamabad.”
The New York Times, October 12, 2013
ORIGINAL: Girls attend lessons at a school in a slum on the outskirts of Islamabad October 11, 2013.

P. 82 “A woman and two children at the scene of an attack in Acre, Israel. Five Israelis, including a man and his daughter, were killed there yesterday.”
The New York Times, August 4, 2006
ORIGINAL: A woman walks with two children past blood on the floor at the scene of a rocket attack in the northern Israeli city of Acre August 3, 2006. Hizbollah guerrillas killed eight people in Israel in a rocket barrage on Thursday despite an intensive Israeli ground and air campaign to wipe them out, as world powers struggled to end the 23-day-old war.

P. 43 “At Least 10 Palestinians Die When Israelis Open Fire in Gaza: Israeli troops fired rockets yesterday during a protest march by Palestinians in Rafah, in southern Gaza, killing at least 10, including several children. A Palestinian man carries one of the dead children. The Gazans were protesting raids by Israeli troops seeking weapons.”
The New York Times, May 20, 2004
ORIGINAL: Palestinian man carries a dead boy killed when Israeli forces opened fire on a protest march at the Rafah refugee camp in southern Gaza Strip May 19, 2004. Israeli forces killed eight Palestinians in an attack on a crowd of people in Rafah, Palestinian witnesses and medics said.

They are definitely beautiful.

Do these images propagandise war or elicit revulsion? Does the photo of a one-armed woman bouncing a ball with her physical therapist at Walter Reed Medical Center lead “to immeasurable Iraqi death and destruction?” or to the question, “Was her sacrifice worthy?” In many cases, the verdicts embedded in Shields’ essay fail to complement the photos.

Shields, whose most profound line here is “war is a force that gives us meaning,” taken from Chris Hedges anti-war book, has judged before acknowledging paradox. What Bertolt Brecht wrote in 1931, “Photography, in the hands of the bourgeoisie, has become a terrible weapon against the truth,” contradicts how Don McCullin’s images of the Biafran War caught the attention of the French Red Cross and helped lead to the formation of Doctors Without Borders in 1971. John Berger and Roland Barthes questioned the ethics of photography, Diane Arbus may have exploited her subjects, but withheld judgment.

The relevance of beauty in Shields’ framework, also, betrays his argument. The clumsiness of four Sonderkommando photos does not take away from their spectral and accidental beauty, or the pathos. Should Gilles Peress or Allan Sekula or Sebastião Salgado have been better off using grainy blurred images? Visceral beauty promotes bellicosity as easily as it promotes pacifism.

But Shields will not budge as he asks “Who is culpable?” His answer a bromide, “We all are.” Sigh. Walter Benjamin wrote,

“There is no document of civilisation which is not at the same time a documentation of barbarism.”

What did Nick Ut do after taking his Pulitzer Prize winning photo?

He rushed Kim Phuc to the hospital. I’d wager that most New York Times photojournalists, with encouragement from their higher ups, would have done the same.

All photos are screenshots from the PDF of War is Beautiful.