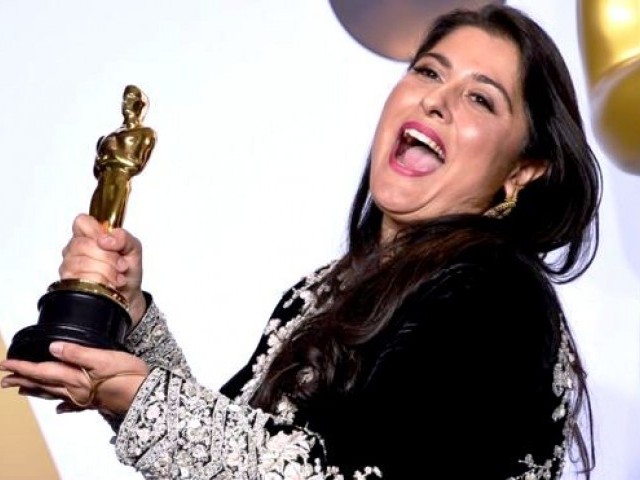 It was yet another proud moment for Pakistan when Sharmeen Obaid Chinoy held up her second Oscar for A Girl in the River: The Price of Forgiveness. To begin with, her being nominated for a second time was good enough, but winning a second Oscar came as a welcome surprise for me.

Unfortunately, most people don’t share the same sentiments as I do. Many are celebrating her success, but most are bashing her for portraying Pakistan in a negative light… yet again.

Are we enraged over the fact Sharmeen Obaid Chinoy projected the stark reality or are we upset we didn’t think about documenting such brutal issues before her?

#WeDisownSharmeen Her film is based upon d issue which happen once in a year,n reason behind it is illiteracy.. pic.twitter.com/yoUWBgbZEd

#WeDisownSharmeen
What has this opportunist ever done for Pakistan except pick or manufacture worms in it ? pic.twitter.com/RfnJzjoYag

#WeDisownSharmeen Edhi is not a Philanthropist worth enough to deserve an #Oscar but @sharmeenochinoy is. pic.twitter.com/cwzRWpm1nZ

At her session during the Karachi Literature Festival, when Sharmeen was asked a question pertaining to this topic, she responded saying,

“If you don’t like the picture, then fix the problem. Don’t shoot the messenger.”

She’s right. Rather than hating on her for doing something our government should have rightfully done, we should be grateful to her for bringing such issues into the limelight. At least she got the government to look into the Anti-Honour Killings Law. Pakistan will actually have a bill protecting women against honour killings and perpetrators of this crime will be punished. Should we be annoyed about this as well?

Somehow Pakistanis tend to get touchy when fingers are pointed at them. Our inflated pride and ego are pricked and that’s it, we run head on into a battle of putting down the person who paints the truth. Yes Pakistan is a great country in so many ways, it’s home at the end of the day, but to get frustrated and go on a hate rampage because people are trying to highlight and fix issues is not what we should resort to.

Are we content watching women get killed every day? I know I’m not. I support Sharmeen Obaid Chinoy for picking topics that strike a nerve. She makes us question our conscience, something which we have buried deep within ourselves.

We seem to have gone back to the but-why-couldn’t-she-have-portrayed-the-positive-side-of-Pakistan-instead rant without acknowledging the fact that the brutalities she documents are real. They exist whether we believe it or not and the only way to portray the good is to show that we acknowledge the bad and are trying to fix it. What positive side are they talking about, anyway? The Kasur scandal? Children in Thar dying of hunger? Forced child marriages? The issue of child labour? The oppression of women? Religious extremism? Mourning the death of a murderer?

I have always supported #PMLN but not any more .. #MumtazQadri #حب_رسول_پرجان_قربان

These are things that have happened in Pakistan, by Pakistanis! Yet, it is us Pakistanis who are in denial of them. Why? How? While it may be convenient for a large group of people to ignore these horrors, I am glad that there is someone willing to protest against them. To call us out on our ignorance and asinine attitude towards it. If there is a problem, hate it, fix it, talk about it, make laws to correct it, but just please don’t ignore it! Don’t be in denial of it.

In her speech at the Oscar’s she said,

“This is what happens when determined women get together. This week the Pakistani Prime Minister has said that he will change the law on honour killing after watching this film. That is the power of film.”

We should support our people in whatever positive efforts they put in improving Pakistan. Our country is blessed with amazingly talented people, all we need to do is appreciate and acknowledge them for their wonderful achievements.