Aligarh: Gay love in the time of Bollywood 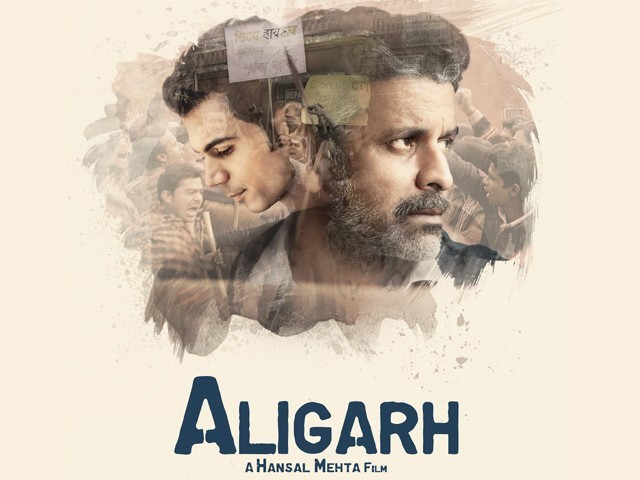 In Bollywood, where homosexuality is an object of mockery or contemptuous gags and caricature, Manoj Bajpayee champions LGBT community’s cause without resorting to melodrama and in the process along with the movie itself, manages to reinforce the fact that everyone is entitled to their own sexual preference.

All right, I am holding my hands up and I admit I was a homophobe back in the day. Like any typical Pakistani youngster, a lot of my cussing and swearing involved slurs against the gay community. Even the word ‘gay’ itself turns pejorative since it’s used with a derisive attitude in our society and considered as a general term of disparagement amongst Pakistani youth and ashamedly, I was no different.

But for me personally, my days as a typical homophobic youngster changed for good when I happened to stumble upon Brokeback Mountain (2005). I am not a big fan of movies belonging to the genre of romance but director Ang Lee’s love-drama centred around a secretive relationship between two cowboys just radically shook my beliefs regarding an individual’s sexual orientation.

Brokeback Mountain was numbing, but not like when you watch a typical Bollywood eyesore. Au contraire, it was thought-provoking to such an extent that it haunted me into researching extensively about this whole phenomenon that is homosexuality.

Jake Gyllenhaal and Heath Ledger combining together in a taboo relation was one of the most fascinating emotional rides I had while absorbing a film and I experienced a cinematic déjà-vu recently, while watching another pair in a movie based on homosexuality.

Which brings me to Aligarh, in which Manoj Bajpayee, playing the real life Dr Shrinivas Ramachandra Siras, a reluctant poster boy for India’s LGBT rights movement who was hounded out from the titular university for being a homosexual, shares a similar rapport with Rajkummar Rao who plays a young, fire-in-the-belly journalist, Deepu Sebastian.

The couple, although not involved in the same sort of relationship dynamics as Gyllenhaal and Ledger, managed to evoke a similar visceral reaction out of me as the Brokeback Mountain duo; that of mind provocation, if you were not following. 2016 has been a year of biopics for the Indian cinema so far, with Airlift, Neerja and now Aligarh hitting the theatres with aplomb. The film revolves around Bajpayee who, with method acting at its peak, is a mild-mannered professor of linguistics at the Aligarh University and a homosexual sexagenarian. Spending his solitude listening to old melodies of Lata Mangeshkar and sipping whiskey, Dr Siras’s life is turned upside down when his privacy is invaded in a sting operation where he is filmed in bed with a rickshaw driver.

What follows is a hideously concerted campaign by the university authorities to oust the professor and break his spirit for his sexual preference.

Enter Deepu, the idealistic rookie journalist who helps Siras fight the battle to have his job, home and dignity restored. Long story short, Aligarh is Siras’s and Deepu’s poignant journey.

Forget Sardar Khan from Gangs of Wasseypur (2012) and Bhikhu Mhtare Satya (1998), Siras is by far Bajpayee’s best work. An enthralling performance with a compendium of raw emotions mainly love, warmth and agony showcased so profoundly that  it is hard to look away from him.

He is crown jewel of the melancholic splendour that is Aligarh. What Bajpayee does in this film is so reluctantly courageous, so honest and so transcendental that his Siras is on way to becoming a point of reference not just for us but for generations to come. In Bollywood, where homosexuality is an object of mockery or contemptuous gags and caricature, Manoj Bajpayee champions LGBT community’s cause without resorting to melodrama and in the process along with the movie itself, manages to reinforce the fact that everyone is entitled to their own sexual preference.

Aligarh is not just a powerful character study; it is also a razor-sharp social commentary, sensitively making use of a real life tragedy.

Also the self-appointed generals of the moral brigade need not worry, since the film does not ‘promote’ homosexuality per se. If anything Aligarh is about human rights, right to privacy and equality for all. Goes without saying, that includes gays as well. One wishes that it has the same kind of influence on the public of the sub-continent as Brokeback Mountain and Philadelphia (1993) had with the western world with regards to understanding homosexuals’ plight. Aligarh might never achieve worldwide recognition as the aforementioned two but it surely is one of the most profound films ever to grace cinemas in our part of the world. (The poetry is in the silences between words; its connotation depends on the age and circumstances one is in.)

Aligarh is the poetry that got created owing to the neglected silent predicament of the LGBT community, and it’s high time that we all act the proper age to empathise with them.