America must decide between its people and guns 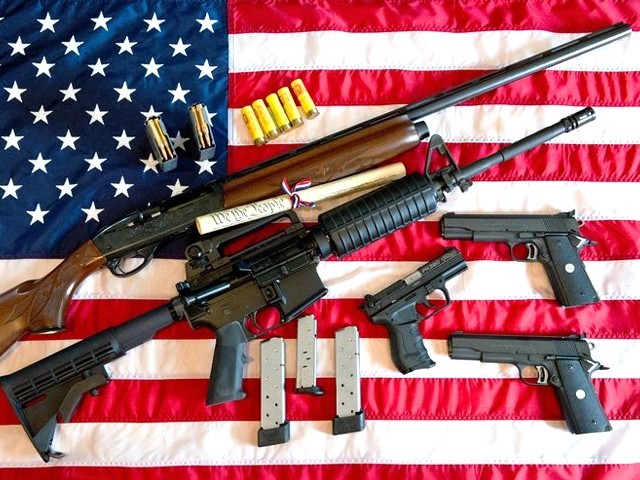 US politics has taken a nose dive. In the run up to the November 2016 presidential election, public opinion is going crazy. At a time when Donald Trump, Marco Rubio and Ted Cruz and are hell bent on safeguarding the dreadfully outdated Second Amendment to the US Constitution, we, as a society, are seemingly settled and resigned to our fate.

Beyond the 400 or so mass-shootings and over 2000 deaths and injuries just in 2015, the guns are still blazing and there’s no stopping the lunacy. Proponents of the dastardly arms trade say that guns only kill innocent people when they fall into the wrong hands. They also attribute mental illness as a reason for the rampant killing sprees. Proposals for deeper background checks are booed at when the government wants to make a move in the right direction.

All this is contributing toward undermining the image of the United States. When murderous acts are carried out on the streets, in schools, places of worship, family planning institutions and centres for the developmentally challenged; when educational institutions let students carry guns in classrooms and when laws of the country are slack enough to allow domestic terrorists fill up their homes with ammunition enough to kill large chunks of population, where do we stand as a nation? Shouldn’t we wake up to the reality and move on with the gun control measures? Obviously National Rifle Association (NRA) has its own axe to grind, helped by the far-right, blood thirsty Beltway leeches that would gun down even the vaguest effort to curb the supply and trade of arms.

It’s not just the politicians though. It’s the public at large in various parts of the country that is used to bearing arms and traditionally thinking that carrying guns would make them safe. The founding fathers enacted the right to bear arms into the constitution in the late 1700s to enable people to join the newly-independent nation’s army, suppress slave revolts and repel invasions. None of this holds true in today’s United States. We are not in a state of internal conflict and slavery was abolished about 150 years ago. The Second Amendment is completely obsolete.

Speaking of obsolete, our Republican friends on the campaign trail keep protesting that ‘Barack Obama is undertaking a systematic effort to change this country, to make America more like the rest of the world’ ‘What’s wrong with that?’ I ask. Is Obama committing a daylight murder if he’s trying to introduce some 21st century reforms in the society? Why build walls of resistance when it comes to gun control measures?

Constant massacres from Michigan to Kansas to San Bernardino have dragged our emotions to the lowest ebb. The irony is that politicians all over the presidential campaign landscape are desperate to score points and competing with each other to cosy in with the gun lobbyists and those afraid of a slave revolt.

This is the ‘Bible Belt’ population that suffers from economic problems and not educated much – folks who Donald Trump fondly refers to as the ‘poorly educated.’ Soundbytes favouring Second Amendment are belligerent and anyone opposing guns is either told to shut up or simply leave the country since such voices are considered unpatriotic.

They say, ‘don’t talk about it, be about it’. Americans must move past the hallucination that more guns make them safe. If restrictions on supply and sale of weapons are imposed and stricter checks are performed, fewer people will have access to arms and, therefore, there’ll be fewer killings.

We are continuously bombarded by the scare tactics of the likes of the Republicans and the right-wing media. We must not let our destiny be commandeered by the gun lobby that serves parochial interests. The ease of access to weapons is letting every lunatic use their Second Amendment ‘right’, shoot and kill. In a country where many believe that access to health care is not a basic human right, death by hostility is the answer to our health woes since a bullet costs far less than a visit to a doctor’s office.

There are no easy solutions. As desperation in the society grows, as patience and perseverance in life turn into unknown commodities, we are walking on thin ice on this issue. How many women, kids, office workers, bystanders and ordinary souls must sacrifice their lives before anything constructive can be done to curb this menace? While undoubtedly the constitution reigns supreme in the US, at times people feel that the Second Amendment, by virtue of its non-stop mention, is the constitution – a general perception that we get on account of the phenomenal importance attached to guns.

America is still an incredible country and, just like any other nation, is characterised by innumerable flaws and follies. Mental illness is a huge issue and lack of care is an ever-increasing problem that increases the risk factors. If someone is unhappy with the Planned Parenthood concept, they go and kill people in one of their facilities Colorado.

Influenced by ISIS and think America is the ‘great satan’? Buy weapons in bulk online and receive them at your doorstep.

The bottom-line is that anyone and everyone can get weapons from the most basic handgun to even the latest and the greatest rocket launchers.

As a proud American I feel appalled by the attitude of the powers that be, refusing and turning a blind eye to the chronic gun-crisis. Listening to the presidential debates, one experiences a complete failure to address the burning issues of the day. The clowns on the stage keep harping on the same old tune that they’ll protect the Second Amendment with their lives. I think they need psychiatric treatment themselves. Also, such fluff is super interesting for entertainment purposes but adds nothing new to the conversation.

Obstructionism doesn’t ever help. What may help is getting to the root of matter, i.e. work with the interest groups, curtail the monstrous, incessant supply of weapons to the market and incentivise states all over the country to work on mental illness related issues. Talk to the blue-collar and poorly educated that guns don’t help. Several luminaries and celebrities are already working against guns. Former New York City mayor Michael Bloomberg is at the forefront of this campaign and an active gun control supporter. There’s no reason to reinvent the playbook. We just need more of such people and less of the right-wing zealots.

Despite all its imperfections, America must live long and prosper. For many, it is much more than a country – this is our home. This is the time to act and eliminate gun violence. If not now, I’m afraid, it’ll be never.