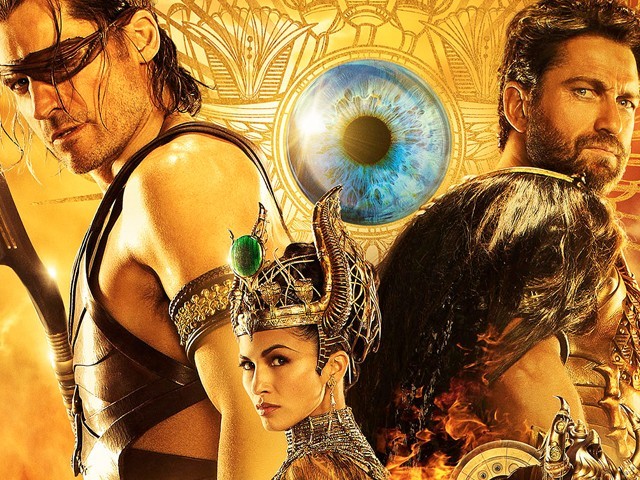 The film is set ancient Egypt and shows gods living among the mortals. The gods look just like the humans, only they’re much taller.

Trailers do not do a good enough job of selling  movies properly these days. Most of the time the entire film is ruined for us in a space of three minutes, while in other cases, they try to mask their film’s mediocrity by showcasing a handful of good moments in the trailer. This is done in order to save the remaining mediocre movie for suckers who pay to watch it.

In the case of Gods of Egypt, at least the trailer sold the movie for what it is; a big-budget, whitewashed misappropriation of Egyptian culture and mythology with lots and lots of Computer Generated Imagery (CGI).

The film is set in ancient Egypt and shows gods living among the mortals. The gods look just like the humans, only they’re much taller. A voiceover at the start of the film tells us that god Osiris has decided to crown his son, Horus (Nikolaj Coster-Waldau) the king, until suddenly, Osiris’s brother Set, also known as the god of darkness and played by Gerard Butler suddenly thinks he should be the king. Thus Set stabs his father  to death and pulls out Horus’s eyeballs (yup, they took that straight out of The Lion King(1994), except the eye-balls part) and starts babbling some made up mumbo-jumbo about the afterlife to his soon-to-be mortal slaves. The main hero of the story however, is Bek (Brenton Thwaites), a lowly mortal and thief who can best be described as a 99 cent version of Aladdin. Bek infiltrates Set’s treasure vault, gets his hands on Horus’s magic eyeballs, among other things and attempts to return them to the wounded Horus so he can fight back and retake the throne.

In case you haven’t figured it out yet, Gods of Egypt is really, really bad. It’s badly made, it’s badly acted, and it has really bad special effects. It’s a movie that fails on nearly every level. It’s quite obvious that nearly the entire $140 million budget was spent on special effects. And boy, do they feel horrendously artificial. I had trouble believing a single shot in this movie. That’s how overdone the CGI is. In some shots the actors aren’t even fully integrated into the background. Watching this movie is like watching someone playing a really terrible video-game.

The execution is drab, the action sequences are bloated and incredibly dull, lacking any imagination whatsoever and often bordering on silliness.

The film is directed by Alex Proyas, a director who made two extremely interesting films – The Crow (1994) and Dark City (1998) – at the start of his career before making a mediocre film I, Robot (2004) followed by an awful film, Knowing (2009). With Gods of Egypt, he has truly sunk to the bottom of the barrel in regards to his cinematic career. I actually think the studio could have saved themselves some money by getting the visual effects department to direct the movie instead. They could have directed it just as well.

The lazy writing consistently delves into the ‘so bad it’s hilarious’ category with its awkward humour and clunky dialogue. If the movie was just two hours of stupid camp, I actually could have appreciated it a little bit, but then the movie tries to establish some serious drama and it just does not work. The acting is mostly serviceable. There’s something to enjoy about Gerrard Butler’s crazy and over the top turn as Set. At times it’s unclear if he slips into his Scottish accent by accident or is just too lethargic in order to put in an effort to cover it up. Nikolaj Coster-Waldau tries his best with what he’s doing, while Brandon Thwaites comes across as too bland a character. Gods of Egypt is an empty CGI spectacle at its very worst. It’s silly, it’s senseless and it’s boring. It actually feels like the filmmakers set out to make a video-game but ended up with this joke of a movie.