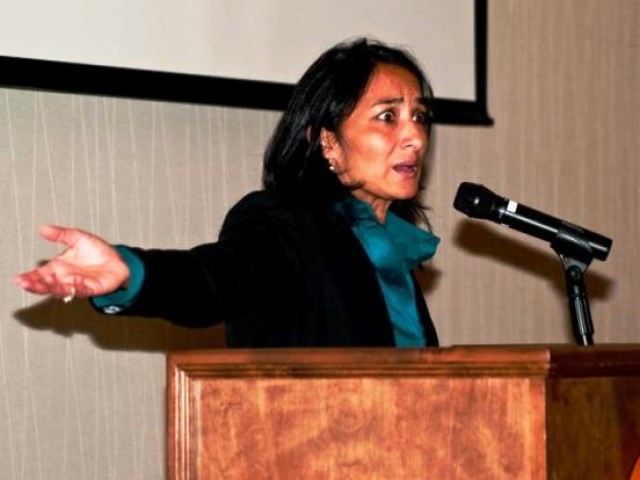 "Profile my family. Profile my father because the threat is inside the Muslim community."

It is commonly understood that mainstream media creates, processes and disseminates information which determine our beliefs and attitudes and, ultimately, our behaviour.  Consistently displayed messages create a false sense of reality and produce a consciousness that cannot comprehend or even worst, willfully rejects the actual conditions of everyday life.

Many have argued that these manipulative messages become the ‘instrument of conquest’, by which the ruling elite tries to make the masses conform to their objectives. By using ‘talking heads’ that explain, justify, and sometimes even glamorise the prevailing conditions of existence, mainstream media secures popular support for a social order that is not in the majority’s long-term interest. In the cacophony, which is often masked as intelligent debate, what remain unconsidered are the alternative social arrangements.

Last week a debate aired on Bloomberg’s Intelligence Squared program achieved exactly what the proverbial media managers would have wanted. The petition “US airports should use racial and religious profiling” which was debated in the world’s leading cosmopolitan, defiantly the most diverse city, New York, resulted in a majority favouring profiling. What surprised me more than the result was the panel.

Among others, Asra Nomani, a Muslim American woman for whom I have tremendous respect (read my article My Daughter’s Azan) was for the motion while Michael Chertoff, a Bush administration neo-con who will be remembered for his failure in New Orleans, was against the motion.

The motion sought profiling of Muslim men between the ages of 15 to 30 “from a handful of countries and ethnicities.” The premise was that all Muslims are not terrorists but all terrorists seem to be Muslim.

Asra Nomani told the audience of the show who later favoured profiling:

Her statement reminded me of a famous Gore Vidal quote:

“Persuading people to vote against their own best interests has been the awesome genius of the American political elite.”

I agree with Nomani that an extremist interpretation of Islam seems to be gaining currency around the world and we ought to be more vigilant ( read my article on Shahzad Faisal’s crazy attempt), but she does not speak for me when she invites profiling of my sons and nephews – and millions of Muslim American.

Her position is flawed at many different levels.

How do you determine who is Muslim?

I am assuming by name. Let me give you six names (Rashid, Khalid, Ibrahim, Shams, Faisal and Ahmar). Please tell me which one of this person is a Muslim, an atheist, a Christian, an agnostic and a Buddhist? Will you be surprised if I told you that all of these five ideological strains are represented in these six names? What if I said four out of these six are siblings?

This is absolutely real. How else will you determine our religion? Look at our genitals? All six of us are circumcised – not much of a differentiator there. And, how do you know that someone by the name Jose Padila is a Muslim? How about a blue-eyed, blonde hair Caucasian man name Joseph McNary. Do you know he is a Muslim?

Here’s another personal anecdote – I was married to an Indian-American woman for 18 years; she was not a religious person but she was born in a Hindu household. We have raised four kids with an understanding that we will not choose or impose any ideological inclinations on our kids.

Not long ago a Pakistan-American journalist invited us to a Thanksgiving dinner in Long Island. Our kids were playing around and my son had an accident. We had to rush him to a nearby hospital. At the emergency room triage we provided our insurance details and one question on the form asked for my son’s religion – I wrote “TBD.” The administrator at the triage was confused and asked what religion TBD is. I told him I don’t know what my son’s religion will be or if he will actually have one and therefore I have written, “to be determined.”

But if we are to follow Nomani’s recommendation, my son should be profiled because I gave him a name that is predominantly a Muslim name.

And, you can’t just asks Muslims to carry an identity card without asking Jews, Christians, Hindus, Buddhists and everyone else to carry a card identifying their religion. What would that do to America’s constitution? Would we continue to be a secular state or become more like Pakistan where you have to state your religion on government issued identification? That would really suck for me because I had traded in a much better quality of life in Pakistan for civil liberties and intellectual freedom in the US. It seems intolerance has followed me here.

If my son who is stuck with a Muslim name were profiled at the airport, why would he not be profiled when he goes to a job interview? How do I know he is not profiled at the college campus? I know many young Muslim men will feel more and more alienated – will rapidly lose self-esteem and may even take a dive for the worst. How do we know that we will not push many towards extremism by profiling?

Profiling is unjust, illegal, counter-productive and has never worked.

Analysts like Asra Nomani, who have done good work to promote Islamic feminism, demonstrate a deep, instinctive aversion to engaging in any fundamental critique of social and cultural experiences. Talking heads like her do not even attempt to engage in an analysis of the underlying political reality and cultural structures – a conceptual blindness epitomised by superficial empiricism. They have confined themselves to the appearance of “threat”, never attempting to analyse the relationships latent in the “threat” of “profiling.”

A Pakistani-American writer, technologist, and social entrepreneur. Malick graduated from New School for Social Research with a masters degree in anthropology. He holds several technology and management certifications.

Solution is internal: Stop blaming the US

Nicaragua to Pakistan: A model for revolution