Today, India is not what it was before he won the elections 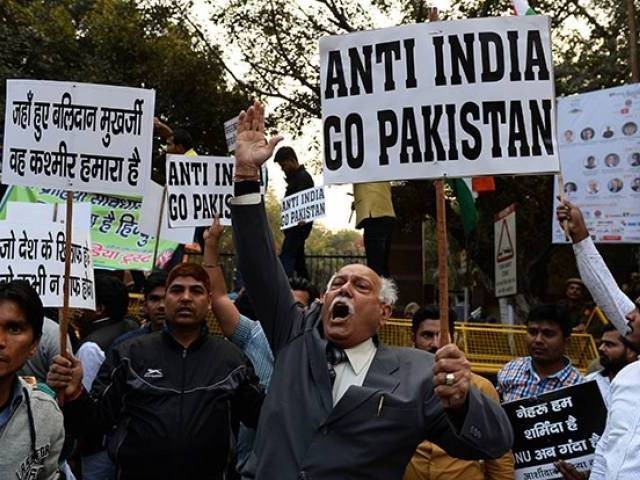 The arrest raised fears over freedom of speech in the country's top universities. PHOTO: AFP

Is India paying the price for electing Narendra Modi as its prime minister? I ask this question regularly because since Modi assumed office in Delhi, the Bharatiya Janata Party (BJP) has been hurtling the country from one controversy to another.

An atmosphere of fear has been created where any opposition to majoritarian politics is termed anti-national and the questioning of the government’s divisive agenda invites counter protests and blame for vitiating the atmosphere of the country. The state, therefore, has created enemies out of its own citizens by labelling them liberals, seculars, freethinkers and religious minority.

The current controversy involving New Delhi based Jawaharlal Nehru University (JNU) is an extension of the majoritarian narrative that started with the arrival of Modi. The campus debate on capital punishment and politics in Kashmir has been blown out of proportion and students have been arrested on charges of sedition. This is an unprecedented situation, where the country is witnessing an undeclared state of emergency and any voice of dissent and non-conformism is being termed as seditious.

The JNU is a popular university in India which excels not only in academics but also in politics; a place where students – regardless of their ideological beliefs – are made politically aware of the issues affecting the world.

For the first time, we have a situation where a xenophobic mob that holds loyalty with the right-wing government is being imposed on those who question the ruling dispensation. No one is safe, be it the students, academicians or journalists – they are all on the hit-list of the lynch mob, because they don’t subscribe to how Hindu radicals perceive nationalism.

The BJP and Rashtriya Swayamsevak Sangh (RSS) have always struggled to find their mark in this kind of liberal space. Their rigid worldview does not find resonance among people who counter their ideological agenda. In order to establish its hegemony in the university campus, the BJP is trying to use the might of the state machinery to control the bastion of liberal education.

To legitimise their action, the ruling party is blaming the students for shouting anti-India slogans in the name of observing the death anniversary of Afzal Guru, a Kashmiri, who was hanged in 2013 for his complicity in the attack on the Indian parliament in 2001. It’s very common for students to debate over the issue of Kashmir and capital punishment. The student wing of the BJP, Akhil Bharatiya Vidyarthi Parishad (ABVP) acted as an agent provocateur leading to the president of the JNU students’ union, Kanhaiya Kumar, being arrested on charges of sedition along with two students who have been detained on the same charges.

The JNU campus has debated over the issues of Guru, capital punishment and the Kashmir dispute for many years, but why has it become ‘seditious’ this time?

Why did the state intervene in such a heavy handed manner? Why should the Indian government monitor debates at universities?

It is bizarre to accuse students of being anti-nationals.

This is not only an attack on the campus, but an extremely planned intrusion into the democratic space of India. This is a collaborated attempt to impose a narrow sectarian worldview on the campus which prides itself on its diversity.

Pakistan knows the baneful impact of ultra-nationalism and jingoism; it stifles democracy and the citizens gradually lose their basic fundamental rights. India today faces the same challenge. The country is completely polarised on the issue of nationalism.

Modi, as a prime minister, is a mute spectator of what’s happening under his very nose. Those who understand politics know that the prime minister is not helpless, but acting on a design of polarisation and is imposing a predominant Hindu majoritarian narrative on the nation.

Right from the beginning of his term, the government has been in a very confrontational mood. It banned a large majority of NGOs and their activities as a means of ‘protecting national interest’. Divisive issues like the beef ban and love jihad were brought to the forefront. When intellectuals and artists came forward to confront the country for rising intolerance, the ruling dispensation unleashed its own supporters on the liberals. In other words, anyone bringing up the issue of intolerance was maligned and hounded. An ecosystem of fear has been created and Modi has allowed his workers to spread this form of terrorism.

With that said, Modi keeps launching ‘Make in India,’ ‘Digital India’ and other programmes to portray his image as a concerned PM in terms of his country’s development, yet he deliberately remains silent on the divisive issues that are agitating the nation; just like he did during the Gujarat Riots. He blames the opposition for this mess, claiming that it’s a conspiracy to destabilise his government.

The annual reports from Amnesty International have pinpointed India for its failure to protect religious minorities and fanning sectarian conflicts. The first two years are generally the honeymoon period for any new government, but BJP has proven to be a nightmare for the masses in just 20 months.

In May 2014, Modi came with a promise of ushering in a new era of economic liberalisation and leading the country on the path of development. Despite the scepticism due to his past, many still trusted his words, thus voted for him. Today, India is not what it was before he won the elections. The promised economic turnaround is still in process. On the contrary, the economy is struggling. Therefore, the BJP is resorting to the politics of polarisation to hide its own failure on the economic front.

The political space of dissent has shrunk; democracy is under deep onslaught by right-wing Hindu groups. Moreover, India is moving towards mobocracy in the name of nationalism. The country is being assaulted on its democratic aspirations, attacked on its liberal and secular traditions; hence it’s a systemic insult to the idea of India.

It is not easy to witness the chaos that is taking over the country today.