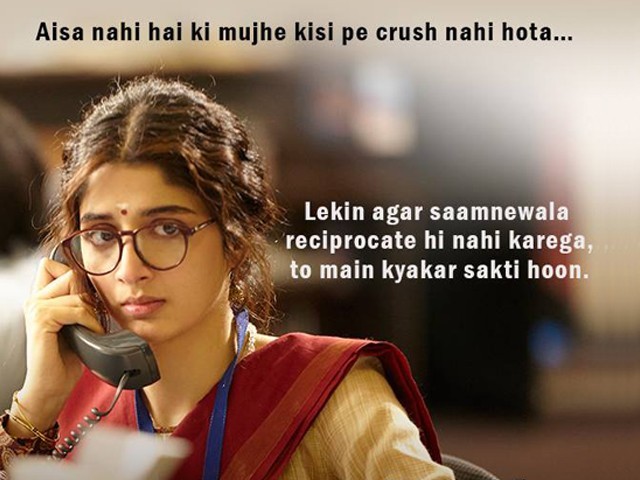 Last week, after watching Mawra Hocane’s Bollywood debut Sanam Teri Kasam (STK), I was oddly overwhelmed. It wasn’t because of the cliché storyline that left the audience weeping but in fact, the social issue that the movie deals with; the purulent shaadi (marriage) problem. The one that is so widespread in our society but yet many fail to recognise.

This movie narrates the story of a 22-year-old who has been rejected by 10 suitors owing to what is presumed to be her nerdy look: the kind that guys allegedly don’t swoon over. In attempts to gain self-worth, the protagonist seeks the rescue of her unfriendly neighbour; she asks him to help her get a make-over from his on-and-off stylist girlfriend. The story then takes an unexpected turn and the twist brings everyone to tears. But the movie, no matter how clichéd it may have turned out to be, deals with an issue, the significance of which people refuse to understand let alone appreciate.

Yes, the shaadi problem: thinking one is too old to be wedded at just 22 and undertaking desperate measures to impress potential suitors.

Recently, a discussion with a close friend made me realise how ignorant our society is. There is a complete lack of empathy which encourages people to turn a blind eye to the issue, or allows them to pass judgements such as,

“Who in this age and time dresses to impress a man?”

Or the more naïve remark,

But what these fellow ignorant beings fail to understand is that their lack of empathy only makes the issue seem insignificant, leading girls after girls to succumb to this building pressure only to be derided for it. And there is only one reason that could make one so naïve: their privilege.

In our patriarchal society, it’s a privilege to be born male, as opposed to the more submissive being – the females. Things come easier to them. Maybe that is the reason why when movies like Wake Up Sid or the more recent Tamasha talk about the pressures put on men, we empathise with their struggle more than if the protagonists were women.

I am not trying to imply that all men are ignorant. There are a few good souls that do realise the burgeoning issue and if they can’t do much for it, at least they don’t cringe at it with a condescending smile or dismiss it in their ignorance. They sympathise and hope to be more respecting towards women and their issues.

However, on the other end of the spectrum are women, whose social class or family status may be their privilege that stops them from acknowledging the issue that most other women face and often succumb to. The problem is that privilege is a tricky thing – it’s difficult to filter through and acknowledge the special treatment you have grown accustomed to your life. Privilege also includes the smaller things that one may overlook on a day-to-day basis.

For instance, having the luxury of travelling alone in autos, it took me a while to stop getting angry at friends who ditched plans owing to ‘transport issues’. By that they meant there was no male figure – a father or a brother – to drive them. Although some people think it’s a legitimate issue to get fussy over, it actually isn’t; if I have had the privilege of being born and brought up in a household where travelling for girls alone through public transport isn’t an issue that doesn’t mean I can hold that against someone who hasn’t seen it any other way. It is only by understanding and being aware of the sexism that colours this issue that can enable us to affect it, albeit a little. Similarly, over the years, I have been able to ace the art of blocking out the comments thrown my way such as losing weight to attract potential suitors – this is an asset other women might not necessarily have.

Unfortunately, the social class I am born in – the one also largely ignored – the middle-class puts constant pressure on me to be a certain size, to marry at a certain age, and when and how many babies to have. It’s a never ending list of things I should or shouldn’t be doing. But my knowledge, which is a complex mixture of both taleem (education) and tarbiyat(upbringing) helps me cope with this daily struggle. It isn’t as though I consciously sought this tarbiyat, it was my surroundings that encouraged me to attain it, something that may not be present to someone else. But my recognition of the privilege I have been given can help educate others and lessen the effects of that privilege.

In STK, Saru isn’t just another damsel in distress. She is an independent, working woman who refuses to let the odds turn against her. She pledges to make the most out of what is given to her, even if it is something as meagre as seeking help from Harsh in the middle of the night or perhaps earning a living on her own. It doesn’t bother me that people didn’t like the movie – everybody can have their likes and dislikes – but what is much more problematic is the inability to recognise the underlying issue; being pretty is definitely not equal to having self-worth but by saying the concept is ‘out-dated’ and pointless to ponder over only reiterates how naïve one is of how contemporary society operates for modern women, especially within the context of marriage (at least in South Asia). Even though it is a systemic change that is required to dismantle the established norms of oppression that dictate our lives, a little recognition and awareness of the issue can go a long way.

But from the looks of it – the random shrugs and the odd remarks – there is perhaps a long way to go to save more and more women from crumbling under the pressure and undertaking desperate measures to conform.

The author is a journalist by profession. A shopaholic, feminist, fashionista and animal lover by nature. She tweets as @ChauhanNisma (twitter.com/ChauhanNisma)

Do Meesha Shafi’s allegations hold no value just because Ali Zafar “looks like a decent guy”?

Lipstick Under My Burkha does not empower women; it only pits woman against woman – one of patriarchy’s best defences

Was Fawad Khan’s decision to play a homosexual a mistake?

Why did Ali Xeeshan use fair-skinned models to promote dark skin?