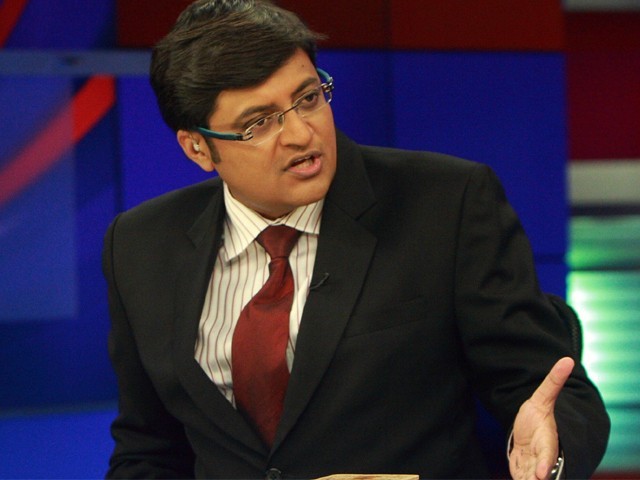 Arnab Goswami didn’t even spare Imran Khan’s ex-wife, Reham Khan. The topic back in October 2014 was ceasefire violations. Hardly had she begun speaking that he alleged that she was part of the military establishment and was narrating ISI’s point of view. PHOTO: THE INDIA TODAY GROUP VIA GETTY IMAGES

There is no doubt that he is flamboyant and aggressive to a fault. That is indeed what draws the viewers in. It’s not his fault. It is how the world of television news operates. He is merely the personification of ‘the good, the bad, and the ugly’ of news channels or perhaps the manifestation of television news at its best. For what else is news media about if not an indulgence in hyperbole, an engagement with trifle, and the desire to project whatever that is being shown as meaningful.

Many have fallen victim to the Arnab Goswami attack; a barrage of verbosity. When panellists sit on his show, their awry smiles or blank stares cannot hide the utter fear that lurks beneath. They wait hesitantly for their turn to the slaughterhouse. When the turn does come, they open their mouths but shut them as quickly, for Arnab doesn’t let anyone speak for longer than thirty seconds, except perhaps his favourite guests, Major General (retd) GD Bakshi and Maroof Raza. The others verily hold their tongues longing earnestly for a moment of redemption or for a right to be heard. But that right is never granted, for it would erode Arnab’s authority.

The man specialises in ridiculing and insulting his Pakistani guests on his show, The Newshour, a live debate anchored by him. Be it Major General (retd) Rashid Qureshi or Fawad Chaudhry, all have taken a beating from him and also given it back in some measure, but hardly any Pakistani guest has emerged unscathed from his attacks.

Khurshid Mahmud Kasuri was one of Goswami’s first Pakistani interviewees. He interviewed the gentleman in Pakistan’s Delhi Consulate right after the Samjhauta Express attack. The interview was forcibly terminated mid – session because Arnab was not giving the Pakistani Foreign Minister enough respect, whatever that means. That must have left him more than a little begrudged against Pakistan.

The hot-headed Qamar Zaman Kaira was also a guest on the highly rated show back in September, 2014. The whole time, he was endlessly defending his party chairman Bilawal’s hogwash rhetoric on Kashmir, pleading or rather scolding Goswami to ‘be patient and let him answer’. But of course, Goswami being Goswami would never let him finish. Kaira eventually walked out of the show.

One of the only times Arnab has been left speechless was when Zafar Hilaly was sitting on the other side. He asked the ambassador a few pointed questions about ISI’s funding of Dr Syed Ghulam Nabi Fai. Hilaly simply replied that it was a ‘great thing’, and he wished that ISI had financed Dr Fai even more. All Goswami could retort with was the usual,

“You haven’t answered my question.”

Arnab Goswami didn’t even spare Imran Khan’s ex-wife, Reham Khan. The topic, back in October 2014, was ceasefire violations. Hardly had she began speaking that he alleged that she was part of the military establishment and was narrating ISI’s point of view. Reham was obviously amused and bemoaned that he was showing lack of respect for a fellow journalist, which of course had no effect on Goswami. He ended the show by saying that Pakistan would be pulverised by India.

Arnab’s best Pakistani encounter came in January 2013, and perhaps the one that he would most like to forget. It would not be incorrect to say that General (retd) Pervez Musharraf bludgeoned him. The topic was Siachen beheadings, and while Goswami had the upper hand morally, he quickly squandered that by being belligerent as always. That got Musharraf all riled up, and he of course is an ex-commando; when he gets bellicose, all bets are off.

It may be that all these encounters solidified his morbidly anti-Pakistani views or perhaps the dislike has been ingrained in him from way before – his father after all was a colonel in the Indian Army.

How can we turn him around though?

The solution is simple.

He has to visit Pakistan.

Barkha Dutt, whom I met with last September, was a similar case. But she readily changed. She claimed on Hamid Mir’s show, Capital Talk that after visiting Pakistan, she had morphed from an anti-Pakistan hawk to a dove.