This is how Pakistan fights terrorism everyday 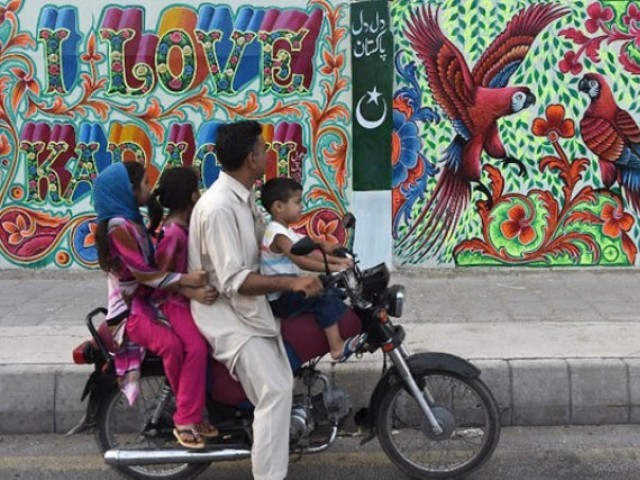 The ‘I Am Karachi’ project that took place in 2015 which aimed to rid Karachi’s walls of hate graffiti and replace them with positive visuals. PHOTO: AFP

It is a given that life and everything that pertains to it is in a constant state of change. Furthermore, it silently urges all the material and immaterial to be subject to that change. As individuals, with every second and experience, we adapt and find ourselves ever evolving just the same.

With this notion in perspective, it is equally evident that the aesthetic of art has evolved as well, for what once was associated with the beautiful, is now just as closely tied to the disturbing and the chaotic. But how and why has that sensibility evolved?

‘Aesthetic’ is anything that evokes a sensory experience and is inclusive of the visuals we experience on a daily basis. Over the past few decades, terrorism and violence have seeped into our everyday lives. Therefore, it will come as common knowledge that, now more than ever, violence has penetrated our definition of aesthetic. Therefore, its inclusion is not a fault of aesthetics, but that of the world.

But where does art fall amidst the violence and terror that we are growing mind-numbingly accustomed to? What role does it play?

First, let us establish the role of art itself within a generalised context.

This is a question that boggles the average individual. To all those who believe art serves no purpose, I would shamelessly argue that they are stuck in a box of pretence that is so small that they cannot seem to surface from it. People undermine the power of visuals. I’m sure you’ve heard the phrase ‘a picture is worth a thousand words’. That’s because there is truth to it. As an artist, no matter what form the work presents itself in, I can make you think along my tangent and we can revel in the produce of that train of thought; the translations of my curiosity and my subsequent revelations. If authors write, musicians sing and actors perform while the majority of people commemorate the fruits of their labour, why is visual art any less significant?

And just like any other form of art, visual artists produce because they have something to say.

This brings us back to the former part of this article: where does art fall amidst the violence? The increasing evidences of terror in the world appall the average individual. And it comes as no surprise that artists take these matters as inspiration to form dialogues. These dialogues serve as pleas and make the viewer gasp within the crux of the discourse. An example can be found in one of Pakistan’s leading artists Adeela Suleman; whose recent exhibition at Canvas Gallery titled ‘Dream of Carnage’ beautifies heavy connotations of bloodshed and barbarity, commenting on the manner in which we as a society have become numb and unreactive to such condemnable instances.

Another example is that of Imran Qureshi’s installation at the Sharjah Biennial in 2011 titled ‘Blessings upon the Land of my Love’ and ‘And How Many Rains Must Fall before the Stains Are Washed Clean’ at the Metropolitan Museum of Art in 2013. Imran’s work speaks as a cry against the blood that has been shed, his floral forms echoing with hope for regeneration.

Imran Qureshi, ‘And How Many Rains Must Fall before the Stains Are Washed Clean’, 2013, acrylic.
Commissioned by the Metropolitan Museum of Art, New York for the Iris and B. Gerald Cantor Roof Garden.
Photo: metmuseum via Instagram

An article appeared recently featuring a Pakistani, Gauhar Aftab, who wrote a comic book to counter terrorism. One statement that stood out in the article was,

“… the menace of terrorism could not be resolved by bullets and bombs but it had to be fought with ideas.”

Within a generalised context, what Aftab believes is that differences can be made if people are made aware and concerned of the dynamics they find themselves in as opposed to establishing control with barbarity.

The same notion is carried forward by the aforementioned artists along with many others who reach out to their viewers to recognise that which is not being addressed. Emerging artist Sarah Kazmi elaborates on the role of the artist in such socio-political dynamics,

“Art is hugely contributing in bringing the audiences/spectators closer to art and their present surroundings.”

However, the question that arises amidst this conversation is whether artists can maintain a dialogue long enough to be able to have an impact. Another local emerging artist Maryam Hina Hasnain commemorates the success of an earlier exhibit:

“One of my favourite exhibitions locally was ‘The Rising Tide’ show at the Mohatta Palace a few years ago. Some of our most prolific local artists were exhibiting – a significant portion of the artists were creating work around issues of terrorism. A few years later, I find our conversations still haven’t shifted…”

She adds that in order to find a resolve one needs to “encourage a sustainable dialogue”.

Well, how does one sustain a dialogue?

Maryam and Sarah (both being unfamiliar to purely activist art) participated in the moving exhibition titled ‘Is Saye ke Parcham Talay’ addressing issues around the condition of minorities in Pakistan. They both acknowledge how the participation of the viewer changed the discourse of the work itself. They state this was made possible by breaking away from the boundaries of a gallery space and letting those that do not frequent art galleries to engage in the conversation. Karachi-based artist Zulfikar Ali Bhutto (Junior), who fuses art and activism together, speaks of the condition of the artist,

“Artists must be active in order to inspire change.”

Zulfikar adds that our definition of what classifies as art must evolve and should not be “relegated to galleries” so that our ideas can reach the masses;

“Art spaces should be made multifunctional, open and communal in order to effectively break down class barriers and create inclusive conversation.”

When prompted to comment within the context of violence, Zulfikar comments,

“Bringing down terrorism is not about arresting and executing people, which is counterproductive. Let us also not forget that terrorism is not simply one group against another. It is made up of a whole system of international politics and economy and in Pakistan it is accompanied with a heavy dose of class inequality. I do not claim to have an answer for this. That would be arrogant. But creativity and equal opportunity to creative expression is an important vent into which people can resolve their problems in more productive ways.”

And there are evidences of such advances taking place such as the ‘I Am Karachi’ project that took place in 2015 that aimed to rid Karachi’s walls of hate graffiti and replace them with positive visuals. Another prominent initiative is that of Pursukoon Karachi from 2013 onwards that hosts public events in retaliation to the barbarity that we have become privy to, and uses this platform to promote peace to the masses. There is also the promise of future initiatives such as the 1st Karachi Biennale that is to take place in 2017, the goal of which is to address topics that engage the public in relevant discussions.

I Am Karachi project reclaims walls of the city.
Photo: AFP

Toy guns were collected and destroyed to condemn the use of violence.
Photo: The Express Tribune

It becomes evident that despite how powerful art can be in connecting one with their surroundings, any dialogue that it generates will fizzle out unless it expands its outreach. For these reasons, art should be accessible to the masses. It is then that those dialogues escape restricted spaces and find themselves resonating within the hearts of the people. These aforementioned creative advances, along with many others, spark optimism and stand as examples of initiatives that should continue to follow and multiply. These interactive platforms generate hope that we are inching closer towards finding a resolve.