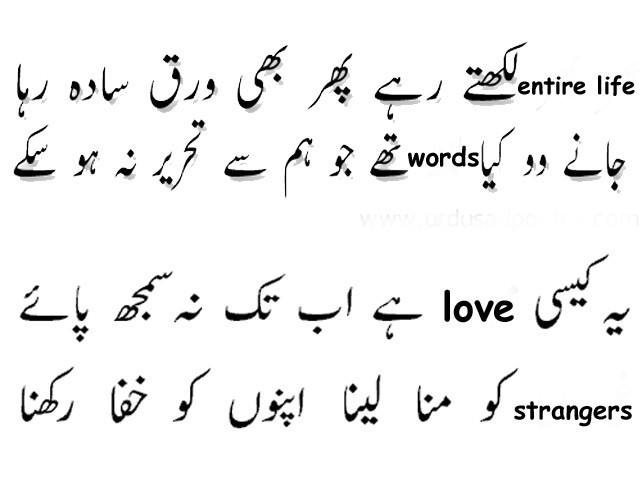 I wish more people had corrected my Urdu and pushed me towards improving it.

(We have always treated Urdu as a step-child and the worst part is, in order to fully understand our native language, we seek help from a foreign one.)

It hits hard, doesn’t it?

Sadly, what we never realise is that language is an art that breathes with those who breathe it. It matters not which language you speak, neither does is matter what your prowess is in the language, but what does matter is the respect any and all languages command. If the respect is lost then eventually so will the language.

“Mujhay dard ho RAHI hai”, is a classic example of many of the sentences I have grown up listening to from friends who proudly state that their Urdu language skills are poor but are the grammar police when it comes to English. I am myself guilty of the latter. However, I am trying to get rid of this habit.

Yes, English is an international language and should be spoken properly. But that is the case for every other language. Why has it become so acceptable to not know Urdu well?

Years ago, when my late grandfather said to me, “Naimat khanay mai rakha hai”, I did not know what ‘naimat khana’ was and I believed it was not such a big deal to not know. But years later, I wish I had put more effort in learning my own language. I wish more people had corrected my Urdu and pushed me towards improving it.

However, unfortunately, I belong to a generation which was taught that communicating in English adds more value and credibility to one’s discourse. I was made to believe that conversing in English reflects that I am well-educated and cultured.

Moreover, it did not just matter if I spoke English, but it also mattered how well I spoke it, that is, how well I could impersonate the accent of the native speakers.

It took me many years of education to realise how I was still under the influence of my ancestors’ colonial masters.

In 2014, while attending a summer school in The Hague, a Columbian friend commented that from my accent she could not tell where I am from because I sounded mostly American and sometimes British.

Back in Pakistan, and during my teenage years, when I was trying to learn how to converse in English, I would have taken this as a compliment. However, this time I felt sad. I was surrounded with people who spoke English with beautiful Arabic, Italian, French and Spanish intonations and I could instantly tell where they were from. But my nationality was always a question mark for most.

Ever since I came to the Netherlands for my Masters, I have been surrounded by people from all nation states of the European Union. Many of them struggle with English during classes. I feel so much more at ease speaking English with and in front of them than I did at my university in Karachi, because here nobody judges or makes fun of people if they mispronounce a word or make a grammatical error. They do not think that mastery over the English language defines them. In fact, in a friend’s Economics class, a student read (with all honesty) the sentence ‘Niger cannot pay its debts’ as ‘Nigger cannot pay its debts’ and everyone more or less managed to keep a straight face. Back home, this would have been equivalent to social suicide.

Even my Dutch, Greek and Belgian teachers struggle with speaking in English at times and sometimes they cannot find the right word in English for a word from their language and they turn to the students for assistance. Back home, I remember we often evaluated the teachers not on their teaching skills but on how well they spoke English.

Europeans have taught me to take pride in my language. They (minus those from the United Kingdom) completely own up to the fact that English is not their native language and they feel no shame in struggling with it. My Italian and Spanish housemates often tell me that they feel I am a native speaker of the English language. And the only person who tries to correct my haywire sentences when I am speaking, is an Indian friend, who is a PhD student and I guess suffers from Stockholm syndrome like many of us do, back home, thanks to colonisation.

Living in a foreign country has also made me appreciate Urdu. Before, I never paid much attention to its beauty and the comfort which it provides. Now I anticipate speaking in Urdu after a long day of speaking in English. I jump at the opportunity to have a conversation in Urdu when I am with an Indian or a Pakistani.

When my European friends hear me conversing in Urdu, they often comment on how beautiful the language sounds. Two of my Indian friends have confessed to me that they find Urdu more eloquent than Hindi. I quote Ghalib, Iqbal and Faiz with pride to Indian friends who appreciate poetry and in return they recite Javed Akhtar’s poetry from Zindagi Na Milegi Dobara. It is a shame that I always took Urdu for granted and it took traveling thousands of miles away from home to stop doing that.

I do not know how, when and why the mentality that Urdu is a lesser language and it is all right to not know it well seeped through our people. I have heard people suggest that we should do away with Urdu altogether and should make English the national language. Their argument is that Urdu serves no purpose and is not widely spoken around the world. As a reply to them, I often quote the example of the Dutch language. It is spoken in the Netherlands, a tiny country on the world map and in Belgium. A total of 28 million people speak it and yet in the Netherlands the Dutch take pride in speaking Dutch as much as possible. It is the official language and most business is conducted in Dutch unless it involves people who do not speak Dutch.

Urdu has over 70 million native speakers, so I do not understand why people claim that it is a useless language. No language is useless unless the speakers of that language decide to abandon it. People add importance to the language by speaking it, promoting it and taking pride in it.

P.S: The first sentence has a mistake in it. That was our litmus test. Did you pass?