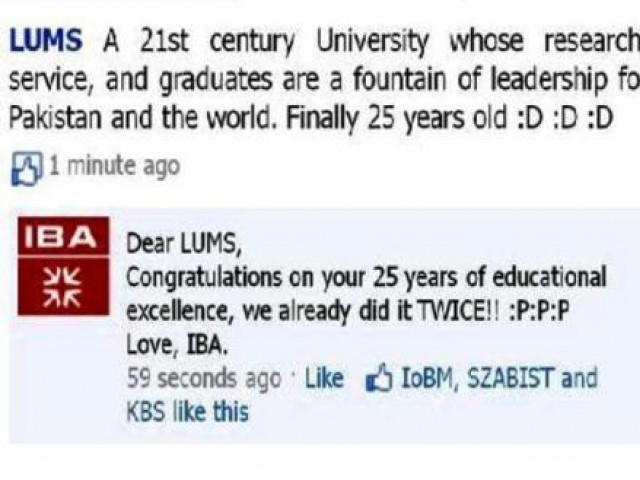 A screen shot of an example of the online rivalry. PHOTO: CYBERDERA.COM

In an age of no scarcity in rivalries, new borders are being drawn. This time students of Pakistan’s two premier business schools are trading jabs at each other, vying for the enviable title of the country’s best educational institution. Competition may not always be healthy but for the neutral observer it is always highly amusing. And so, as an unbiased observer who graced the halls of neither IBA nor LUMS, I would like to present a collection of arguments (based on impeccable logic and verified facts) presented by either side as to why one has always trumped the other.

Confident and self-assured, his first question is: “Are you from LUMS? No?”

Their mental process seems to contain a simple binary classification: LUMS or not LUMS.

The opinion on IBA is simple. “It’s not even a university! It’s an institution.”

Clearly, HEC needs to have some form of bifurcation to define the difference between the two.

The LUMS student (or LUMINITE as they prefer to be called) then informs me of the well-rounded education they receive, the independence they gain while living in a different city (by that argument, citizens of Lahore should go to IBA instead) and the exposure they receive to different personalities during their time in college. To top it all off, LUMS clearly has the best music scene. Those poor IBA graduates have no flexibility in their courses (and their thinking) and are stuck with the same people throughout their four years. Now we know which students are more promiscuous anyway.

A common complaint that employers have is that LUMS graduates are much more fickle than their IBA counterparts. Surprisingly this claim is not denied by LUMINITES (a title which bears striking resemblance to a certain wood-gnawing insect and an ancient cult group known for their obsession with ambigrams). They claim that they need a job that something more intrinsically fulfilling and that repetitive tedious tasks are hardly what their degree merits.

Displaying more restlessness than a New Yorker waiting at a pedestrian crossing, he elaborates on the number of assignments, exams, quizzes and courses he has to juggle whilst keeping up appearances at social gatherings. The prima donna of college then recounts the hours of sleep he lost during his stint at IBA.

Sleep deprivation at IBA may single-handedly drive the institution’s case to elevation to university status, assuming LUMS takes over the responsibilities of the HEC. IBA students are apparently preferred by employers because of their ability to put their head down and work even the most repetitive of tasks. An IBA graduate was once known to work at a drainage cleaning firm without complaining about the quality of work even once.

Furthermore, he miraculously got along with all his coworkers and sported a smile at all times. The IBA graduate could recite the text contained in most of his books – backwards. Regarding his LUMS counterparts, the IBA graduate marvels at how their heads can contain so much hot air. The famed IBA diplomacy having deserted him here, he points out that the only practical skill they learn is how to talk – excessively. What LUMS considers critical reasoning and analysis, IBA considers fluff. The IBAian (the verdict is still out on the pronunciation) then informs me of the job he has to get back to, unlike his job-deprived LUMS counterpart, and leaves with the same bustle he entered.

As the battle for the best institution rages on, a single fact is clear: these institutions have imparted their students and alumni with an identity and pride that they are willing to defend, a hallmark of reputable institutes of learning the world over. Meanwhile, acronyms such as CBM, SZABIST and MIT may as well be the initials on a license plate number for the fine graduates of these institutions.