If you think the niqab is a choice, think again 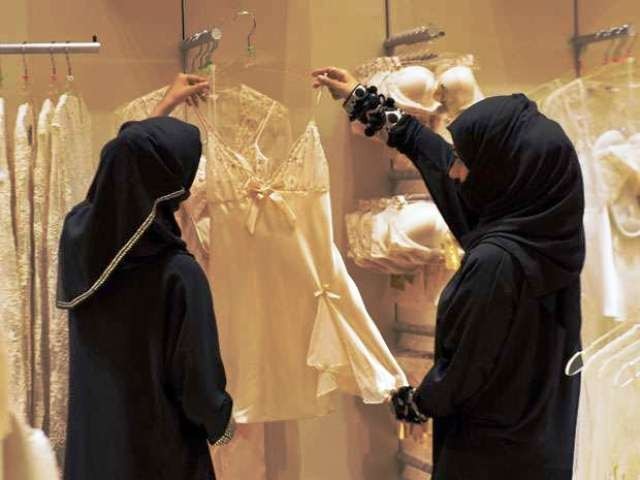 Whenever I fly to Saudi Arabia, I find the women on the flight, expatriate or Saudi, donning colourful western, Middle Eastern, or Asian clothes one second, and dark abayas the moment the airplane hits the runway in Saudi Arabia? PHOTO: AMER HILABI/AFP/Getty Images

In my recent article, ‘Our national dress is the shalwar kameez, not the niqab’, while examining countries in and around the geographical vicinity of the Middle East, I lamented the loss of cultural riches such as art, music, various religious festivities, as well as heritage sites like ancient temples and monasteries to a single fast-spreading inflexible ideology. To drive the point home, between a dozen countries, I compared various cultural garments with the full single-colour veil called the niqab, also known as the abaya or the burqa.

The contrast was startling.

On one end were 12 aesthetically delightful national dresses varying from one to the next like 12 seasons designed by Mother Nature herself, and on the other was a single dark and restrictive attire, standing out like a uniform for the circumscribed.

Thankfully, the thousands upon thousands that shared the article had little difficulty comprehending the symbolism:

Across dozens of countries; for every temple ransacked, for every monastery brought to its knees, for every language lost, for every painting vandalised, for every statue broken into a hundred pieces, for every book, essay, and piece of poetry declared illicit, there has been an austere binding rule.

The degree with which this cultural appropriation scorched nations has varied.

Take a long hard look at this Middle Eastern man:

At a British museum in 2003, he was overwhelmed with emotion when he found treasured Iraqi antiquities safe from conflict. I can only imagine the pain he feels today at the destruction of the world heritage sites in Iraq and Syria at the hands of the Islamic State of Iraq and Syria (ISIS).

Unfortunately, the nuances of ‘Our national dress is the shalwar kameez, not the niqab’ were lost on some of the local readership. In response, many argued that for women, much like a pair of jeans and a t-shirt, or an Indian sari, a niqab was as an outfit of choice.

To start with, what is choice?

Does that man who lost both of his arms in a factory accident, and now stands begging for money at an intersection I pass every day, have a choice? Sure, he willingly gets out of bed every morning to do what he does, but does this translate to choice?

I think we can all agree that when it comes to choice, there are different degrees. Action doesn’t always translate to the same level of choice.

Here are some American slaves on a sweet potato plantation in the mid 1800s.

There doesn’t seem to be a gun to their heads, but are they farming by choice? At the peak of slavery, many slave owners also built a narrative around how slavery was beneficial for slaves. Some slaves were psychologically conditioned into believing this. Not only did slaves called ‘House Negroes’ whip other slaves into submission for their masters, but some refused freedom when it was offered to them.

Did they have a choice?

These are women on a typical street in Saudi Arabia:

Sure, they willingly put on the abaya before leaving home, but how much of a choice do they have when wearing anything else will mean being abused by their husbands, fathers, brothers, or the armed mutawas (religious government police) prowling the streets?

How much of a choice is the niqab, if whenever I fly to Saudi Arabia, I find the women on the flight, expatriate or Saudi, donning colourful western, Middle Eastern, or Asian clothes one second, and dark abayas the moment the airplane hits the runway in Saudi Arabia?

How much of a choice is the niqab, if Pakistani women who work as domestic helpers in big cities often wear shalwar kameez when in upscale neighbourhoods, but don the black cloth when going home to avoid catcalls, sexual harassment, rape, or worse?  Is the niqab really a choice when so many Pakistani women wear it out of fear?

Moreover, why is the onus on women to protect themselves by wearing a mentally suffocating garment? Why can’t those who force the niqab wear blindfolds?

A decade ago, while new in Pakistan, I was stunned when our family was dropping off a domestic helper to her home at night, and she quickly put on the niqab when close to her neighbourhood. When I later asked her why, she said,

(If I don’t, men in the area will use it as an excuse to malign my character, and perhaps kidnap me [for sexual abuse])

Here are some Muslim women in ISIS controlled Syria:

If the niqab is a choice, why is ISIS ‘encouraging’ them to dress like this? Why aren’t they wearing a kurta, a shalwar kameez, a sari, a skirt, or a pair of jeans and a t-shirt?

Here is a 19-year-old Afghan girl Rokhsahana. She ran away years ago to Iran after her family forced her to marry an old man. Her people somehow got hold of her and eventually stoned her to death while she screamed and begged for mercy.

Notice the outfit they forced her to wear in her final moments. Is the veil really a symbol of choice? This woman spent her entire life suffering decisions made by other men. The niqab was but one of them.

Here are some of the 250 schoolgirls kidnapped by Nigerian terrorist outfit, Boko Haram:

The niqab they were forced to wear doesn’t cover their faces, but it is a version of a niqab none the less.

The Guardian reports that the women captured by Boko Haram face,

Here are some schoolgirls who managed to evade Boko Haram. They have now found a new life in Oregon, United States, thanks to a non-profit organisation.

One of the escapees, Grace, says,

If the niqab is a choice, why do these young women not wear it in a place where they are free to dress as they please, away from the grip of an organisation that forces the garb?

Yes, many women in western society freely wear the niqab, but is it really a choice when they consciously or subconsciously wear it out of fear of being ridiculed or ostracised by their community? Is it really a choice when they wear it for fear of facing eternal damnation in the afterlife because of a hard-line interpretation that, according to many scholars, contradicts passages of the very scripture they follow?

Consciously or subconsciously, how many other unified outfits in history have a large number of people been scared into wearing?

Of course, fear can do funny things. Sometimes, it psychologically conditions the oppressed into oppressing their own:

Some critics argue that the niqab is similarly frowned upon by western societies as are western outfits in portions of the Muslim world.

First of all, some western societies may not welcome the niqab, but are happy to see just about any other outfit in the world, be it a sari or a skirt. On the other hand, parts of the Muslim world only enforce one outfit on women, and that’s the niqab.

There is also a reason behind the burqa ban movement, and that’s because the black veil stands as a symbol of oppression.

The following outfits aren’t well received in western societies either:

Take a look at how these slaves are dressed:

And people of this concentration camp:

How does it compare to this?

Tellingly, the majority of outraged comments on my ‘Our national dress is the shalwar kameez, not the niqab’ article came from men themselves. Once again, an outfit is forced upon by the powerful on the powerless, once again as a tool of suppression. Here, it is an instrument to further misogyny, convincing some of those who wear it that it is for their betterment.