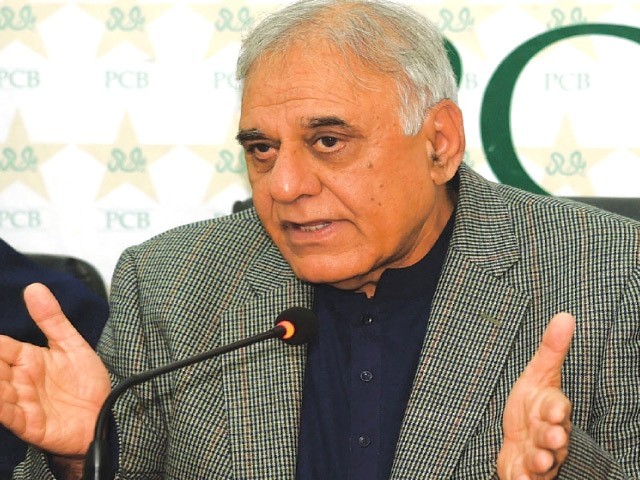 With reports emerging that Haroon Rasheed’s job is on the line, there may not be a method to the madness but at least there may finally be an end. PHOTO: AFP

It’s the move that sums up his time as chief selector of Pakistan and it might be the move that will determine his fate at Pakistan Cricket Board (PCB) headquarters.  It just isn’t a Pakistan World Cup squad announcement without some controversy; add Haroon Rasheed as chief selector to the equation and you were bound to have one of the more bizarre selections even by Pakistani standards.

In a move which would make Theo Walcott’s inclusion in the England squad for the 2006 World Cup seem justifiable, Khurram Manzoor was picked over Ahmad Shahzad and Sharjeel Khan for the second opener slot. You will have the usual candidates in the media supporting this selection for obvious reasons and they will put forward reasons that they never needed in the first place to convince themselves of Khurram’s case.

These reasons will include him performing in the Haier T20 Cup in September but will not mention that he was the third top scorer on his own team, performing in the recently concluded One Day tournament. They will not mention the two hundreds were against weak region teams and also comprised two scores below 10 including a duck and also his recent century against England Lions for Pakistan A. They will not mention he failed to score above 40 in the remaining matches and what will never be mentioned is that these recent performance have nothing to do with the T20 format; a format in which he has never represented Pakistan.

In fact, Haroon Rasheed had multiple chances to test out Khurram before the World Cup, due to his decent performance in the domestic T20 cup, including series against Zimbabwe, England and New Zealand. He was even overlooked by the selection committee for the T20 series against England Lions late last year, illustrating how far he was from their thoughts. Here is a player overlooked (albeit wrongly) by the five franchises for the Pakistan Super League (PSL), unwanted by the Pakistan coach, yet was inducted in the squad for the World Cup in the most hostile of environments.

What makes this selection even more inexplicable is the fact Khurram’s name did not even come up for a pre-New Zealand tour camp of 26 players. Surely if Ahmad Shahzad was to be dropped for his poor form then logic suggested his replacement should have been the person called up to that camp by Haroon Rasheed; Sharjeel Khan. But Haroon Rasheed seems more allergic to logic than a dog to chocolate.

None of this is to put down Khurram Manzoor, who I believe to be a fine player in his own right and whose backers might be doing him more damage than good as with another Karachi player. But his selection is just another one of many that are bereft of any rationality and displays the dangers of a selection committee lacking a coherent strategy and making moves as they go along.

The T20 World Cup will represent a year of Haroon Rasheed being the chief selector of Pakistan and while normally one would call it too soon to judge if performances were the only cause for concern; it is the arbitrary nature of selections that is even more alarming and understandably exhausting the patience of the higher ups in Lahore.

One of the claims when introducing his first squad as chief selector for the tour of Bangladesh was the need to bring stability. The irony will not be lost on many when he has overseen one of the most turbulent years in Pakistan cricket and his revolving door approach, better explained here with as many as nine debutants in ODIs alone not including random selections such as the return of Mohammad Sami against Zimbabwe, resulting in Pakistan sliding down the rankings. Debuts in themselves are not a problem but when coupled with an absence of a plan other than to please everybody, all it achieves is cheapening the shirt.

Quite simply it seems that the chief selector would have formed a more coherent strategy if he chose his teams from a lucky draw. This was perfectly encapsulated by certain decisions over the last two months, for example despite poor performances Sohaib Maqsood was somehow rewarded with a call up to the ODI team as well and has now been dumped from both formats.

Iftikhar Ahmed, whose initial selection against England was a surprise in itself, has been included in the World Cup squad despite not being able to make the playing XI against New Zealand over players that have now been dropped (Maqsood and Mohammad Rizwan). Saad Nasim, who also somehow found himself on the plane to New Zealand, has in classic Pakistan fashion, been dropped without playing a single game on the tour, a fate shared by Aamer Yameen. It is such thinking, or lack thereof, that resulted in Bilal Asif, a player averaging less than 15 runs domestically, opening for Pakistan in ODIs.

It was the One-Day team that was reeling from a disastrous World Cup which required a transformation that brought it closer to modern times, where Haroon Rasheed would be ultimately judged. The Karachi born former batsman spoke of the need for a strategy and improving Pakistan’s limited overs fortunes as a priority. However, barring a series win over Sri Lanka, the performances have been poor and the changes cosmetic.

Take England as an example who were in an even more sorry state than Pakistan in limited overs cricket after the World Cup. However, less than a year after taking over, Andrew Strauss has transformed their one day team and turned them into an extremely promising side. While England have outlined a brand of cricket, picked players that fit that brand and stuck with them through initial tough times, Haroon Rasheed’s method slightly differ.

It seems all it takes to play for Pakistan these days are a couple of decent performances in a domestic tournament. How else can the selections of Nauman Anwar, Mukhtar Ahmad, Bilal Asif and Imran Khan Jr be explained?

All had fine performances in certain domestic tournaments but were not yet of the quality to represent Pakistan. A selector’s job is to delve deeper than just reading stats. In order to distinguish themselves from keyboard warriors of PakPassion, they should have an eye for the game and recognise the strengths and weaknesses of players.

What exactly Haroon Rasheed saw in Rafatullah Mohmand, Saad Naseem or Iftikhar Ahmed to convince him of their ability is beyond this writer. But watching these players get exposed at the international level made for painful viewing.

Haroon Rasheed took over a settled Test team doing well but could not help but meddle with that too as his first selection saw Ahmad Shahzad and Shan Masood canned for Sami Aslam, a player thrown into the deep end before his time and who, predictably faltered. Perhaps it is his treatment of Sami Aslam which best defines his tenure as chief selector.

Brought into the team too early, he was played in multiple formats, and then binned to never be heard of again. In fact, Shahzad and Masood returned only a series later for the tour of Sri Lanka and it was the latter’s match winning hundred along with Younis Khan that decided that series.

Perhaps Haroon Rasheed’s most notable impact on the Test team was his failure to include a back-up spinner in Pakistan’s squad against England which incurred the wrath of Misbahul Haq after Yasir Shah’s injury and his initial refusal to include Shoaib Malik into the Test team, who turned out to be a key part of Pakistan’s triumph. It would not be remiss to say that the Test team’s success was in spite of Haroon Rasheed, not because of him.

Before the England T20 series, Captain Shahid Afridi spoke of the need to have a settled team for the World Cup. One wonders what he made of its World Cup squad including five players (Rumman Raees, Iftikhar Ahmed, Babar Azam, Khurram Manzoor and Mohammad Nawaz) who have never represented Pakistan before and this despite Pakistan having played its last T20 less than a month ago. With reports emerging that Haroon Rasheed’s job is on the line, there may not be a method to the madness but at least there may finally be an end.