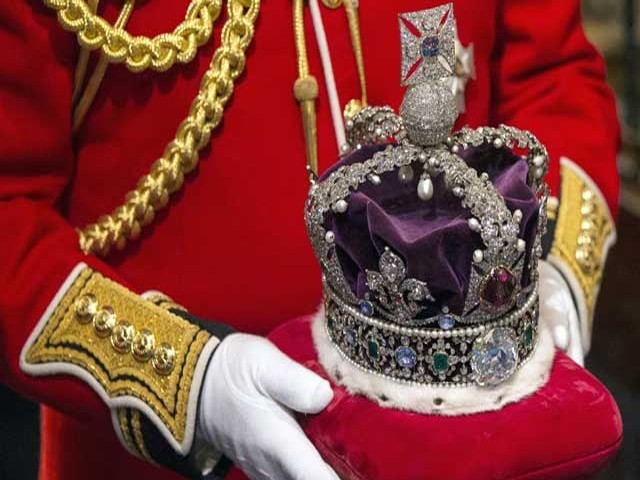 The Lahore High Court has agreed to hear a petition asking Queen Elizabeth II to return the Koh-e-Noor. PHOTO: REUTERS

The most precious diamond England had before usurping the Koh-i-Noor from India was none other than William Shakespeare. But the legendary bard, unlike his avaricious countrymen, himself never coveted stones and riches. What he longed for was content, a pleasure which only a man with a heart and passions could enjoy.

“My Crown is in my heart, not on my head:
Not deck’d with Diamonds, and Indian stones:
Nor to be seen: my Crown is call’d Content,
A Crown it is, that seldom Kings enjoy.”

Needless to say, if Winston Churchill had 0.1 per cent of the writer’s virtues, the world would have been a far better place.

India has been urging its former colonial master, Britain, for decades to return the Koh-i-Noor diamond to the country it was taken from. It seems my Pakistanis brothers have also, at last, realised that they were also subjected to the British rule for 200 years. The Lahore High Court has agreed to hear a petition asking Queen Elizabeth II to return the precious stone more than 150 years after it was surrendered by a young Sikh prince to the island nation following their conquest of the Punjab in 1849.

I wish Pakistanis all the very best in this regard and I hope they succeed in making the British do the right thing, a task in which we have been rather unsuccessful in doing so far. The former colonialists do not turn a hair.

For 200 years Britain plundered and tormented India to the hilt, to the extent that the word ‘loot’ has become a part of their dictionaries. Why, at the beginning of the 18th century when the East India Company treacherously set its foot in India, the ancient country’s share of the world economy was 23 per cent and by the time they bid farewell to their slaves in 1947, it had dropped to less than four per cent.

India’s first Prime Minister Jawaharlal Nehru – who in my view was in a class of his own – wrote in his book The Discovery of India – how Britain’s so-called ‘Industrial Revolution’ was a result of the deindustrialisation of India. They destroyed the flourishing business of Indian textiles so that their people could manufacture goods using Indian raw materials and export finished products back to the Colony and the rest of the world.

In this manner, according to Congress leader Shashi Tharoor, India became the biggest importer of British finished products instead of being a great exporter, which it once was.

Today, my mind also dwells upon the tragic famine that struck Bengal in 1943-44. It was not a natural famine. It happened after Churchill inhumanly ordered the diversion of food from dying Indians to stout British soldiers and the well-fed European stockpiles.

“The starvation of anyway underfed Bengalis is less serious than that of sturdy Greeks,” Churchill is said to have argued.

Nehru in The Discovery of India cites a scientific survey conducted by Calcutta University in the famine areas, according to which as many as 34,00,000 people died due to the famine in Bengal alone.

Can you imagine that?

He wrote, “This famine unveiled the picture of India as it was below the thin veneer of the prosperity of a small number of people at the top – a picture of poverty and ugliness of British rule. That was the culmination and fulfilment of British rule in India. It was no calamity of nature or play of the elements that brought this famine, nor was it caused by actual war operations and enemy blockade. Every competent observer agreed that it was a man-made famine.”

For the British though, it was a ‘normal occurrence’.

However, the biggest reason I bear the British a grudge is a diabolic role they played in the partition of India.

It all started in 1857 when Hindus and Muslims together fought the first war of independence to overthrow the British Raj. The colonialists somehow managed to crush the rebellion which could have rightly ended their Indian adventure then and there, realising that in order to rule Indians it was necessary to divide them along the lines of caste, creed and above all, religion.

I do not by any means suggest that differences did not exist between Hindus and Muslims, but they were not insurmountable, for after all we were all sons and daughters of the same soil. The British began playing mind games, pitting Hindus against Muslims and vice versa. By appearing to favour one community over another, they sowed the seeds of discord and enmity amongst us. It was not a coincidence that most of the well-paying government jobs went to Hindus by virtue of their good English skills.

Whenever communal riots – fomented by them – broke out in our cities and towns, the British administration would remain a mute spectator like Modi was in Gujarat in 2002 or Shahid Suhrawardy during the ‘Great Calcutta Killings’ in 1946 or Rajiv Gandhi in 1984. They did not make any attempts nor did they allow us to bridge our differences. They kept India’s communal pot boiling to carry out their nefarious designs.

Even today, ladies and gentlemen, these forces are not letting us make peace, turning us into a big market for their arms industries. The millions of poor people are being compelled to carry on with their wretched lives even after 68 years of our so-called independence.

They can’t eat bullets and missiles, can they?

For the sake of world peace and their own, our former rulers should apologise for the blunder of Himalayan magnitude and the biggest crime against humanity they committed in 1947 by dividing the people who once lived cheek by jowl.

All the perfumes in Arabia cannot wash away thy sins, Britain. Not even Koh-i-Noor!