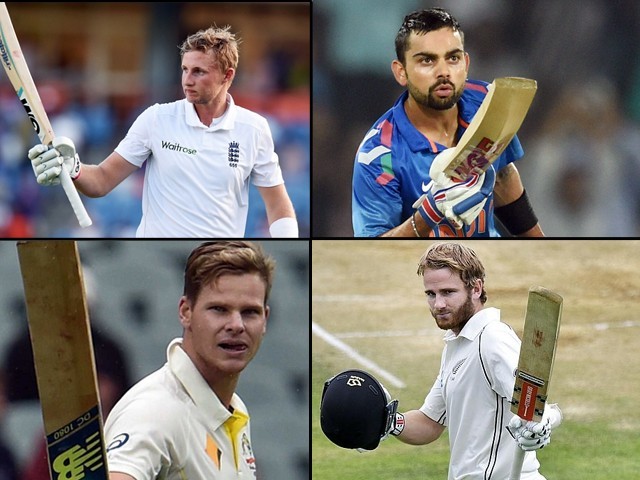 Steven Smith, Joe Root, Kane Williamson, and Virat Kohli are all in the top ten in the ICC Test rankings for batsmen.

There is nothing better than watching a brilliant cover drive or a solid defensive push from a high-quality batsman. But it seems cricket has lost all its excitement and enthusiasm with the retirement of world-class batsmen such as Sachin Tendulkar, Ricky Ponting, Jacques Kallis , Rahul Dravid, Michael Clarke, Kumar Sangakkara and Mahela Jayawardene. There are exceptions, of course, such as Younis Khan, Hashim Amla and AB de Villiers who still know how to swing a bat impeccably.

But all hope is not lost. A few noteworthy youngsters have repeatedly proven themselves and may end up becoming some of the best batsmen of the world. The names that deserve to be on this list are Steven Smith, Joe Root, Kane Williamson and Virat Kohli. They have made their way into the top 10 ICC Test rankings; though it remains to be seen which one of these will become the leading contemporary batsmen.

It is safe to say, the coming years will mould Root into one of the finest English batsman.
Photo: AFP

This 25-year-old is tipped as one of the brightest stars for the English side. Slim and lean, Root depends more on precision than the strength of his stroke. His patience and stubbornness at the crease makes him a dependable batsman.

Root can perform well at home and away, such as his series against South Africa and West Indies. He can also adapt to subcontinent conditions like India, Sri Lanka and UAE. Despite Root’s unfortunate performance at the Ashes in Australia, he made a strong comeback, accumulating an unbeaten 200 runs at Lord’s against Sri Lanka. His consistency as the fifth batsman in the English batting line-up has helped him cement his place as one of the best batsman of his team.

It is safe to say, the coming years will mould Root into one of the finest English batsman the country has produced.

At only 27, Kohli has plenty of time to flaunt his tremendous talent and become a true heir to Sachin Tendulkar.
Photo: AFP

Kohli is known for his variety of shots, his capacity to chase and his ability to bat successfully under pressure. He is considered as one of the best ODI players, averaging at 51.

Kohli is not far behind in Tests either, as he averages close to 45 runs. The year 2014 was a difficult time for him as his 10 innings in England totalled to only 134 runs at an average of 13. His technique was brutally attacked by James Anderson.

Fortunately, he dug himself out of the mess by performing exceptionally well in late 2014 in Australia. In 24 innings in Australia, South Africa and New Zealand, his average was an exceptional 64.26 runs with seven centuries in 12 Tests.

At only 27, Kohli has plenty of time to flaunt his tremendous talent and become a true heir to Sachin Tendulkar.

At 26, he is already averaging 60 runs, higher than anyone else currently playing the game.
Photo: AFP

It is unbelievable to think how Smith started out as a regular leg spinner and reinvented himself to become one of the best batsmen of the world. He was recently awarded the Sir Garfield Sobers Trophy for being named the ICC Cricketer of the Year as well as the Test Cricketer of the Year for 2014-15.

At 26, he is already averaging 60 runs, higher than anyone else currently playing the game. Smith, the right-hander, employs classical textbook strokes and is at ease with spin bowling. He doesn’t fail to amuse and admire fans since he performs brilliantly in every setting, be it home or away. As Captain of the Aussie-side, Smith appears to be inching towards greatness and establishing himself as one of the best Australian cricketers.

Williamson has one of the soundest techniques when it comes to retaining batting on the pitch. Ian Chappell praised him in the following words,

“Absolutely, he’s one of the best players in the world at the moment.”

Williamson, at 25, is already averaging almost 50 runs. He seems destined to become Kiwi’s all-time best, even surpassing Martin Crowe.  He is an all-rounder, equally at ease when it comes to batting or spin bowling.

I feel Williamson’s form, development and superior technique make him the strongest contender of his generation.