H is for Hawk and B is for Brilliant 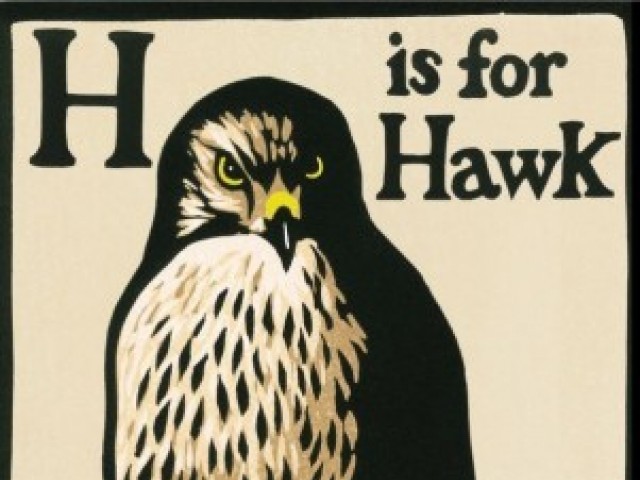 The book deals with big subjects; death, depression, solitude, gender, and class yet it is so humane, so unadulterated by heftiness, that ironically, it feels light like a bird’s feather. PHOTO: AFP

Helen Macdonald’s searing and savagely beautiful memoir, H is for Hawk, is a unique and sublime meditation on loss and identity. On its surface, H is for Hawk is essentially a vibrant and mesmerising account of taming and training of a young female goshawk, however, the premise and the depths of Macdonald’s sumptuous writing make this book go far and beyond the realms of traditional nature writing. It is a book that encompasses various literary traditions to create a reading experience that is as heart-warming as it is heart-stopping.

At the beginning of the book we meet Macdonald who is in her thirties and is at Cambridge pursuing a fellowship. One day she hears by phone that her father, a successful photo-journalist, has died unexpectedly. In the wake of his death, unmoored by sorrow, she buys a goshawk and names it Mabel. Macdonald deliberately retreats from the human world, secludes herself, unplugs her phone, and abandons all contact with her friends. In an attempt to gather her bearings she embarks on a steady and arduous journey of training one of nature’s most ferocious and notoriously untamed predators.

Growing up with an ardent obsession with birds of prey, Macdonald is experienced in training them. Hence, she knows exactly what to do. The hawk fills Macdonald’s life with an uncanny wildness and madness. Macdonald, armed with all the necessary equipment: the leather hood, bells, transmitters and straps, leaves no stone unturned in trying to tame the feral creature she has acquainted. She stocks her freezer with dead chicks to feed and train the hawk. The training proceeds, but of course, not without glitches. With each fortuitous step forward there is an abrupt leap backward.

Macdonald reminisces her phase of erratic mourning and realises that the process hasn’t been devoid of any transformations. She reflects:

“What the mind does after losing one’s father isn’t just to pick new fathers from the world, but pick new selves to love them with.”

Gradually, the reader and Macdonald, both, get acquainted with Mabel. While Macdonald relishes the surreal silence that befalls her home when Mabel is asleep, the readers revel in the cacophony of the hawk’s play. Macdonald’s writing is so evocative and so deceptively atmospheric that the reader can feel every mood, hear every sound. With the passage of time, during this odyssey of training a goshawk, Macdonald is training herself, too. The two, inseparable now, feed off of each other. Each satiates the madness of the other, brings the walls of the prison each inhibits, crumbling down. Soon enough, Macdonald feels what Mabel feels.

Macdonald transforms our image of hawks or of any feral animal for that matter. She challenges the coterie of preconceived and misinformed notions that deny us the ability and opportunity to see things as they truly are.

“Wild things are made from human histories,” she writes.

In seeing her hawk for who she really is, she comes to see herself with more lucidity and clarity.

Eventually, scrapes and wounds become a part of her life. Macdonald’s identity shifts so vehemently that she thinks that she is mirroring Mabel. And often, when she is not in her hawk-like attire and steps into the human world to mingle with others, instead of feeling more like herself she feels that she is in a disguise. In coping with the vertiginous grief of her dead father she becomes so resolutely obsessed and addicted with falconry as if she were addicted to a drug.

Macdonald’s book is suffused with raw emotion, yet it never becomes sentimental. There are moments in the book that feel a bit histrionic and the prose feels dense and verbose with metaphors of schmaltziness. And though these moments are rare, the reader, absorbed by the fecundity of the prose, begins to savour them. The unexpected meanings that hide in the secret chasms of this wickedly smart book offer redemption for its maudlin scenes of self-drama. Macdonald injects such heavy doses of hope, optimism and redemption even in the most disconsolate scenes that the book becomes a soaring joy to read.

H is for Hawk seems to be an instant classic of nature writing. It deals with big subjects; death, depression, solitude, gender, and class. Yet the book is so humane, so unadulterated by heftiness, that ironically, it feels light like a bird’s feather.