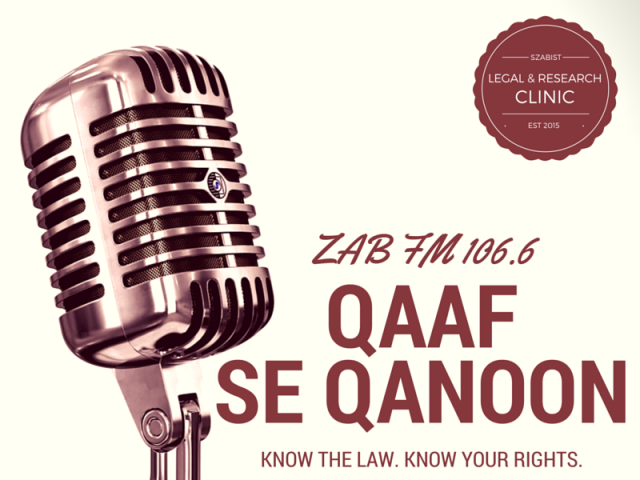 The show was much needed since it addressed the issues a citizen has to face when getting an FIR registered. PHOTO: QAAF SE QANOON FACEBOOK PAGE

Good things should be appreciated and promoted, a recent example would be Qaaf se Qanoon, a radio-show, launched on ZAB FM 106.6.What this show seeks to do is spread legal literacy amongst the masses. The show is being aired in Karachi every Monday, from 6pm to 7pm. Those living in other cities can listen to the show online on either ZAB FM’s website or on Soundcloud.

Qaaf se Qanoon is part of the ‘SZABIST Legal and Research Clinic’; project initiated by Shaheed Zulfikar Ali Bhutto Institute of Science and Technology’s (SZABIST) faculty, current students and alumni. The main purpose of this clinic is to advocate the socio-economic, civil, political and human rights of the citizens of Pakistan. According to the team responsible for this initiative, knowledge is empowerment. In other words, knowledge about your rights is the first and foremost step towards achieving empowerment.

The show kicked-off with an episode on the First Information Report (FIR), which is the basic document required to report a crime. It is the first step towards seeking justice and it sets the criminal justice system in motion for investigation. In theory, this process is fairly simple, however in practice, it is a very difficult endeavour at achieve in Pakistan. The hurdles are one of the reasons why Pakistan is at 98 among 102 states on the Rule of Law Index 2015. Police officers often refuse to register an FIR, and citizens return from the police station feeling frustrated. In fact, many do not even bother going to the police station to report a crime, for example; in case of a mugging incident, due to the lack of faith in the police force.

What I liked most about this show was the fact that it addressed the issues a citizen would face when getting an FIR registered. It informs the audience that it is every citizen’s right to have a complaint registered in the form of an FIR, and as per section 154 of Pakistan’s Code of Criminal Procedure, under no circumstances can a police officer refuse to register an FIR.

The second episode was about youth care and child protection, again a problem which needs immense attention. There are 25 million out-of-school children in Pakistan according to a study by Alif Ailaan. 3.4 million children in Pakistan are engaged in child labour according to a report published in February 2015 by the International Labour Organisation (ILO). Moreover, as per the World Report on Child Labour 2015 by ILO, there are 1.7 million adolescents (15 to 17-year-olds) who work in hazardous conditions in Pakistan.

During the show, the guest and the host delved into laws related to child sexual abuse, child labour, child marriage, right to education and other fundamental rights of children and adolescents. Thanks to the show, I now know about the existence of The Workers’ Children (Education) Ordinance 1972, which states,

“Every employer of an establishment in which the number of workers employed at any time during a year is four or more shall pay to the Provincial Government an education cess at the rate of one hundred rupees per worker per annum.”

The clinic also has a Facebook page and a Twitter account which spreads legal awareness. On the page you can find informative wall-photos on the legal aspects of marriage and divorce, child custody, consumer rights, workplace harassment etc.

In the past the clinic has arranged legal awareness workshops for the community on topics such as marriage and divorce laws, property and labour laws.

Often we are taken advantage of because we are not aware of our rights guaranteed by law; we are further unaware of what legal recourse to take in case our rights are somehow being infringed. Through our lack of appropriate reactions, such as filing an official complaint, raising our voice against injustices and shedding light upon other issues which are harmful to the society and the environment, we give consent to these injustices and this gives confidence to the wrongdoers to continue to break the law, infringe the rights of others and commit crimes. Therefore, it is our responsibility to be aware of our rights, to raise our voices against crime, and to further educate those around us.

Julian Assange has put this aptly in the following words,

“Every time we witness an injustice and do not act, we train our character to be passive in its presence and thereby eventually lose all ability to defend ourselves and those we love.”

Last but not least, one of the best aspects of this initiative is that not only is the show in Urdu, but the information provided on social-media is also available in Urdu, so that it can reach the masses. It is our duty as part of the educated class to inform ourselves of the legal consequences to things that take place in our everyday lives – it is also our duty to spread the knowledge. Passing this information to people who do not have access to the internet or the radio, for example, your domestic and office staff is not only helping them, it is doing your entire nation a tremendous favour. It is the effort you put in explaining these little things to the people around you that can make a big difference to the future of our country. Don’t be taken advantage of – know your rights!