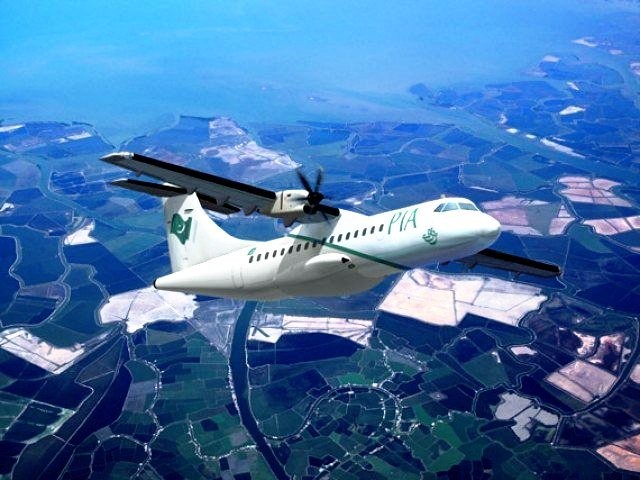 Two of PIA's ATR 42-500 turbo-prop aircrafts had to make emergency landings after suffering from technical faults. Both landed safely with one engine off, September 3, 2011. PHOTO: COURTESY ATR

The business of the state is to run the state and to govern it for greater public good. There are no two opinions about this. That, in this day and age of corporatisation and decentralisation, means the state should not be running banks, airlines and factories. Rather it should focus on setting up regulatory authorities and let them run companies which provide these professional services.

The jury is still out on the economics of privatisation of State assets. The previous examples of PTCL and UBL are being bandied about on how the imperatives of transparency and profitability were bypassed. But what about the human cost of such measures? The International Monetary Fund’s conditionality’s, and election promises made in the manifesto of PML-N state that, “PIA shall be transformed into a profitable and reputed airline of the region,” notwithstanding.

The morphing of transformation into the PIA privatisation fiasco has now translated into a tragedy after the death of two of the protesting workers in Karachi. This will understandably overshadow the narrative of the colossal loss to the national exchequer because of years of accumulated mismanagement and inefficiencies, political meddling and downright corruption from all the parties who are now pointing fingers at others.

All these factors had snowballed into the debate on privatisation. Not restructuring, not right-sizing, but privatisation, because the rot had set in too deep.

Again, understandably, the employees are the ones making the loudest noise because they are the directly affected party. They are the first to feel insecure in the event of the change in status quo. The debate of whether they were employees on merit or otherwise has to be taken place on another level. But the employees also need to understand that the clamour did not generate too much public sympathy because of the abysmal level of services the travellers had been exposed to.

That awkward moment when PIA issues boarding passes with seat numbers that don't exist on the plane. #onlyinpakistan

The slide down the slippery slope of deterioration had been steady and rapid. Everything an airline prides itself on, such as punctuality, aircraft maintenance, ground as well as on-board service, fare structure, the meals, customer care and handling became points of irritation and annoyance. The lack of responsiveness tipped the scales in favour of the argument on privatisation, not in an economic term, but in terms of getting it out of the hands of whoever was running its affairs into more competent and professional hands.

The slide of the National Flag carrier, which had once monopolised the skies, became all the more stark when passengers were exposed to a greater choice with other private airlines. It was not just enough now to hark back to the good old days when it was not only this airline that clocked many firsts, especially regionally. Yes, we know that PIA was the surrogate mother for Air Malta, Singapore Airlines and Emirates.

As a truly national institution, it flew aircrafts on routes not served by any other means of transport like the Balochistan coast, Gilgit-Baltistan and Chitral on subsidised rates. But it also did the same on uneconomical routes such as Karachi-Hyderabad and Lahore-Islamabad too.

It made great contributions to the field of sports through its teams, as well as culture through its Performing Arts Academy. But it also grew coconut and papayas and hatched chickens; too late to get into the good and bad of that now.

Maybe these ancillary services, which also provided benefits to the work-force, were also counted to be on a PIA payroll. Eventually they started becoming a drain in an era when corporations needed to be lean and mean. Like I said, too many factors combined to form a snowball.

Now the privatisation genie is out of the bottle. Though even a lay person like me is confused by the SOP of how divesting only 26 per cent of the shares would mean a total revamp of an organisation bursting at the seams.

Is there more than what meets the eye?

If the majority shareholding will remain the same, how will the management and operational processes change to turn this sick organisation around?

Another thing that perplexes me is while the employees in all other departments may be feeling insecure because of the fear for retrenchment, what’s up with the pilots?

Yes, overall the aircraft to personnel ratio (780 per plane) is astronomical, but there has to be more than just a show of organisational solidarity for them to jump into the fray. PIA does not have a surplus of pilots. Why are they protesting attempts to make the airline run on professional lines? What are their fears, unless they stem from their existing grievances and are not related to privatisation?

The total disruption in flight operations in the country which is going to hit passenger and cargo traffic is not going to garner them much sympathy either.

Protest, strikes and industrial action are rights of the workers under any lawful and democratic set up. PIA workers have legitimate fears about their future. The plan of privitisation was not revealed out of the blue. The Aviation Division has been vetting and employing highly qualified consultants from across the world to assess its feasibility. However, the cloak and dagger manner in which this is being done is what has exacerbated the matter.

Why weren’t the employees informed of any severance packages or any other financial settlement in the event of a new management or a new arrangement? Yes, we all know about the pressure tactics used by the Unions. It happens everywhere where the management sees the Union as an adversary rather than an ally to run the company.

As far as the imposition of Essential Services that harkens back to the dictatorial days is concerned, the government also needs to know that it may just be painting itself in a corner with this hardened stance.

Another question to be asked is whether in the presence of other options, such as other airlines, is PIA a fit case for Essential Services? Yes, there is no other agency which can provide Air Traffic Control Services or run railways but now passengers have been getting from point to A to B, albeit with difficulty, because PIA is not the only option available. Have all the parties concerned in the case for PIA really lost it? Literally as well as metaphorically?