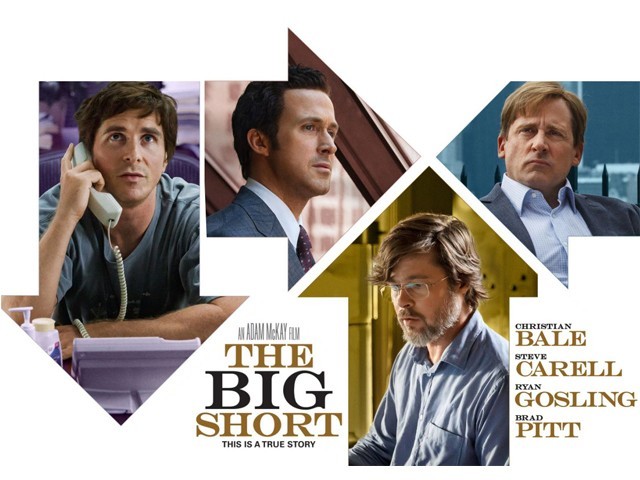 The central concept that the story revolves around is that before the financial crisis, the American banking system sold housing mortgage bonds, which were, for the most part, according to Baumer, “dog shit.”

A story with multiple characters, the main one being Mark Baum (Steve Carell), about the world financial crisis in 2008 and highlights the greed, fraud and utter misery that occurred as a result of it. Miseries like unemployment, loss of housing, loss of pension, and the downfall of Wall Street firms.

It starts off with the bombardment of finance related terminologies and people explaining the meaning of each term. The directors made this process entertaining by explaining it in unconventional ways; a memorable example of which was a scene when well-known chef and television show-host Anthony Bourdain talked about dumping fetid fish that nobody bought and put it into a stew that he, hypothetically, sold to people, to explain how customers may not even know that they are getting rotten fish.

Think Confessions of a Shopaholic meets The Wolf of Wall Street — economic concepts explained to the everyday man combined with almost the primal greed and immorality often seen in human nature. The central concept that the story revolves around is that before the financial crisis, the American banking system sold housing mortgage bonds, which were, for the most part, according to Baum, “dog shit.” One man, Michael Burry (Christian Bale), notices the discrepancy and realises that if the losses suffered ever rise to eight per cent, then that is doomsday. The collapse of the American, as well as other economies. Everyone thinks these people who predict the collapse have lost it, and so, they venture to make a profit on their prediction, by betting against the survival of the American economy. The fact that the percentage is like a ticking time bomb — four per cent, five per cent, will it reach eight?—adds to urgency and thrill of the movie’s intellectual experience.

The film has multiple recurring characters each knowing about the impending doom, and it shows how each of them plan to, fail to, and eventually succeed at gaining profit out of the disaster. Baum, the main character, starts off in the film an angry, disgruntled man who has just suffered a tragic loss. The most characteristic trait of his is that he is not afraid to tell anyone “I told you so” or that they are completely wrong. He doesn’t trust the system either, because he’s worked in banking himself. There was relatively less character development in this film. Eventually, he learns to open up about his problems and his personal losses, and stopped saying “I told you so” to people. This character arc, however, was not shown to the audience directly, just stated in the end credits, which in my opinion was not the best strategy because to the audience, he was just an angry man yelling at people. What I learned from this film is that human beings are always seeking authority figures who know what they’re doing, from lawyers to teachers to bankers, and that these authority figures know that people without their knowledge are likely to give them their blind trust. If I had to summarise the purpose of this movie, it’s to make its viewer realise the essence and importance of questioning authority, the masses, and basically everything, even one’s own knowledge. This brings into context a quote from Mark Twain displayed in the beginning of the movie:

“It ain’t what you don’t know that gets you into trouble. It’s what you know for sure that just ain’t so.”

The author recently completed his A' levels and is on a gap year. He tweets as @ @DanialNadeem9 (twitter.com/DanialNadeem9)

The Divergent Series: The birth of an Allegiant leader

Orange Is the New Black: Changing perceptions and clearing misconceptions