Mian Iftikharuddin: The stranger in the house 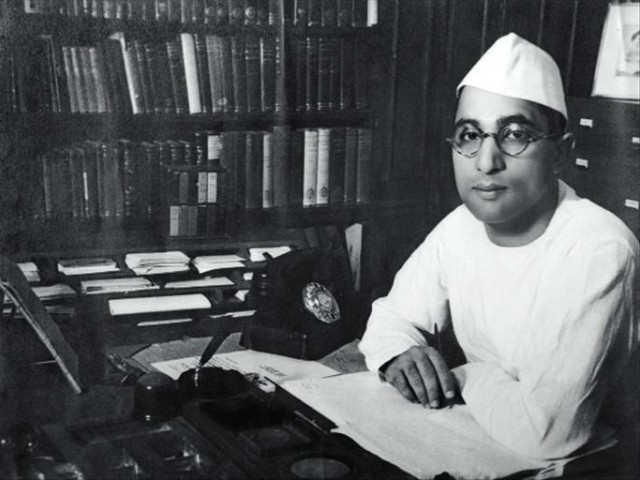 Despite having long standing affiliations with Congress, he voted for the idea of Pakistan in Congress Committee meeting. PHOTO: THE FRIDAY TIMES

On March 29, 1953, Mian Iftikharuddin said that it was regretful that the Army had stepped in to control the anti-Ahmadi riots, that the government had “shown a way to coup d’ etat” and hoped that “the Army will (sic) be relieved of its extramarital functions”

A statement made by a person with clear vision of a democratic future for his country, which appeared on the map of this world with name of Pakistan.

One man who stood out more than the others in his quest to transform the newly formed state into a modern, democratic and secular society was Mian Iftikharuddin. He was a left-wing Oxford graduate, the blue-eyed boy of Jawaharlal Nehru, also a deeply trusted confidant of the founder of this nation. Furthermore, he was an advocate of an independent foreign policy and civil liberties, for which he struggled throughout his life. He was born in the famous Arian Mian family of Baghbanpura Lahore, who despite having long standing affiliations with Congress, voted for the idea of Pakistan in the Congress Committee meeting. He left Congress in 1945 and joined the Muslim League on the request of Quaid-e-Azam Muhammad Ali Jinnah.

He was one of the seven managing directors to set up Progressive Papers Limited in 1946 and published a newspaper called The Pakistan Times. It was established in contrast to the newspapers like Dawn, which published frequently right-wing views. Faiz Ahmed Faiz and Iftikharuddin had an intimate relationship at the time, solely due to their secular and liberal views.

Faiz became the editor of The Pakistan Times. Founded under Jinnah’s patronage, The Pakistan Times was received enthusiastically and played a great role in motivating League workers in urban Punjab during the Civil Disobedience Movement. The Pakistan Times also faced great hardships after the coup d’état launched by President Ayub Khan, that led to military rule in 1958 and was constantly criticised by ulemas and right-wing extremists.

Iftikharuddin joined the Punjab cabinet in September 1947, as Minister for Rehabilitations of Refugees. After taking charge of the office, he quoted on the quorum several times that the successful rehabilitation of refugees is possible through the land reforms. He proposed many projects on the rehabilitation of refugees through land reforms, but dominance of large landowners could not result in any considerable law making. He was a staunch opponent of feudalism, army intervention in the democratic process and curbing of minorities rights. Moreover, he was denounced as the communist by Pirzada Abdus Sattar Abdur Rahman on the floor of the constituent assembly.

Moreover, he was the only Muslim member in the house who opposed the objectives resolution as he felt that the resolution was vague. He further suggested that such a resolution should be the decision of the 70 million people of Pakistan. This resolution was also disapproved by minorities’ leaders Prem Hari, Chandra Mandal and Kumar Dutta. However, he chose to vote in favour of the resolution, because he was assured that minorities will have all the rights and privileges in an Islamic state.

Unfortunately, the way minorities have been treated in the past and how they continue to be treated is no secret. Having said that, Mian Iftikharuddin was expelled from the Muslim League in 1951 for openly criticising their policies on every forum. Therefore, for whatever its worth, Pakistan should take considerable pride in his legacy. But that would be a very different Pakistan.

Not the one that conspires with religious fanatics for her illicit aspirations apparently for the greater good, notably in the context of India and Afghanistan.

Certainly not the one where the prime minister’s statements about making Pakistan a “liberal, democratic” nation are unwelcomed by self-appointed religious custodians of Islam.

Also not where minorities are suffering for not being Muslim.

Since he was an advocate of an independent foreign policy, free from demented generals and extrication from The Southeast Asia Treaty Organisation (SEATO), the Baghdad pact and other defense treaties, it was expected from his opponents to label him as a stranger in the house.

He died in June, 1962 and after his demise, the progeny of the Mian family never entered politics again. Faiz Ahmed Faiz, Iftikharuddin’s friend and ally, paid a tribute to him through his poetry:

(I was mountain when I stopped and when I moved I crossed my being,
O beloved path, I have, step by step turned you into a memorial)

The author has graduated as an engineer from UET Lahore. He is fond of reading and writing. He tweets as @IrFanHa115 (twitter.com/IrFanHa115)