Do we need Robin Hood to sustain economic equality? 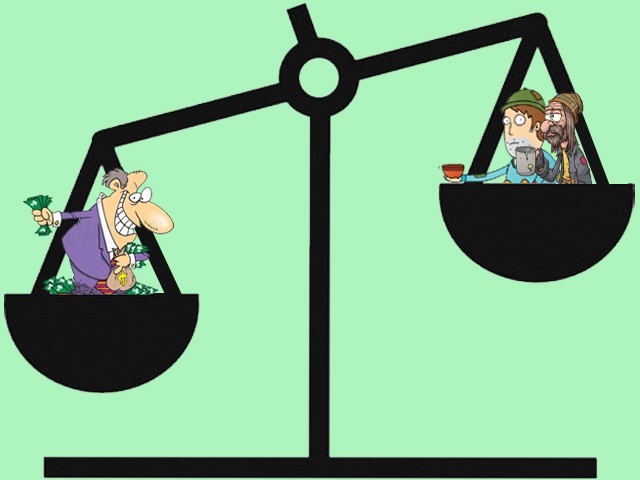 According to a report by Oxfam, the world’s richest 62 people now own as much wealth as half the world’s population.

In the year 2000, the Millennium Summit by the United Nations (UN) stemmed the development of eight chapters following the Millennium Declaration. The Declaration was adopted during the summit by world leaders. It strives to free all men, women and children from the dehumanising conditions of extreme poverty. This ultimately led to international development goals termed as Millennium Development Goals (MDGs).

Goal number one of the MDGs was to eradicate extreme hunger and poverty. The UN, while articulating these MDGs devised two targets:

As can be logically deduced, an equitable distribution of wealth has to be one of the primary mechanisms through which the above mentioned targets could be sustainably achieved.

Doesn’t this all sound absolutely peachy?

Our world leaders are able to visualise the prettiest of pictures, aren’t they?

Perhaps if Robin Hood had attended that summit, those goals could have been realised.

However, as we take on 2016, the situation is quite distressing. According to a report by Oxfam, the world’s richest 62 people now own as much wealth as half the world’s population.

Before your eyes completely glaze over and your pointer moves to close this tab, I urge you to visualise this statistic. Think about what this means. Let me help you imagine what the world’s wealth distribution looks like.

The money that those 62 people have is enough to sustain the lives of 3.5 billion people.

While there are those struggling to pay for education, food, healthcare and other basic needs, 62 people out there have amassed enough wealth that could provide those facilities to 3.5 billion people.

The wealth of the poorest half of the world’s population has fallen by a trillion dollars since 2010. It is predicted that soon those 62 people would own as much wealth as all 7 billion of us. This means that many more would be pushed below the poverty line to keep up the affluence of the world’s richest.

Inequality does not, however, only contribute to the incidence of poverty; the consequences are far wider in scope as an understanding of inequality is fundamental to an understanding of justice and human rights. In other words, lack of action to realistically tackle the ever increasing economic inequality could potentially mean increased social unrest, leading to even lesser opportunities for the economically under-privileged persons to pull themselves out of poverty.

So while most of the world will fall into turmoil, 62 people would be personifying the lifestyles of kings.

Inequality and poverty are additionally linked to people’s perception; to the struggling masses, the perception of affluence, as flaunted by displays of wealth, leads to resentment and social marginalisation. Pakistan has already tasted the bitter truth of economic disparity; during the 1960s, economic inequality fueled the demand for provincial autonomy in East Pakistan – that demand later cultivated into a movement for Bangladeshi independence in 1971.

From a global perspective, one can argue that humankind has come a long way to address the problem of poverty and unequal distribution of income and wealth through globalisation policies, increased market access, better technologies and enhanced efficiencies, but statistics show a stone cold picture.

Although it is well established that inequality and poverty are closely related, governments traditionally have focused on economic growth as the path to lower the incidence of poverty. Consequently, efforts to tackle economic inequality have been inadequate.

Economic inequality is rising, instead of going down. Take China’s a case as an example. A third of the country’s wealth is now concentrated in the hands of one per cent of its citizens. About a quarter of a century ago, China’s Gini coefficient was 0.45 but by 2012, it had risen to 0.73 (the 0.4 mark is seen as a predictor of social unrest).

Therefore, if we believe that world poverty is being reduced by measures taken by international summits, we would be sorely mistaken. It is time we open our eyes to our own reality.

Oxfam has calculated that if inequality in the Latin America and the Caribbean region were to be reduced by five points between 2011 and 2019, some 17.4 million people could move out of poverty. If the opposite were to occur, an additional 18 million people will be added to those living below one dollar a day.

It is high time that national policy making institutions realise the fallacies of ‘trickle-down economics’. The world will have to stop fantasising that more wealth creation automatically benefits all humans, even when a large part of the wealth rests in the hands of a select few. The only thing that trickles down from such concentrated wealth is inequality, hopelessness and powerlessness, leading to unrest among the masses across the globe.

All this translates into a higher need for government institutions to get themselves involved in anti-poverty drives in a manner that does more than focus on increasing the per capita incomes in a society. Targeted interventions are needed in order to sustainably reduce the disparity in distribution of income and wealth. This calls for radical macroeconomic policy reforms in areas such as taxation and social security. Current anti-poverty policy trends also need to be revisited to view the economically under-privileged masses more humanely by taking off from the shoulders of the poor, the disproportionate burden of getting out from the clutches of poverty.