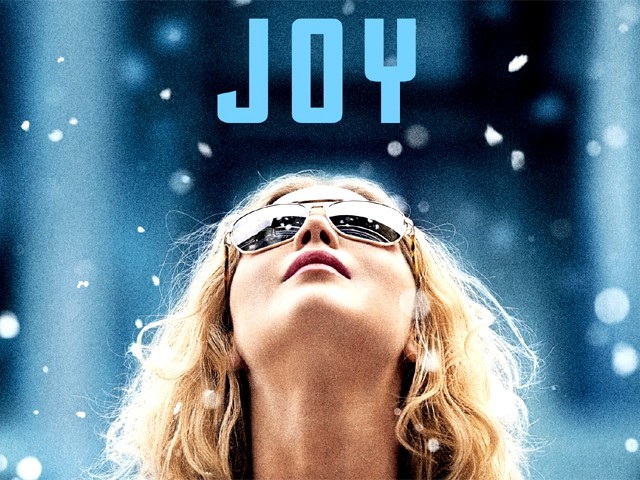 Now am I the only one around who thinks Jennifer Lawrence is a classic case of Emperor’s New Clothes. I keep expecting people to realise she isn't all that great and all the over-the-top praise and award nominations based on some bizarre media hype will stop. But luckily for her it doesn’t.

Let me get this straight right from the outset, some amongst us will always find a tale compelling where an underdog succeeds in the end despite the numerous odds , no matter how ineptly it’s told. And then there are others like myself who some will find a supposedly inspirational story about the manufacture of a mop dull if it is badly told, no matter how popular the lead cast is.

For a movie that is supposed be uplifting and inspiring, Joy ironically is pretty joyless.

This is a sort of film where you will have to decide for yourself. Some people might absolutely love it, while others would totally hate it, for reasons stated above.

Joy is a semi fictional biopic of home products inventor Joy Mangano (Jennifer Lawrence), who single-handedly created a business empire virtually out of nothing.

David O Russell teams up with Jennifer Lawrence yet again who plays the titular character and is currently vying for her second Oscar with a nomination for her portrayal of the real life inventor who despite living with a dysfunctional family and having innumerable odds stacked against her, manages to sell mops by bucket loads on a home shopping channel and ends up making a business behemoth out of it. Still of Jennifer Lawrence in Joy (2015)

Now am I the only one around who thinks Jennifer Lawrence is a classic case of Emperor’s New Clothes. I keep expecting people to realise she isn’t all that great and all the over-the-top praise and award nominations based on some bizarre media hype will stop.

But luckily for the tinseltown royalty, it doesn’t.

Don’t get me wrong, Jennifer Lawrence is not bad, only ridiculously overrated.

In this respect J-Law is similar to Hollywood empress Meryl Streep, who was over-hyped and over-cast for such a long time that you’d be stupid to say anything against her. I think what the duo also has in common is their Award Ceremony status, and the fact that they are both going to beat out other actresses for Oscars they don’t necessarily deserve. Still of Jennifer Lawrence in Joy (2015)

Meryl Streep made a career out of playing roles that she was miscast in, doing a good enough job and getting disproportionately awarded for versatility. Lawrence in Joy, like Streep, has awkwardly been cast as a woman decade older than herself. And now she is simply being praised for playing an unexpected role rather than the merits of her actual performance. Robert De Niro plays his usual modern-day loose screw father character. It breaks my heart to see De Niro going so low so quickly. This is after all an actor who graced us with characters like Don Vito Corleone in The Godfather II, Travis Bickle in Taxi Driver and Jake LaMotta in Raging Bull and seeing him doing cringe-worthy dads in the Focker series and Joy just makes one go all heartbroken. De Niro is either broke or they have some sordid blackmail material on him for the former Oscar winner to go for such mortifying character choices.

Now since this is a David O Russell venture, Bradley Cooper,who is a current favourite of the director, is also shoe-horned into the film as a forgettable TV channel executive. It is poorly directed to the point where it feels like there were multiple directors and the tone is all over the place.

One minute it’s a drama, then it’s an all-out comedy, it becomes a thriller at times before finally going back to being a drama. And with Joy being an underdog tale, this genre inconsistency makes it really hard for the viewer to empathise with the protagonist. Still of Robert De Niro and Jennifer Lawrence in Joy (2015)

Also, for a film that was made to inspire, there really isn’t any actual moral here like ‘the more you try hard, the likelier you are to succeed’, Joy’s grandmother made sure the message gets lost with an over-kill of ‘it’s your destiny’ kind of lines. Here is a line from the film,

“You are going to grow up and be a strong, smart young woman. Go to school meet a fine, young man. Have beautiful children of your own. And you’re gonna build wonderful things that you do in your room.”

Sounds like an advice an insufferable recently-turned-feminist teenager would give to a friend. So if somehow the main point of the movie was women empowerment – a notable cause indeed – it was presented in the most childish way imaginable.

If you have watched The Pursuit of Happyness, you’ve pretty much seen a better version of Joy minus the feminism. And if you still insist on watching it, go ahead! It is after all the best biopic ever made about a Home Shopping Network superstar.