David Cameron, why did you single out Muslim women? 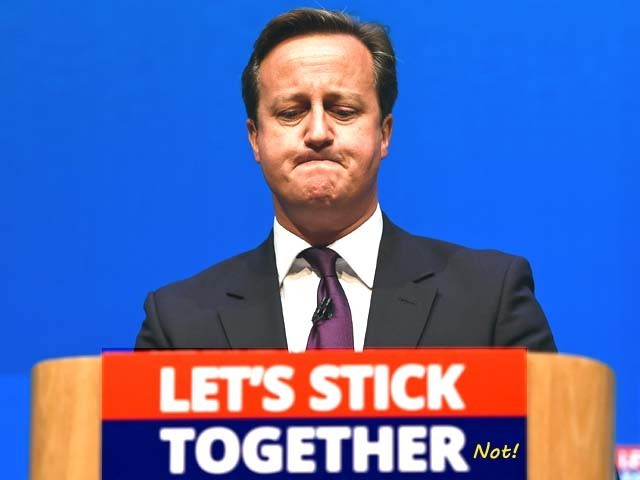 I fear Cameron is jumping onto the Muslim-bashing bandwagon that have become fashionable as of late, thanks to certified clowns like Donald Trump. PHOTO: REUTERS

The English language is a very peculiar thing. It can be difficult to grapple with its eccentric rules of grammar, punctuation and pronunciation. However it is a language that is fast becoming a necessary modicum of communication. The English language pervades social media, popular songs and movies and has even become a pre-requisite skill that one has to obtain before moving to the West.

I definitely agree that if someone from Pakistan or any other country, moves to the United States or England, they must have a basic idea of what the language entails, not because learning English will shed them of their own cultural distinctiveness, but to act as a way of seamlessly fitting into a new environment.

However, singling a particular ethnic or religious group out for deportation from a country, due to poor language skills is bordering on the absurd.

So it came as a real surprise when David Cameron donned his superman cape and attempted to save the English identity by stipulating that Muslim women who don’t learn the English language will face deportation.

He mentioned that Muslim women were susceptible to being targeted by extremist groups because they lacked English-speaking skills.

That made me chuckle. As if learning English will rid someone of a fundamentalist thinking.

Another quip that Cameron had was that Muslim women needed to do more to integrate and learning the English language would increase community cohesiveness.

Well Mr Cameron, I’ve spoken English all my life but am yet to know my English neighbours name or their children’s names. Speaking the language doesn’t improve community cohesion if the community itself is very reserved and prone to minding their own.

I also fail to understand why Muslim women alone must be targeted when people from all faiths and backgrounds who come to England can face difficulty in speaking or understanding English. For example, I once met an Eastern European woman who didn’t understand a word of English yet worked as a brilliant manicurist. She seemed to be happy with her level of integration.

Why must Muslim women be singled out alone? Does being a Muslim woman make one automatically assume that you are an automaton capable of only functioning according to your husband’s whims?

Does being a Muslim woman denote a missing brain incapable of rational thought?

I find Cameron’s efforts to promote integration by isolating a religious group rather oxymoronic. How is integration meant to take place if it is forced or coerced upon someone? If Cameron really wanted to prevent Muslim women from being seduced by Islamic fundamentalism then he should stop picking on them for being members of that particular faith.

Also, how does he plan to implement the deportation of these hordes of so-called English phobic Muslim women? How will the deportation bode with the Human Rights Act and the right to a family life? Such inflammatory statements require better aforethought, especially from such a seasoned politician like Mr Cameron.

I do think it is important to learn the English language when living in England but it won’t prevent extremist thought or even improve community relations. Some women, Muslim or not, don’t regard learning the English language as a priority. They are more than happy spending the rest of their lives cooking, cleaning and raising their children without ever learning English. Whilst this may not be right, it is a personal choice and Cameron risks intruding into the privacy of a family’s choices in his desire to becoming a pioneer of community cohesion.

To conclude, I fear Cameron is jumping onto the Muslim-bashing bandwagon that have become fashionable as of late, thanks to certified clowns like Donald Trump. I definitely expected better from someone as well respected as him and, as a Muslim woman who can speak English, am rather disenfranchised by the whole fiasco.