What if your child was abducted by the ISIS? 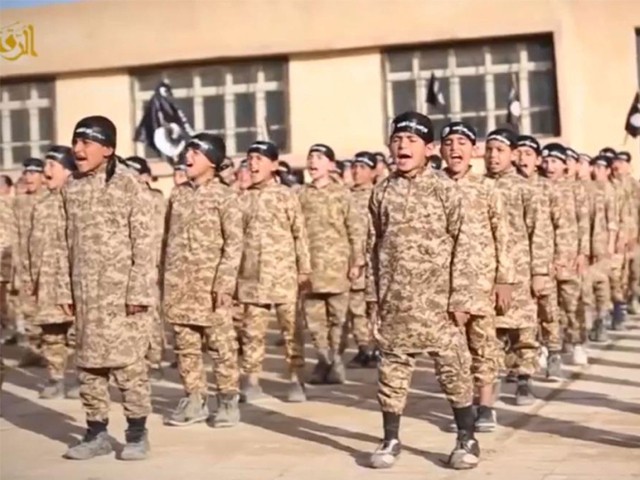 ISIS abducts hundreds of child soldiers who are 'tortured, raped or murdered' if they disobey orders. PHOTO: AFP

I read recently that ISIS has been abducting children and training them to become soldiers in its cause. I read the news story in horror, as it went on to say that the children were instructed to go back to their homes and kill their parents. I began to imagine what that scenario must look and feel like,

She got on all fours and started crawling. She was careful to make no sound, just as she was taught. She winced slightly as her knees touched the cold floor. Steadily, she kept inching on for a few more minutes until she reached the door to the little kitchen. Standing up, she squinted around in the dark. It took her a few minutes to locate it. Carefully hiding it behind her back, she got back on her knees and crawled back into the room.

Moonlight reflecting off the windowsill illuminated the room; she could see their silhouettes on the bed. The voice rang in her head,

Her blood started bubbling. Reaching him, she raised her knife wielding arm and stabbed her father, shouting,

Fortunately for the father, his five-year-old had accidentally gotten his arm instead of his heart. Crying out in pain, the father wrested the knife out of her hand and shook her out of the trance.

I named her Sarah, and tried to imagine what a child soldier in ISIS looked like:

Her delicate and innocent features are hidden behind a dark scarf that she wraps around her face as she was taught at the camp. She refuses to take it off. Her eyes though, are a sight to behold. Bewildered and fearful, they bear the marks of the time spent under the cruel tutelage of the ISIS.

As her face hides behind the impregnable veil of forced submission, the eyes say it all. They are alert and cautious. Regrettably they are eyes of a precious five-year-old but instead of being playful; they are overshadowed with doubt and misgivings. She has been taught to suspect, to judge, to hate and to kill eventually. Alas, she is not the only one.

ISIS wants them to be brave and heartless. These tiny humans have been trained quite thoroughly in the art of killing ‘infidels’ which includes their parents too. They were told that your non-believer parents who brought you up without the ‘proper guidance’ of Sharia are the real culprits and one day when you see them again, finish them off. You will be rewarded with the highest place in heaven. This is the lesson that these children receive. Instead of alphabet books and shining geometry boxes, they learn how to hold gleaming guns in their tiny hands.

The cruelty of this program is beaten only by its ingenuity. An army of minors equipped with heavy weapons, adorned in suicide jackets, facing seasoned and older men on the other side among which many are fathers themselves. Those grown up men do not stand a chance. How can a father, any father, be expected to kill a child who may be of the same age as his own child back home? Who with even a tiny shred of consideration can shoot a bullet at a child?

This inhumane plan has success written all over it. Thus, the ISIS numbers persevere. The audacity does not end here though. There have been consistent releases of videos by the terrorist organisation portraying the vast array of training equipment and methods being used on little children from the ages of five to 12. They claim to have kept the children well fed and clothed; however their skeletal bodies covered in rags escaping the training camps tell an entirely different story.

A few among these children have been returned to their parents in different parts of Iraq and Syria. However there are countless others still in the clutches of these heathens. The worst part is yet to come though. Even if they are rescued and brought home safely, what is to say that they will return to their former selves’ completely? Have we invented a machine or methodology to completely obliterate the memory of the horrible experiences that reside deep within the folds of human brain yet?

No, not yet. So even if those countless innocent children are rescued from a lifetime of enslaved violence, rehabilitating them into normal lives would be a herculean task. Those who wouldn’t be fortunate enough to escape or be rescued will grow into senseless violent men with rigid beliefs and dangerous faculties, a danger to the society. It is not only abduction or abuse of children; it is the destruction of the future of mankind. Let us drop our differences of sect and religion to join hands in fighting this evil so that we don’t wake up in the middle of the nights to see our five-year-olds attempting to stab us to death.