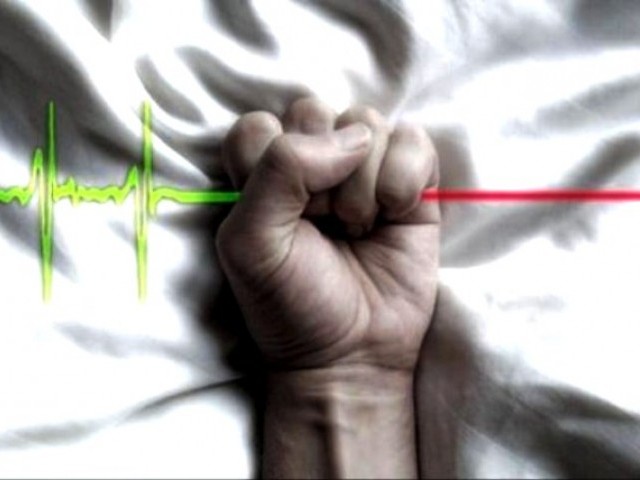 Pakistan is a 68-year-old patient, well known to our oncology service, here to see me in clinic again for an acute flare of the above-mentioned symptoms. PHOTO: SPL

History:  Pakistan is a 68-year-old patient, well known to our oncology service, here to see me in clinic again for an acute flare of the above-mentioned symptoms. Briefly, the patient has been plagued with cancer for the last many years. It has lost over 50,000 of its cells to tumour growths all over its outside body, mostly concentrated in the head and neck area. Over a year ago, the patient visited one of my colleagues with a huge tumour that had revealed itself in its Peshawar territory.

And now, the patient is here to see me again for another growth that clinically seems to be of a similar nature, and is associated with an acute worsening of his cancer symptoms.

Once again, the target of this tumour was harmless young cells in the patient’s Charsadda territory. Twenty-one cells have died and many in the vicinity have been left injured.

All body parts seem to be in severe pain at this time. The patient also complains of headaches, high fevers and a sense of insecurity and depression. Before coming to see me, the patient indulged in self-medication with 2mg of morphine, which barely seems to be effective in alleviating the pain.

As usual, the patient showed up late for the appointment, and so I had the chance to investigate the case in-depth. As per the documents that were scanned into the electronic medical record, the patient had been feeding on carcinogenic substances for the last many decades. Many doctors tried to instil some sense, but the patient consistently ignored medical advice.

Unfortunately, the patient was formally diagnosed with cancer a few years back, but continued to remain in denial about the diagnosis for a long time. In fact, until recently, it ironically wore the cancer as a badge of honour. The patient underwent screening of the whole body and its disease was found to be metastatic, spreading to all its internal body organs without exception. The patient consistently refused life-saving chemotherapy.

After years of constant pressure from friends and medical professionals alike, the patient finally admitted in December 2014 that it had a medical problem. It agreed to embark on surgical removal of the tumours on its surface. A seemingly powerful surgeon by the name of Zarb-e-Azb was employed to this end. And it seems as if the tumour growths have slowed since then. But three recent growths, including a big one in its Charsadda region, seem to have – as expected – put this treatment strategy into question.

Important as it may seem, excising an external tumour in a body ridden with metastatic disease only provides temporary cosmetic relief. Without a serious look at the cancer cells that produce these tumours and continue to eat the body from within, cancer can never be defeated in the long-term.

And it is not as if the patient does not know this. After decades of repeated medical advice to initiate a long-term and definitive treatment plan with chemotherapy, the patient finally willingly agreed to undergo chemotherapy last year. Many doctors had said it was already too late and this would be a futile attempt, but some were still optimistic.

A seemingly powerful chemotherapy regimen – National Action Plan (NAP) – was chosen for Pakistan. It looked wonderful on paper. And doctors were glad that the patient had finally recognised it had severe metastatic disease within, which was feeding its frequent tumour growths outside. NAP was meant to attack and disarm all cancer cells inside the body, and empower the patient’s natural immune system. I was one of the optimistic physicians who believed the plan, if properly implemented, would put the patient’s end-stage disease on the path to cure.

But after going through the patient’s blood tests and imaging results from last year, I am utterly shocked. Frustratingly, the cancer continues to spread.

Is NAP not working?

A careful study of Pakistan’s treatment records revealed that although it was reportedly taking the recommended NAP regimen as prescribed; it had not gotten any meaningful dose. The patient was found to be non-compliant and unreliable. Cancer cells were growing just as fast and continuing to eat its tissues from within. While these cells were successfully identified, a conscious choice was made to leave them alone. In some cases, the cancer cells were nourished and protected from NAP. Ironically, and to the great dismay of my clinic staff, the patient had recently used the powerful chemotherapy regimen to kill its own immune system. This was a unique case in medical history. On December 2, 2015, for instance, records show that the patient used NAP to paralyse an experienced fighter cell that had dedicated its life to fighting the cancer from within.

Assessment: In my assessment, the patient is either deliberately ignoring the recommended chemotherapy (i.e. is suicidal, or does not have an idea of the severity of the disease, or is ignorant). Though it tries frequent cosmetic surgeries to make itself presentable, the patient is definitely not serious in fighting its underlying cancerous disease. Its cells continue to die and be paralysed; and all the patient does is make fun of them by refusing them the chemotherapy that could potentially be life-saving.

2)    Re-institute chemotherapy regimen after thorough understanding, with plans for home hospice if patient still remains non-compliant. Palliative care consulted to be on board.