Why do you stare, Pakistan? Do women on wheels freak you out? 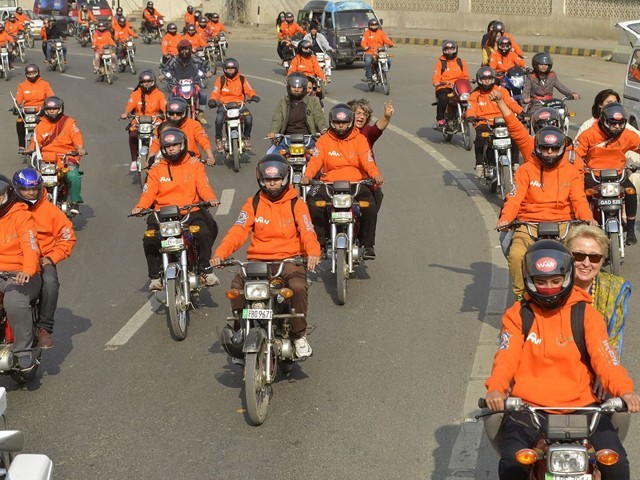 Why Blaha’s experience struck a chord in me is because, for some reason, traffic patterns in our fair country have always resonated with me. PHOTO: AFP

Austrian Ambassador Brigitta Blaha is an active power woman. She is the type of diplomat who promotes her country but doesn’t rub nerves, because she equally promotes the country she is in, wearing their clothes, meeting their people and participating in their events.

So it was no surprise that she was invited to Lahore, for the much-hyped Women on Wheels initiative by the Punjab Chief Minister Special Monitoring Unit on Law and Order and UN Women. True to type, she got into the car with Asma Khan, founder-director of Satrang Gallery in Islamabad, and drove right over. And then traded her four wheels for two.

The day after the event, she came over with Asma for a cup of tea, and told me about the event: How the participants assembled at that nucleic hub of cultural Lahore, Alhamra Art Gallery, which she knows well because her embassy is planning some music and art events there. As she tells it,

“I saw many familiar faces there, ministers, as well as some fellow diplomats. Up on the balcony I saw many young women in orange – participants in the event.”

She talked about a qualitative study done in 2011 that talked of ‘good’ women by Pakistani standards. That woman does household chores, cares for her children, husband and in-laws (of course), is unselfish, calm, tolerant, empathetic, reliable and is able to organise hospitality within the home (and cook superlatively, I suppose).

But when push comes to shove, she is also expected to be a cash cow. What Pakistanis want, then, is an income-generating saint. But if she hails from a middle-class family, can she clamp that helmet on her head and get on her husband/brother/father’s motorbike? Weave in and out of traffic without everyone staring at her as if she is a mobile freak show? Ummm.

Why Brigitta Blaha’s experience struck a chord in me is because, for some reason, traffic patterns in our fair country have always resonated with me. Back in the days when Lahore wasn’t as macho as it is now, I used to ride my very cool blue cycle to Kinnaird College, and only once was I subjected to unwelcome male malevolence.

I also tweet my complaints to Chief Minister Shahbaz Sharif regularly, acquainting him with facts that he might not notice from his motorcade; from minor traffic-police peccadillos (like being stuck on side roads while the warden is MIA) to advice on how to generate more income (like fining those building projects that have brick and cement spill-overs on the road). Not got an answer yet, but waiting.

Why are stringent driving tests not instituted to avoid the horrific accidents we see every day? @CMShehbaz #AccidentMultan/Kasur

It's an ego-booster building overpasses et all, but point is I'm stuck in main market side lane with no traffic warden in sight @CMShehbaz

Then, I have some experience as a woman driver. Men leer. Then they drive into your car because they think they are playing dodgem cars. Even if I am the archetypal bad woman driver, come on, I am minding my own business, keep your eyes on yours.

When I go abroad, I shed my chauffeur-driven car-weight for the easy mobility of smooth pavements. Living just off MM Alam road, then, I thought; why not use the newly built pavements to walk to a nearby salon? Why not walk across to the new restaurant just across the road?

Because there are brick spill-overs on the pavement.

And crossing that road?

Drivers speed up like Sandra Bullock on a runaway bus to mow you down, so you can either choose to be a sitting duck, or sit in that chauffeur-driven car and be stuck in traffic for 25 minutes to cross 200 yards.

And the new metro bus might be great, but will middle-class parents or brothers or husbands let you get on it?

I was discussing how we should all get on buses to lessen the traffic, and this woman goes,

“You mean we elites should ride buses?”

No, of course not, blonde bimbo.

Marie Antoinette’s famous, though perhaps erroneous, quote about bread and cakes came swiftly to my mind, but these blonde types are very difficult to argue with, so I let it go.

Back to Ambassador Brigitta Blaha. After many speeches, she said, everyone on that lovely Sunday morning moved to “the exciting part – the rally!”

“About 60 women from all walks of life who had participated in this project and were trained by the Lahore police were waiting to do a lap of honour, to symbolically show their newly-acquired autonomy. I got a ride with Nini, a young student who felt very comfortable on her motorbike and seemed happy and confident.”

I thought of Nini bravely breasting the currents of traffic and perhaps more dangerously, being accosted by alpha-type males who might want to bump her along on her journey (not to mention those leers). Then another thought crossed my mind,

But what if her husband or brother appropriates her motorbike? Will she be able to report it? Not likely.

Asma, born and raised in Lucknow and married in Pakistan, was the one who came to the rescue (and we all know there are many more female bike riders in India).

“You know? Instead of these manly motorcycles, perhaps they should have gone for bright pink scooters. Can’t see the men riding those.”

I couldn’t have thought of a better solution. But to all the women who have been given those motorcycles; my prayers are with you. Godspeed.

The writer was an editor of Libas Pakistan and Hello! Pakistan. She is now editor-in-chief of T-Edit. Her poems have been published in local and foreign journals and she has been nominated for the Pushcart Prize. She tweets as @MehvashAmin (twitter.com/MehvashAmin)