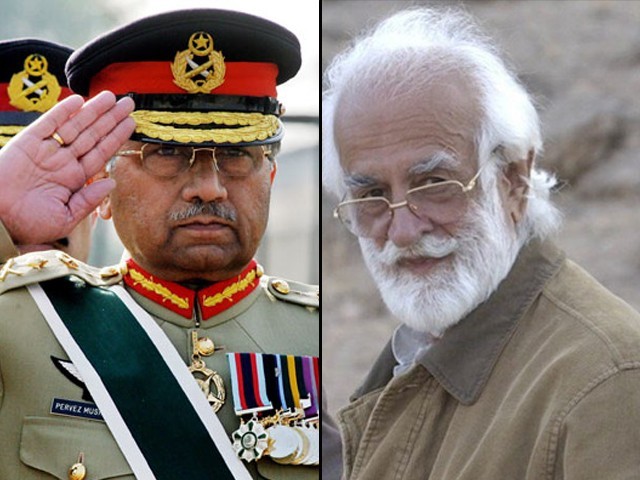 On August 26, 2006, Musharraf’s murderous hands finally reached him, and he died under dubious circumstances.

On March 17, 2005, bombs were dropped at my ancestral house in Dera Bugti on Pervez Musharraf’s orders. My grandfather, Nawab Akbar Bugti, and my father, Jamil Akbar Bugti, were in a tin roof bungalow within the perimeters of our living quarters. They felt the ground under their feet shake for four hours and then decided to flee.

Whenever my father recounts the story, he ardently says,

“We didn’t want to make it easy for them to kill us. We refused to be sitting ducks”.

As they headed to the hills, a string of bombs followed their footsteps. They were tracking my grandfather’s movements throughout. This operation was meant to result in his death.

Sixty-six people, most of them Hindu women and children, perished in the aggressive assault. For centuries the Hindu population has lived under the security of the sardar, within his living quarters.

“The very house that was supposed to offer them protection became their deathtrap.”

That day, the lives of my father and grandfather were saved due to sheer luck, and a little bit of fate.

You see, my grandfather was fated to die another day. On August 26, 2006, Musharraf’s murderous hands finally reached him, and he died under dubious circumstances.

Whenever I think about his death, Musharraf’s cold words ring in my ears and make me shudder.

“(I will) hit him from where he wouldn’t see it coming.”

To think that the Anti-Terrorism Court (ATC) has acquitted this murderer makes my spirit writhe in rage.

On March 23, 2005, a 15-member parliamentary committee, which included Sherry Rehman, came to inspect the damage that was done. My father recounted the entire episode of the bombing to silently apologetic faces. But nothing really happened. Nobody’s conscience woke up screaming and nothing was done to protect my family.

A few months after the March 2005 bombing, I went to Dera Bugti to be at my grandfather’s side. The muscles in my heart were taut with worry as I entered his tin roof house. I didn’t know back then that my grandfather, a man who lived in the most humble of circumstances, would be saddled with the label of luxury and opulence. He had entrusted the renovated house to his family and had retreated to a simple bungalow much like the ones in Quetta. In the enclaves of my memory, when I visit that house again and again, the contrast between his image of extravagance, which was constructed to harm his repute, and the reality of his simplicity, makes me shake with anger.

The pictures that were floating on the internet which depicted a cave of grandeur are fake. That’s not my grandfather’s house.

The truth is that everyone in this country has been made to believe certain things about him to serve a particular agenda.

I’m here to tell you that no, you do not know who Akbar Bugti was, and I refuse to let Musharraf dictate his legacy.

He was the man who opened up schools for girls in Dera Bugti when there were none.

He never supported the Balochistan Liberation Army (BLA) and did not have any separatist agendas.

He did not live the life of a millionaire. In fact, his modest ways were utterly humbling.

He was a loving and affectionate grandfather, who used to spend time with his grandchildren as often as he could.

Some of my favourite memories of him are when my cousins and I used to have interesting conversations with him.

The day I visited him after the first bombing, I opened my eyes to his real grandeur; the way that he held himself in the most dignified manner. He did not seem afraid, even though an attempt at his life had been made. As I was leaving his house, I hugged him goodbye. The muscles in my heart had not loosened. And I couldn’t help myself from sobbing on his shoulder. I clung to him like a child latches onto her father, when she senses that the father might leave.

My gut told me it was the last time I would see him. Dread seeped into my soul and time proved me right. I lost my grandfather.

That bitter taste of doom found its way into my taste buds once again, when I read the news about Musharraf’s acquittal. Whatever disease that plagues our justice system that led to such a verdict needs to be dealt an antidote strong enough to eradicate all traces of it.

I like to think about what happened in the courtroom when Musharraf was told he was free to go. In the privilege of my imagination, I visualise hyenas telling a hyena that hyenas can’t be jailed.

Musharraf had a personal vendetta against my grandfather. Under the military mantle, he was able to carry out crimes that have put humanity to shame. Sometimes I wonder if he has a conscience. His lawyers approached my father with an apology from him. My father waved them away and did not accept it.

Musharraf, atonement for ones crimes does not come through the sentence,

“I’m sorry I killed your father.”

Whatever apology he presented, he retracted it swiftly and told the world he had never approached my father, Jamil Akbar Bugti.

The fact is that I will never forgive him for the murder of my grandfather, Akbar Bugti, on August 26, 2006.

I will never forgive him for putting huge locks on his coffin and not allowing us to bury him. I don’t believe anyone else’s coffin has ever been locked away in this manner. But guilt can make you do many things, can’t it Musharraf?

I will never forgive him for making it impossible for us, his family, to mourn his loss, or visit his grave.

I find it unequivocally sinful that the ATC has forgiven him.

I pray that soon this country will see a day when hyenas too can be in handcuffs.

My family and I will not rest, will not attain peace, will not back down, until Musharraf is behind bars and made to pay for his crimes.

The author is the daughter of Jamil Akbar Bugti and the granddaughter of Akbar Bugti. She was born in Denmark and raised in Karachi and Quetta. She works as a graphic designer, is a co-creator at MoonBug, and lives in Karachi.