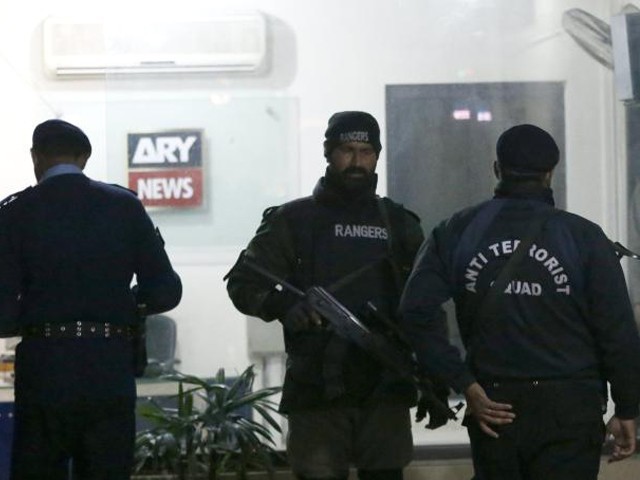 I have accepted that the state cannot provide appropriate security to me or my colleagues during the course of our work. But as a citizen, does that mean that whenever the threat level against the media is high, I should ask my elderly parents to get out of the house and roam the streets? PHOTO: REUTERS

Violence against journalists must always be condemned, but what about the collateral damage caused to common citizens by a media houses’ flouting of the law?

Besides the defiance of the law of the land, the nature of operation of this particular business exposes residents to an unnecessary threat. When the terror threat level is high, state security will tell people to avoid commercial areas and stay home.

Media houses usually relay such statements verbatim, but might avoid offering this disclaimer,

“Media houses are a prime terrorist target and if you live near one, you may be putting your families at risk by following these orders and staying at home.”

My family lives up the street from the office, which is one of half-a-dozen offices and schools illegally operating out of houses in the street.

On Wednesday, hours before the attack, I covered a CDA anti-encroachment operation where illegally placed goods outside some shops were confiscated. Yet, despite Supreme Court orders to address land use violations, I have never seen or heard of a CDA Enforcement team clearing out these offices.

Maybe it has to do with the fact that some of the properties and businesses are owned by people who wore brown outfits for most of their youths. Who cares about a common citizen’s privacy or quality of life?

As a journalist, I have accepted that the state cannot provide appropriate security to me or my colleagues during the course of our work. But as a citizen, does that mean that whenever the threat level against the media is high, I should ask my elderly parents to get out of the house and roam the streets?

The media is often criticised for its failure to cover certain issues which may be deemed sensitive or ‘no-go’ for a variety of reasons. For an insider, the most blatant example of this is when journalist Matiullah Jan got into trouble for reporting on the misdeeds of black sheep among journalists, all because of the ‘rules don’t apply to us’ mentality that dominates many in the circles of power (or in the case of some journalists, even those with no power).

The offices of Express Media Group have suffered multiple attacks, but the impact of these attacks on the daily lives of common citizens was limited, because the offices are all in commercial areas, as the law states. The same is the case for most other large media outlets, including The Express Tribune’s direct competitors.

Now I can understand why a fledgling start-up business might need to operate out of a house to cut costs; ARY News is anything but that. It is a profitable multibillion-rupee company owned by a multibillion-dollar company.

On the flip side, the CDA has been slammed for razing slum homes of the invisible people providing many support services, including the CDA’s own sanitation workers, while ignoring violations committed by the high and mighty. The agency calls slum residents ‘squatters’, but takes no responsibility for its failure to provide low income housing in the city, which is also part of its mandate.

Businesses usually open shops in residential areas because the rents are significantly lower than commercial areas. They will often pay above the normal rent for a well-placed residential unit because they are still saving money, compared to commercial rent. The problem is that this drives up average rent and affects good, honest people who want to live near their workplace or at least in the same city as their offices. This is the ‘rent bubble’ effect of large home-based businesses.

As it stands, the people who keep our streets clean must live in filth because they can’t afford to live in actual houses.

In Dawn’s story on the incident, ARY News’s Rauf Klasra mentions how ‘the channel’s office was located quite close to sensitive installations such as the prime minister’s house, the interior minister’s office, and the offices of security agencies’, before going on to lament, ‘if terrorists can attack here, then I am afraid no one in the country is safe’.

Yes, but considering that all major media houses are regarded as being sensitive to attacks, why has ARY placed a terrorist target in my neighbourhood? Residential areas are designed to be lived in, not worked in, especially if your work creates a threat towards the life and property of neighbours.

This is a glass house situation. One cannot assume the right to criticise lawbreakers while broadcasting from an illegal office.