So you think cinnamon cream-cheese rolls are difficult to make? 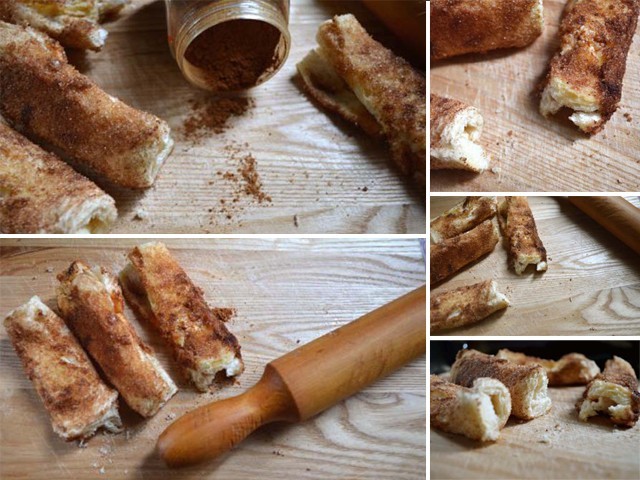 I came across this idea on Pinterest when I saw the lovely photos and decided that I had to make this right away.

I had just gotten done with my exams, on an endless rainy morning ,when I came across the idea of cinnamon cream-cheese rolls on Pinterest. I saw the lovely photos and decided that I had to make this right away! This is the perfect thing for a lazy weekend breakfast because it is easy and quick to make, and tastes absolutely great as well.

My rolls don’t resemble perfectly smooth roll-ups, because the bread that I used didn’t have exact square pieces, therefore I had to improvise by trying to trim the crust off neatly. I failed miserably and somehow forgot to dip the ends in the cinnamon sugar. Oh well.

That didn’t stop them from tasting so good.

Here is how I did it:

1. Remove the crusts from each slice of bread with a sharp knife. Using a rolling pin, roll about 20 pieces of bread as flat as possible, without tearing them.

2. Preheat the oven to 180 Celsius. Combine the cream cheese and a cup sugar in a bowl. Set this mixture aside.

3. Combine ¼ cup sugar and cinnamon powder in a bowl and set it aside.

4. Melt butter in a small bowl. Place about one tablespoon of cream-cheese mixture onto a slice of bread and roll it up. Dip the roll in butter and roll it into the cinnamon mixture. Place the roll on a greased cookie sheet. Repeat with all the slices of bread.

5. Bake for about 20 minutes or until crispy on the outside. Serve hot.

I hope you enjoy the cinnamon cream-cheese rolls as much as I did.

The author has an unleashed passion for baking, cooking and anything else she has time for. She tweets as @BitSweetHaven (twitter.com/BitSweetHaven)

These delicious mini Oreo cheesecakes are magical: They disappear within seconds!

This beef in oyster sauce will satiate all your Asian food cravings!